Since I read Peter Benchley's Jaws (eons ago), I have not been in the ocean; not even my big toe.  When  I saw the movie, I was one of the viewers gasping for air and lifting my legs up from the floor.  The combination of textual narrative and visuals will do that to you. 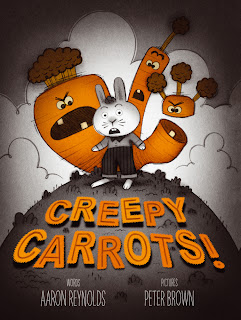 I don't think I'm ever going to feel the same sense of freedom or safety walking through the produce section in the grocery store any more either.  Author Aaron Reynolds has penned a title, Creepy Carrots! (Simon & Schuster Books For Young Readers, August 21, 2012) about a very peculiar bunch of veggies.  Eerie illustrations by Peter Brown pay tribute to Rod Serling's Twilight Zone in the best possible way.

Jasper Rabbit has a passion for carrots.  And the carrots that grew in Crackenhopper Field were the best.

Actually Jasper Rabbit has an obsession with carrots.  Every single time he passes this particular patch of land, home to these crunchy munchies, he grabs as many as he can.  But these are no ordinary carrots, these carrots are...ALIVE!

This carrot-craving bunny is not so far gone though that he cannot help but notice some strange sounds.  What's that noise?  Could it be the sound of roaming roots?

No, carrots can't move.  It must be this little hopper's overactive imagination.  Right?  Wrong!

Soon he sees them in the bathroom, the tool shed, in his bedroom and well, just about anyplace he goes.  The goosebumps-on-the-flesh part is he's the only one seeing them.  Then a hundred carat idea sprouts into Jasper's brain; the stupendous proportions of this plan are staggering.

It's surprising what fear-fueled adrenaline will do for one small rabbit.  But then, wasn't that the plan all along?  Whose plan was it really?

Reynolds's narrative is as crisp as those wily wandering plants.  His succinct sentences employ verbs actively creating a vision of Jasper's love of this food; pulled, yanked and ripped without costing him a single cent.  He makes JR's life seem as normal as the next person's...er...hare's...with his mention of school, little league practice, and home life.  There, of course, is nothing normal about

Peter Brown, an author ( You Will Be My Friend, Children Make Terrible Pets and Chowder, to name a few) and illustrator, brings his talents to these pages to create a deliciously, delightful spooky spin on the story. Initially drawing in pencil on paper the illustrations are put together digitally and colored to give us the chilling black and white, browns and oranges of his visuals.  His cover catches the reader's eye immediately, causing one to wonder if those angry Creepy Carrots! are going to do more than give the frightened rabbit the heebie-jeebies.

Endpapers show rows of carrots, like an advancing army of one's nightmares, with the occasional grin on some; careful readers will note the difference between the front and back depictions. The title, across two pages, mirrors a television screen at the introduction to a new episode.  In fact, the entire book is like watching an old television show; the art takes you back to an older time, a time when imaginations could and did run wild.

You have to love the way Brown conveys the range of emotions that flicker across Jasper Rabbit's face, appreciation, glee, questioning, panic, all the stages of fear and triumphant determination. Then too, there are the carrots.  Who knew eyes and mouths on vegetables could say so much.  My favorite flash back to the past is Jasper, bug-eyed and gasping with fright, splayed across a swirl of fiendish carrots.


Aaron Reynolds spins a haunting tale where "what-ifs" rule the day as Peter Brown works his illustrative magic.  This team gives new meaning to the word creepy in Creepy Carrots!  If you are out walking about in your local town, walking past that field or vacant lot that all towns have, whatever you do, don't touch anything; definitely don't pick the carrots!

Before this gem hit bookstores, I watched this video about the illustrative process Peter Brown used to create his artwork.  I knew I had to have this book.   I do love this book; another copy is on its way to my home.

The Creepy Carrots Zone from Peter Brown on Vimeo.
This video was recently posted on YouTube.