Nearly thirty years ago I was sitting in a local professional development meeting listening to a storyteller.  This storyteller, unbeknownst to me at the time, would open a door in my personal and professional life which has never been closed since that day. Sheila Dailey (Carroll), then making her home in the middle of the Mitten known as Michigan, told her listeners a pourquoi tale from the Mongolian people.

Told with a range of vocal intonations and through the use of a single instrument, she took her audience back in time.  As I gazed at all the adult educators seated in the room, it was easy to see she had them under her spell.  There was a timeless exchange taking place between teller and listener; an oral tradition. 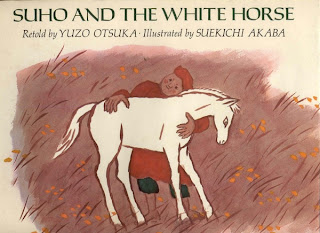 I knew I wanted to be able to tell a story, as she had done, to my students.  After searching I was able to locate a copy of the book on which her story was based, Suho and the White Horse (Fukuinkan Shoten Publishers, Inc., 1967--re-published under license by R. I. C. Publications Limited Asia) retold by Yuzo Otsuka with illustrations by Suekichi Akaba. (The newer addition is titled Suho's White Horse: A Mongolian Legend.)  The story within this book was the spark for expanding my role as a teacher librarian into a storyteller as well.

The first page of the book introduces readers to the location of Mongolia, the people who inhabit this region and to a very specific instrument native only to them, morin khuur or horse-head fiddle.  Only two strings are needed to make music and a horse's head is carved at the top of the fiddle's neck.  Living among these herders long ago was a shepherd boy, Suho, who made a life for himself with his grandmother.

Working as hard as any man he would tend their small herd of sheep daily, singing songs that rang out across the vast steppes.  One evening returning fearfully late, Suho stepped out of the darkness carrying something.  As neighbors surround him they could see cradled in his arms a newborn foal as white as snow.

Over time the colt and boy became inseparable.  As the years passed each grew in strength and stature.  One spring the governor announced a challenge; a horse race with his daughter's hand in marriage as the prize.

There was never any question as to whether the race would be won by the young man and his beautiful white horse but the events which followed were not as expected.  Suho and his companion were cruelly separated.  But as readers or listeners will discover even wealth and power has its limits.  Devotion such as theirs was not to be denied.

Otsuka's retelling, and the subsequent translation by Richard McNamara and Peter Howlett in the new edition, is straightforward in the language used but also gives a sense of the vastness of the setting, the historical perspective of the roles which must be assumed according to one's station and the value of horses in the culture of these people. Readers will never doubt the affection between the young man and his horse nor the pride of his neighbors at having such an animal in their midst.  It is in the careful word selection where the intensity of the story shines.

Suekichi Akaba is one of only two Japanese artists to ever win the international Hans Christian Andersen Award for Illustration-1980.  His paintings done in subdued earthy tones are stunning in their portrayal of the land and people.  Varied backgrounds and the panoramic two-page spreads accentuate the flow of the tale. 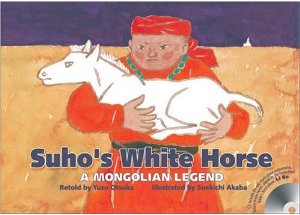 Suho's White Horse:  A Mongolian Legend includes a CD of musical selections played on the horse-head fiddle.  It's uncanny how like a horse the sounds are.  The entire story is read at the beginning and end of the CD.  In between individual pages are read so a listener can follow at their own pace.

I was thrilled when I discovered the publication of this new edition and even happier when it arrived on my doorstep earlier this week.  It is a reminder of a journey began; the representation of how listening to the telling or reading of a story is essential to building reading and writing skills in our students.  It is in the reading aloud to our students, telling them a story or teaching them to read aloud or tell a story, where the structure of story is learned.  But even more important, it is where the love of story is born, where the need within all of us is filled.

I highly recommend this volume for a unit on folktales, a study of Mongolia, an examination of music within given cultures or pure enjoyment for older elementary readers on up.  Suho's White Horse:  A Mongolian Legend beautifully retold by Yuzo Otsuka and illustrated by Suekichi Akaba is why every time I go into a new library, I usually end up in the 398.2 section seeking out new tales to tell.  Read...pass it on.


Three titles which Sheila Dailey (Carroll) has authored that I personally own are:
Putting the World in a Nutshell:  The Art of the Formula Tale, Tales As Tools: The Power of Story in the Classroom and Storytelling:  A Creative Teaching Strategy.  You will probably have to obtain them via inter-library loan as they are out of print.  Students need to hear the excitement in our voices when we talk about books and reading, when we read aloud to them.  It's how we make the reading community grow.
Posted by Xena's Mom at 7:51 AM