For several months now I have had two extremely large cardboard boxes stored in my garage.  I know before the winter wood delivery, I should cut them up and take them to the recycling center.  But there's something about those boxes that prevents me from doing so. 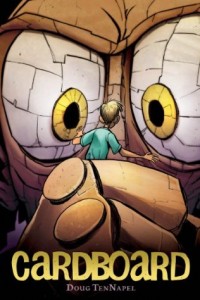 I have strong memories of childhood creations fashioned from boxes.  When I look at those in my garage I see hidden potential, endless possibilities.  Ghostopolis (2010) and Bad Island (2011), two of numerous graphic novels by Doug TenNapel have garnered several honors.  It was with expectant glee when his newest title, Cardboard, also published by Scholastic Graphix, arrived on my doorstep less than two days ago.  Having read all three I can say, without reservation, Cardboard is another rousing representation of TenNapel's outstanding talent as a storyteller and graphic artist.

With no prospects for work in sight, Mike, a carpenter is on his way home, wondering what he can possibly afford for his son, Cam's birthday.  A small roadside stand with a vocal, unusual vendor grabs his attention. The stranger produces

the best, most amazing, and utterly stupendous gift in the history of the universe.

This gift which can only be given to a really good kid, (Mike assures him his son is the best of the best.), is a cardboard box.  The cost of the box happens to equal the only change Mike has left in his pocket.  The wily old man warns Mike to be sure to obey the two rules attached to the purchase of the box.

True to Mike's assessment of his son, Cam is not disappointed with his present.  Father and son spend the rest of the evening building a boxer, a man, from the cardboard.  Imagine their surprise, when awakened in the middle of the night, to find that the man, they name Bill, has come to life.

Marcus, the neighborhood bully, and his sidekick, Pink Eye, are quick to notice the addition to Cam's household.  No amount of money, of which Marcus has a handy supply, can convince Cam to part with Bill. Having neglected to comply with the two rules, a near deadly attack at the hands of the malicious duo, causes the inventive Mike to save the day but open the way for disaster.

What was already a fast paced tale shifts into high as the thieving Marcus's wicked plan for world cardboard domination spins completely out of control.  Monstrous mayhem ensues as each moment could mean the difference between life or death for all the characters.  Readers will not be able to turn the pages fast enough to discover how the individual plot lines converge to produce a satisfying, and in one instance a wholly unexpected, conclusion.

With clever, laugh-out-loud humorous, snappy dialogue Doug TenNapel spins a story of characters caught in the ups-and-downs of life, real and fantastical.  Built into the non-stop action are the honest, open discussions of the son and father at the loss of their mother and wife.  A romantic spark is added by the sincere attentions of the neighbor woman, Tina.  Questions about the emotional makeup of bullies or what it means to be fully human are addressed with thoughtful insight.

Here is a single passage.

Bill:  Good morning, Mr. Mike.  How's the jaw? (Bill is sitting at the kitchen table when Mike walks in.)
Mike:  It's fine, thanks.
Mike: You're reading books now?
Bill: Yeah.
Bill:  Cam is teaching me about all the great books of Western civilization. (He's holding a book titled The Wrath of Khan.)
Mike:  I see.

Preferring to work in the more traditional ink and brush, Doug TenNapel has nevertheless shown his mastery at designing graphics digitally.  Varied panel sizes on each page mirror and extend the narrative giving it a pulse that slows or speeds accordingly.  Sound effects are boldly splashed across the page adding to the emotionally impact.

Time stood still as I entered the world of Cardboard, completely captivated by the characters' lives, the rip-roaring action, the heartfelt pauses and the expressive, impressive illustrations.  Doug TenNapel gives his audience a story to be enjoyed again and again, noticing more detail and subtleties at each reading.  Multiple copies will be necessary.
Posted by Xena's Mom at 12:05 AM