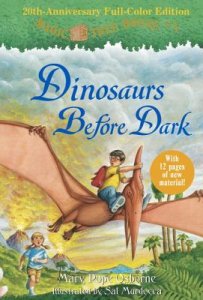 On September 25, 2012 a 20th anniversary full color edition of Magic Tree House #1, Dinosaurs Before Dark, will be released.  It's hard to believe this book was first placed on shelves in July of 1992.  To date forty-eight fiction books are part of the series.  Twelve years ago a companion series, Magic Tree House Fact Tracker, began, extending the fictional adventures of Jack and Annie with current up-to-date information about a topic covered in the fiction books.  Twenty-six nonfiction books are part of that series at this time. 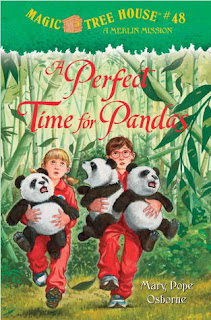 Last week the forty-eighth book in the Magic Tree House series, A Perfect Time for Pandas (Random House), written by Mary Pope Osborne with illustrations by Sal Murdocca had its book birthday. At the same time the Magic Tree House Fact Tracker, Pandas and other Endangered Species (Random House) written by Mary Pope Osborne and Natalie Pope Boyce with illustrations by Sal Murdocca could be found on shelves.  Readers will be glad to know the escapades of the brother and sister are as action packed as ever. 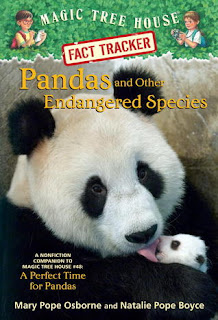 Followers of the series have come to expect the siblings to make their way to the tree house in the woods of Frog Creek, Pennsylvania.  In this title, Jack and Annie are in search of the fourth and final item needed to help friends, Teddy and Kathleen (living in Camelot) fashion a spell, bringing Merlin's beloved penguin back to life.  A clue has been left in the tree house directing them to their next destination, China, along with a potion to increase one's size five times for one hour.

A healthy food, grainy and good,
baked with love, tough as wood,
round in shape, the color of sand,
given to those who have lost their land.

So with a spin, faster and faster, followed by the stillest stillness, the siblings find themselves in Wolong Town on May 12, 2008.  When reading the guide book, Annie is thrilled to hear Jack say this area contains the Wolong National Nature Reserve, home to giant pandas.  For her its a dream come true, for Jack its a distraction from their mission.

Against his better instincts, Jack agrees to rent bikes and ride up the mountain to the Conservation and Research Center for the Giant Panda.  Despite the fact they need to fabricate a story to get in, their day is filled with the memorable meeting of an eight- year-old adult panda and a crew of baby pandas at play.  What Jack and Annie can not know is this day of discovery and delight is about to take a turn into terror.

On May 12, 2008 a 7.9 magnitude earthquake hit the region and our duo is on their way down the mountainside when it strikes.  Trapped halfway between Wolong Town and the Research Center they are torn as to their course of action.  But clearly a decision needs to be made as rocks the size of cars continue to fall and mudslides are a distinct problem as the rains begin.

Jack and Annie have learned from past experiences that mission impossible becomes probable when placing others first.  Edge-of-your seat suspense fills the pages as their survival, other characters, the pandas...and a very special penguin are in question.  Will the time travelers prevail?

Through the adventures of Jack and Annie, Mary Pope Osborne takes readers to places and times for which they may or may not be familiar.  Perhaps, as in the case of this title, they may have remembered a small bit of history or news but when they step inside the tree house with the time-traveling brother and sister, it becomes more personal, as if they are there too, living their experiences.  The dialogue between Jack and Annie, even when they're not in agreement, exemplifies brainstorming, compromise and a form of team spirit.

Osborne welcomes readers to this adventure with Jack and Annie through pacing and detail.  But she also stimulates thinking by adding information about the setting, the events and the outcomes; even an ancient legend.  Here are a couple of passages from this title.

"Okay, okay. But we have to stick to our mission," Jack said.
"We have lots of time to find that special food," said Annie. "Wolong has other restaurants.  It can't be that hard to find a weird food.  Hey! I have a good idea!" She gave the guide book back to Jack, then started off. "Come with me!"
"Wait, stop Where are we going?" Jack said.
"We passed a bicycle shop earlier," Annie called over her shoulder.  "I'll bet they rent bikes!"
"What? Are you crazy?" Jack put their book away and walked after her. "Where is this panda center"? he called.

Jack felt as if he were falling through time.  For a moment, the panda wasn't eight years old.  She was three million years old.  She was filled with wisdom.  She knew things he could never understand.  He didn't know what to write---words couldn't possibly capture the wonder of her.

The Magic Tree House Fact Tracker Pandas and Other Endangered Species is absolutely loaded with information beginning with an overview of pandas as well as other species that are endangered.  The causes of threats to species are carefully outlined in a conversational tone using appropriate vocabulary for the intended audience.  Along the sides of the paragraphs are portraits of Jack and Annie offering up little tidbits of facts.

In the following two chapters more in depth coverage is supplied about the giant panda.  Chapter four focuses on other specific creatures in trouble.  This is followed by highlighting the careers of Jane Goodall and George Schaller.  The book concludes with a thorough list of sources to use in further research including an index to the book.

A series will not endure unless readers can identify with and enjoy the life of the characters.  A Perfect Time for Pandas, written by Mary Pope Osborne with illustrations by Sal Murdocca (I believe he has illustrated every one.), is a stellar example of what makes a series lasting to a legion of readers over decades.  The additional title Pandas and Other Endangered Species, written by Mary Pope Osborne with her sister, Natalie Pope Boyce illustrated by Sal Murdocca, is a worthy companion and then some.  I truly enjoyed reading both of these; captivated by the insights gained from following Jack's  and Annie's latest blast to the past and from the wealth of pertinent facts in the other title.

Don't forget to visit the Magic Tree House website linked above.  You could lose track of time when visiting.

Here are some links to good panda websites, a couple recommended by the nonfiction title.
San Diego Zoo


I know I have posted this previously in a Twitterville update but here is Mary Pope Osborne speaking about the 20th anniversary of this outstanding series.