Earth's Heart Beats In Her Trees

Fortunate are those of us who, if they so choose, can walk among the trees.  When I walk along the Lake Michigan shoreline skirted by trees or up the winding paths among the hills densely forested, all sights and sounds of the busy world are gone.  It's as if time holds its breath; the trees watch in silence lending me their knowledge of decades past and the peace of endurance.

From 2004 through 2006 The United States Poet Laureate Consultant in Poetry to the Library of Congress was Ted Kooser.  Mr. Kooser, the recipient of numerous awards, was given the Pulitzer Prize in 2005 for his title, Delight and Shadows (Cooper Canyon Press, 2004).  One would not be amiss in speaking his name closely followed by the words national treasure. 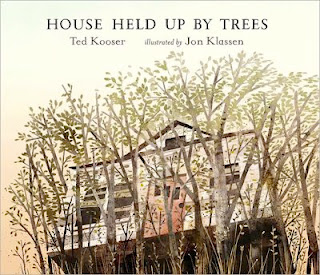 Early this spring Candlewick Press released a picture book written by Ted Kooser illustrated with the signature artwork of Jon Klassen.  House Held Up By Trees chronicles the lives of a family, their home and the nearby woods.  Two worlds, the one formed by the hand of man, the other by nature, exist side by side.

When it was new, the house stood alone on a bare square of earth.  There was a newly planted lawn around it, but not a single tree to give shade in summer or to rattle its bare twigs in the winter cold.

Like so many tracts of land, this had been cleared of trees to make way for a different kind of life.  The dwelling was home to a man, his son and daughter.  On either side of their lot the woods, abundant with growth in all stages and populated with animals was a realm of discovery and delight for the two children.

As the years passed the ever vigilant father would make sure his lawn was picture perfect, careful to not allow the growth of any tree seeds carried there by the winds.  The boy and girl grew into a young man and woman leaving their elder father to pursue their own lives.  In time he came to the realization that living alone and caring for the home and its picture perfect lawn was more than he cared to do.

Without his persistent plucking, tufts of grass grew around the For Sale sign stationed along the road, seeds landed and sprouted into tiny trees.  With no one willing to purchase the home, it fell into disrepair as years passed.  Saplings had found fertile ground along the sides of the house growing larger with every spin of the earth.

Soon what man had made began to crumble but not fall; the arms formed by nature holding it upright.  The house held in the leafy embrace was no longer bound to its cement roots.  As the trees grew stretching skyward, the house with the bare square of earth, the home of the father, his son and daughter, rose into the air.

Through his choice of words, an economy of language, Ted Kooser brings to this story of trees, a house, a man, a boy and a girl, the same sense of quiet one feels when walking through a forest.  As the narrative unfolds, through his more detailed descriptions of the woods surrounding the home, Kooser fills readers with a sense of anticipation, a quiet waiting.  His honest look at the passage of time is not without a tinge of sadness as the people age and the home decays but the continued cycle of flowers, seeds and trees is as uplifting as his conclusion.

Illustrations formed digitally and in gouache beautifully capture the soul of the story.  The cover, a variation in color and focus of one of the final two-page spreads, is like a question needing to be answered.  Endpapers in pale, cool green show small winged seeds floating along on an imagined wind.

Muted greens, browns, spots of rusty red or a sky awash in tints of the palest blue or sunset rose are Jon Klassen's choices for this story.  Details create a feeling of nostalgia and loneliness; the house's front door windows, the push lawn mower, a glimpse of the table inside a window set for one or the man seated alone outside watching the sun on the horizon.  All the visuals are two-page spreads with added interest in the angle or perspective.  Most of the time the reader is an observer but at other times its as if the floating seeds are watching the activities around the home below.

House Held Up By Trees (Candlewick Press) written in prose that reads like poetry by Ted Kooser with illustrations by Jon Klassen is a gentle journey into the measurement of time through the ticking clock of nature; absolutely perfect in every way.

I believe this book would make for meaningful discussions.  Why was the man always maintaining his lawn instead of exploring with his children? Where is the children's mother?  How do readers feel about the choice of the man to build his home there?  I really like a book, such as this title, that makes me think beyond the story.  Why is it that illustrator Jon Klassen chose certain details for his pictures?
Posted by Xena's Mom at 3:12 AM