The Force Is Still With Us-Stronger Than Ever

There are two, of many, things that have stood the test of time: Star Wars and the Japanese art of paper folding, origami.  The first's popularity has never diminished in thirty-five years and the love of shaping the latter has continued for centuries.  What these two cultural icons of human history have in common is the widely and wildly popular middle grade book series created by the mind of Tom Angleberger; an energetic, innovative look at a group of middle school students. 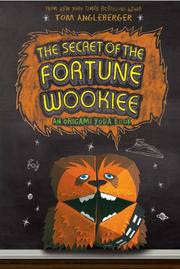 Now a little more than two years after the publication of the first book, The Strange Case of Origami Yoda in March of 2010, followed by Darth Paper Strikes Back in August of 2011, the third volume, The Secret of the Fortune Wookiee (Amulet Books), amid much anticipation, was released this month. Consumed in a single sitting (I could not stop reading.), this book makes one of my Dad's favorite sayings, "Anticipation is greater than realization" not ring true in any way, shape or form.  The Secret of the Fortune Wookiee far exceeds what I might have imagined it to be.

Even if readers have not read the previous two books in the series, the first four pages offer an explanation of events up to this point in an upbeat, conversational tone.

Every case file begins with a question....
The first time it was "Is Origami Yoda real?"
Then "Will Darth Paper destroy Origami Yoda?"
It looked like THIS case file was going to start-and end-with the question:
How can you have a case file without Dwight?

The entire cast of characters at McQuarrie Middle School has returned minus Dwight.  Dwight, the guy with the origami Yoda finger puppet, eccentric but seeming to get to the heart of any situation through the voice of Yoda, is attending Tippett Academy having been suspended from McQuarrie until January.  On the second day sans Dwight, the crew has gathered in the library, before morning classes, contemplating their boredom when Sara, a neighbor of Dwight's and Tommy's crush, strolls in with big news.  That morning Dwight tossed a plastic baggie out his bedroom window containing another finger puppet--a Wookiee, Fortune Wookiee, a cootie catcher like none other.

This newest member of the paper Star Wars menagerie is to only be used for emergencies per Dwight's instructions to Sara.  Plus without the intercession of the school librarian, Mrs. Calhoun, Principal Rabbski nearly had Fortune Wookiee banned.  It gets even better when Sara reveals Han Foldo, another puppet who will interpret Chewbacca's unique language.

What follows is a book jam-packed with episodes as one student after another presents Sara with problems needing answers that typically might plague students; a boy worried a secret will be revealed, a sixth grade girl who has a crush on a boy who doesn't even know she exists, or a boy terrified of eating his grandmother's traditional Thanksgiving culinary speciality.  As in the previous two titles each chapter is written in the voice of a specific character with comments by Tommy and Harvey at the end.  Interspersed among these are chapters about worrisome changes in Dwight.

Something not quite right is in the air at McQuarrie Middle School.  The mystery of Dwight's apparent new normalcy is not the only "game afoot".  In an ending where characters readers have come to know and yes, love, the Force is strong...and as we know, Yoda is never wrong.

Tom Angleberger is one of those authors who nails life and the special lingo in a middle school setting with perfection.  The dialogue could not be better, capturing the sense of urgency and importance of these situations and events to the students involved.  The play on words, the references to Star Wars, enhances his "Super" command of pacing, plot and language.

"I can see you haven't learned one thing about not acting like animals since you were in my class! That was a new level of embarrassment! What on earth were you hardheads doing, anyway?"
"Tommy just blew his nose on my snowtrooper!"
"Correction," whispered Kellen. "Snot trooper."
"SHUT UP," I hissed.  If Kellen made me laugh, Howell would explode all over again.   ...

(As an aside here I need to also point out the versatility of Angleberger as a writer.  I have read his other books outside this series, Fake Mustache and Horton Halfpott: Or, The Fiendish Mystery of Smugwick Manor; or, The Loosening of M'Lady Luggertuck's Corset.  His ability at descriptions, creating a sense of place and time and again, the dialogue between the characters, shifts splendidly between the types of story as it should with all well written books.)

The cover and front matter art for The Secret of Fortune Wookiee was done by Jason Rosenstock, Cece Bell (Angleberger's wife, also an author and illustrator) and Tom Angleberger.  Throughout the remainder of the book all the small sketches in the borders of the pages as well as the larger pictures were done by Angleberger adding to the feel of this being a true "case file" crafted by middle school students.  The acknowledgments at the book's end are well worth reading.

Fans of the earlier Origami Yoda volumes will read The Secret of Fortune Wookiee by Tom Angleberger eagerly and repeatedly but so will anyone wanting to read a great story with unforgettable characters.  Will there be another in the series?  You'll have to listen to Yoda.

Follow the link to Tom Angleberger's name above to enjoy all the excellent pluses of his website.  Follow this link to an interview given at The Seattle Times by Angleberger.