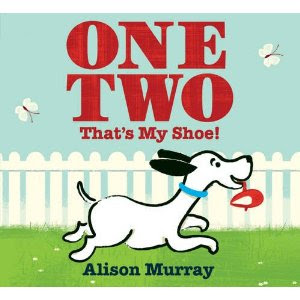 I love it when my mind's eye sees something while my conscience eyes are focused on something else entirely.  While looking ahead at a special section in the public library this past week, what should register on my radar but the new Alison Murray book, One Two That's My Shoe!(Disney-Hyperion Books, June 5, 2012)  I was as pleased as could be to see the rascally familiar black and white pooch on the cover in all his lovable glory.

As in the first book, Apple Pie ABC, Georgie and his human, Grace, are characters in the retelling of an old nursery rhyme.  Alison Murray's version of "One, Two, Buckle My Shoe" is a series of classic "catch-me-if-you-can" snapshots.  This youthful chant has never been better than when altered by the clever words and artwork of Murray.

Grace is all comfy in the big red chair reading with Georgie comfortably resting, his head on her lap.  When she leaves the room, Georgie follows.  Spying her pair of red shoes unattended on the floor, keeping his eyes on Grace, Georgie picks one up, running away.  One and two have been counted.

Once three and four have been noted Georgie has left the house.  Leading his girl on a merry path through a group of butterflies, into the tulips, through the trees, past laundry on a line and into chicks with hens, the dog on the run is clearly having great fun as the counting is done.  Finding himself in a bit of trouble, Georgie is grateful for Grace's intervention; giving her the most favored show of affection, a doggy kiss.

As in Apple Pie ABC the front cover foreshadows the storyline Murray will chose to follow but the back cover, rather than a continuation of the front, again gives readers a hint about the book's conclusion.  The endpapers, front and back, feature large blocks framing elements from Georgie's romp with Grace in the upper left-hand corner pursuing the wayward dog as he scurries off the page in the lower right-hand corner.  In this volume red is still prevalent but in use as more of an accent color.

Alison Murray has chosen to vary her palette from the warmer shades of red, orange and yellow with spots of blue found in Apple Pie ABC to the cooler hues of greens and blues with more white space; numbers are in white within squares of blue.  Beneath each number in a paler, dusty turquoise are small representations of the objects used in the counting; three teddy bears, five butterflies, seven trees.  The two page spread including the verso and title page actually begin the story.

With the exception of four pages all the visuals are two page spreads; indicating the chase is on.  Despite Georgie's escape with Grace's shoe, Murray has made it clear with the lift of an eyebrow, the curve of a mouth and open-eyed looks, this game may have been played and even enjoyed before...well, at least on Georgie's part.  Combining digital drawings with textures created using other mediums, works in these illustrations to give readers a sense of lightness, playfulness and inviting openness.

One Two That's My Shoe! is not only a rousing variation of an old favorite but the illustrations by Alison Murray are so charming readers will be leaning in as the pages are turned.  Join in the counting waggery with this delightful duo.  This title begs to be used in creative drama.