When beginning a new book, there's something particularly attractive about being introduced to a character, within the first two pages (a prologue), who among other things, is a teller of tales.  When the story they tell is so compelling a listener becomes fearful, readers, like that listener, might be prone to the same thoughts as one of the main characters.

And that, as is said, is the crux of the matter.

For a book to be good, so good the characters, events, setting, and how they are shaped and pieced together into a powerful whole stays with a reader, the whole must bring you into the story.  An author who has consistently perfected this art is Sharon Creech.  Creech was the recipient of the Newbery Award in 1995 for Walk Two Moons, the Newbery Honor in 2001 for The Wanderer and the 2002 Carnegie Medal for Ruby Holler. 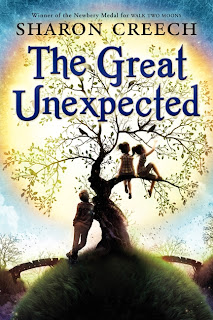 I was fortunate enough to receive an ARC of The Great Unexpected which is scheduled to be released on September 4, 2012.  With every turn of page you fall more deeply under the spell of Creech's writing.  Before you know it, you are living with the people making their home in a town named Blackbird Tree.

When she was only three Naomi Deane, a foster child, began living with Joe and Nula; her father having died trying to save her from a vicious dog attack.  A mere two days after she was born her mother had died.  Naomi's best friend, Lizzie Scatterding, has been living with the Cupwrights as a foster child for the past two years.

All is oddly normal in their community; the gossipy gatherings at Tebop's General Store, the Dimmenses and the dogs on Black Dog Night Hill, Witch Wiggins who may or may not have out-of-this-world powers, Crazy Cora who abhors visitors of any kind, Mrs. Mudkin from the Ladies Society at church spreading goodwill, Mr. Canner living on memories and one-armed Mr. Farley lost in the past.  All this sense of sameness changes when a body falls out of a tree on top of Naomi and the Dingle Dangle man comes to this particular spot in the universe.  Yes, indeed, things are not at all what they appear to be.

On the other side of the ocean two women, Mrs. Kavanagh and Miss Pilpenny are plotting a revenge and enjoying a healthy dose of murder each night.  The long arm of these two will be felt in a great unexpected way.  How fairy circles, rooks in twos, a love of dogs, ghosts, and a crooked bridge all meld with these delightfully, distinctive people toward the miraculous, marvelous conclusion will have you wondering if you should clap your hands and dance, sigh and quietly smile or as a single tear rolls down your cheek you should begin to read it all over again.

As I was reading The Great Unexpected I continually held this picture in my mind of Sharon Creech sitting at a table with pieces of a puzzle spread before her.  All these pieces were her creation; phrases that roll off your tongue, lines of language bringing forth an instant sense of place or detailed dialogue or thoughts giving insight into the core of a character's personality.  She with the practiced hand of a master having honed her gift moving them, fitting all the pieces into place.  And we, lucky readers every one, getting to enjoy and savor the beauty of this book.

Here are some samples of her writing from this title.

Joe, my guardian and a man of few words, once said about Lizzie, "That girl could talk the ears off a cornfield."

A tangle of twine on Joe's workbench reminded me of a time when I was maybe five or six and had taken a ball of twine and wound it all through the chicken yard, so the chickens would have little "rooms" of their own, and Nula came out in the near dark and tripped over the twine rooms and broke her wrist when she fell.
She didn't yell.  She didn't scold. All she said to me was, "Rooms for chickens?"

Both Nula and I were stunned into silence.
"I just cannot believe this, Naomi.  It's like--it's like--the universe spun us together on purpose."
"Yes," Nula said quietly, "It does seem that way, doesn't it?"

Thank you Sharon Creech for this book.  This view from the moon is splendid. Lar-de-dar

Links embedded in her name will take you to her website and blog.
Posted by Xena's Mom at 12:12 AM