Getting children to eat their vegetables is an age-old frustration felt by mothers on a universal level.  It has been the source of countless jokes, cartoons and picture books.  The ingenuity of mothers to get their children to eat peas in particular is only equaled by their sons and daughters schemes to avoid them at all costs.

Given their less than desirable lure at the dinner table, it was pure pleasure to see them in LMNO Peas (Birch Lane Books, 2010) written and illustrated by Keith Baker.   This happy-go-lucky, unique alphabet book uses peas as people rhyming their way through the ABCs highlighting various occupations, recreational pastimes and everyday living.

We're acrobats, artists, and astronauts in space.
We're builders, bathers, and bikers in a race. 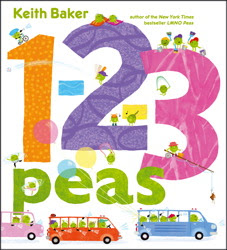 As the numbers one through ten are counted, each is accompanied by a rhyme with the pea(s) engaged in an activity followed by the repetition of a single word mirroring their actions.

Verbs describe the peas in boats, a garden patch, an airplane, a swimming pool, or on a track, stage or scaffold.  When the reader arrives at eleven the numbers are mentioned up to nineteen with a single sentence tying them together.  From twenty to one hundred the numbers are counted by tens continuing with poetic rhythms as the robust, round, green guys and gals form, move, snooze, piece, gaze, group, giggle, and drift toward their goal.

Propelling this counting chant through the pages are the digitally rendered effervescent illustrations of Baker.  His book jacket, spreading across the back and front gathers the peas together, each moving to the beat.  Endpapers are green on green, a series of dots resembling the spirited spheres.

All the visuals are blended together across two pages regardless of whether they're devoted to a single number or two.  The colorful, textures on each gives one the sense of having gathered together fabric pieces to make a animated whole.  What really pulls the reader into the pages are the peas.

Using the tiniest of details, infused with subtle humor, it takes no stretch of the imagination to picture a world peopled with peas running parallel to our own.  For example, when the number seventy takes a turn with

instead of having them simply in separate groups around the gigantic 70, Baker creates an entire scene. The seven is rooted in the ground with king-size flowers growing upward, as a large line of notes weaves through the two numerals.   Strategically placed are groups of peas representing singing in its varied forms (opera, in the shower, barbershop quartet, etc) giving puny nods to well-known musical figures.  Whatever these peas pursue it is done so with panache.

One cannot help but smile when looking at the cover of 1-2-3 Peas; a smile guaranteed to last well after the last page is turned.  Never has a counting book been quite as much fun as when written and illustrated by Keith Baker with the assistance of his personable peas.  Clever readers will be searching the pages for the consistent appearance of a special visitor.

I highly recommend this title for one-on-one sharing or with a group.  Every reading will bring new discoveries.  I'm having a hard time not seeing a passel of hand-crafted peas being passed around or held by students during the storytime.