Guard Your Chocolate! She's Back!

You have nannies who fly in with the East Wind holding an umbrella,  ask you to list your favorite things, live in the Plaza Hotel with Eloise or have a magical walking stick and warts that vanish when a lesson is learned.  But there is one particular nanny in a class all by herself; first because she's a pig and second because nothing she does is anything short of audacious with a capital "A".  Readers were first introduced to this particular, prominent porcine in The Adventures of Nanny Piggins written by R. A. Spratt, illustrated by Dan Santat. 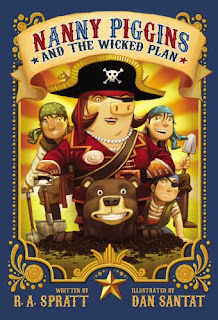 We can all join in the the joy experienced daily by the Green children, Derrick, Samantha, and Michael, in welcoming her back in Nanny Piggins and The Wicked Plan (Little, Brown and Company) written by R. A. Spratt with illustrations by Dan Santat, released less than a month ago.  Mr. Green is still his heartless, slightly insane self, but now instead of hoping for a human nanny, he has decided he will find a wife.  Boris, the ten-foot-tall, ballet-dancing bear from Nanny Piggins's circus, her brother (don't ask, just read) is now an integral part of events; still remaining undiscovered by the distant elder Green.


In twelve action-packed, never-a-dull-moment chapters, Nanny Piggins attempts and succeeds in one harebrained scheme after another.  Because, it goes without saying, Nanny Piggins always has a plan, even if formulating one as she goes along.  It begins with the Green children, Boris and Nanny Piggins actually babysitting an infant girl belonging to Mrs. Pettigrain, one of Mr. Green's prospects for wifedom.  Imagine when the porker's plan for play involving a television commercial works out for everyone but Mr. Green. (tee-hee)

Pretending to be pirates, ends up not digging a hole to China but involving a prison break and sticky buns. Whether Dead Man's Gorge is lined up with cannons (one stolen), an old family cookie recipe theft is resolved, personal ads go haywire, the medicinal uses of cake are punctuating a point or sniffing out a fortune for Chef Pierre, these characters are living lively lives.  Of course, Nanny Piggins delivers her own brand of justice when she is summoned to jury duty.

Her old nemesis, Nanny Anne, is back on the scene, arrogant as ever; rest assured the international Westminster Nanny Show is never going to be quite the same. When a gypsy queen sets her sights on Mr. Green, the riotous rescue pulls out all the stops.  Nancy Piggins is quite the persistent pig; always getting her cake (preferably chocolate) and eating it too, even if she bakes it herself.

R. A. Spratt, has perfected her personalities in this sequel to the first title with hoot-hollering dialogue and delectable descriptions. Her two page, Previously On Nanny Piggins..., is a genuine segue into this title, a title replete with small type asides sprinkled throughout adding to what I call the laughter factor.  While Nanny Piggins may have an unorthodox method of nannying, she does pass on true wisdom on occasion.

Here are a couple of passages to showcase the writing of R. A. Pratt. (I really wanted to show you more but hope these will entice you to get a copy of the book ASAP.)

Simply put, when Nanny Piggins blasted out of the cannon, the children had no idea where she went.  All they saw was a streak of pink pig flying across the sky at the speed of light.  She passed over Dead Man's Gorge and kept flying until she was a tiny pink dot disappearing over the horizon.
"Uh-oh!" said Derrick.
"Oh no!" said Samantha.
"Cool!" said Michael.
Boris did not say anything because he was too busy whimpering with his paws over his eyes.

But it was not just Nanny Piggins's appearance that won him over.  He also fell in love with her educational theories.  He approved of her decision to take all the school's required English texts and run them through a wood chipper.  Both because the pages provided excellent mulch for the school gardens and because she allowed the children to read books they might actually enjoy, having formed the radical theory that if children were allowed to enjoy reading, they were likely to read more.

What truly takes this title to the top are the illustrations by Dan Santat.  His full-color cover reaches out and grabs you.  Distinctive black and white graphics inside are tingling with emotion and humor.

Each chapter beginning features one of his spot illustrations foreshadowing events.  Within each chapter is a full page illustration framed by straight lines and embellished corners.  It's a good thing I was not snacking or sipping a drink when the picture of Nanny Piggins with bananas stuffed up her snout, blasting across the gorge or Boris trying to hide under a rug, a third of his size, came into view.


I can say in all honesty I laughed aloud more times than I can remember reading this title. The side of my copy, filled with small sticky notes, looks much like a porcupine with quills spread.  I highly recommend Nanny Piggins and the Wicked Plan by R. A. Spratt with illustrations by Dan Santat for an individual read or as a read aloud.  You might want to play the sound track from The Pirates of the Caribbean as an announcement to a read aloud each time before you begin; the episodes are that good.

Oh, and be sure to visit R. A. Spratt's website for more information about Nanny Piggins.  It looks like there are more books in her future. Dan Santat's website is linked above, too.  He is the creator of the book trailer below.