It's A Bear-y Good Thing

This year I have been spending time (less lately than I should) participating in a Caldecott Challenge hosted by LibLaura5, librarian and blogger along with her friend and fellow librarian, Anna, found at A to Z Library.  In the course of participating in the challenge I have had the benefit of revisiting many old favorites.  One such title, a Caldecott Honor winner for 1949, is Blueberries for Sal (The Viking Press) written and illustrated by Robert McCloskey. 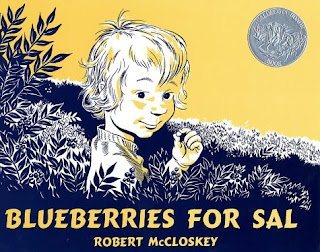 I enjoyed reading it again so much I knew I needed a copy for my personal shelves. Even now, gazing at the pages, the warmth of the story and illustrations is there as much as it was all those years ago.  Anita Silvey, author, blogger and lifelong lover of books for children of all ages, best describes it in a post on her blog, Anita Silvey's Children's Book-A-Day Almanac.

Then on March 11, 2012 and on August 2, 2012 Julie Danielson, blogger at the informative and downright gorgeous, Seven Impossible Things Before Breakfast highlighted the new title of author/illustrator Ashley Wolff, Baby Bear Sees Blue (Beach Lane Books, February 7, 2012), along with an interview and a selection of some of her other books.  It seems Wolff was drawn to the relationship of the mother bear and her cub in Blueberries for Sal.  After spending a day with Baby Bear and his Mama readers will sense the same warmth (and more) found in McCloskey's book, in this title by Ashley Wolff. 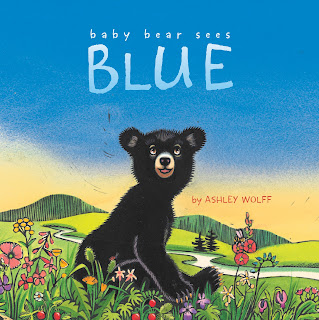 Deep down in the den,
Baby Bear wakes up.
He yawns and blinks
and stretches his stubby legs.

As a glow fills the cave's opening, the curious little bear asks his mother who is warming him.  Her reply is the sun.  What he sees is yellow.

As he ventures out into the day, once again, his curiosity is piqued.  In noticing the leaves he wonders who is waving at him.  She names it as the oak.  Green is what Baby Bear sees.

With each "who" question Baby Bear asks, his ever present Mama answers with an exact answer.  He in turn visualizes the object as a color.  In this manner readers follow the two on their day's journey, crossing a stream, wandering through a meadow, back to the safety of their den when a storm threatens and into the comfort of sleep.

Ashley Wolff's narrative, her word selection, has a natural, pleasing and inviting rhythm to it.  When Baby Bear perceives with his senses, at times in the form of personification, an object, his Mama's response is to instruct and introduce him to his world.  When he follows with the name of a color, the trio readers have come to expect is complete.

Wolff's artwork is breathtaking; illustrations have been rendered by printing linoleum blocks in black on Arches Cover paper followed by, what can only be described as meticulous, hand coloring with watercolor.  Every single two-page spread entices and rewards the reader's eyes.  Color choices radiate, even in the rain

At repeated readings, once will not be enough, all the extra details can be savored; facial expressions on the bear pair, the squawking jays, or the splashing trout.  Smaller woodland and meadow creatures, plant life too,  make their way into the illustrations giving depth to the bears's world.  There is joy, an exuberance, that reaches out from the pictures and wraps around you.

Be sure to follow the links to both of the interviews at Seven Impossible Things Before Breakfast to feast your eyes on pictures from the book in various stages of completion.  Ashley Wolff's text and illustrations most certainly offer readers a path to the learning of colors and the names of things in Baby Bear's little corner of the forest and field.  But Baby Bear Sees Blue is so much more, a charming, delightful story that will stand the test of time, a thing of beauty.  I am adding it to my Mock Caldecott list for 2013.
Posted by Xena's Mom at 12:13 AM