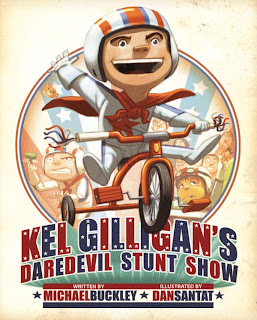 Their capacity knows no heights.  In Kel Gilligan's Daredevil Stunt Show (Abrams Books for Young Readers) written by Michael Buckley with illustrations by Dan Santat, a new talent a la Evil Knievel blasts forth on his mighty tricycle.  No feat is too formidable for this little guy.

I'm Kel Gilligan and I'm a daredevil!  I perform super scary stunts while laughing in the face of danger.  They call me "The Boy Without Fear."

With that said, this champion proceeds to prove to readers exactly how brave he truly is as his family members look on, first in horror, then in disbelief.  Conquering first the alarming test of eating broccoli, he next faces the terror of the potty chair. With those accomplishments under his belt, he proceeds the next day to win the battle of dressing himself, resisting the temptation of needing constant attention, surviving the dreaded bath and the final audacious act of meeting the monsters.

Michael Buckley pens a narrative so snappy the air crackles with the sheer boldness of his character's spunk as he describes his attempts and conquests.  As each exploit is introduced family members, mom and dad, an older brother and sister and grandmother watch from the sidelines, their anxious exclamations posted in speech bubbles.

Is he insane?  Without a net?

What pervades every syllable of this story is the outrageous humor.

The perfect partner for this laugh-out-loud tale of triumph is the master of exaggerated expression, Dan Santat.  His book jacket has separate visuals for front and back showcasing bold red, white and blue Kel Gilligan, man of action, in all his glory, superimposed on excerpted pictures from the book in hues of blue-green.  Beneath the jacket the cover is different; the front proclaiming Viva La Kel with his fierce face peering straight ahead amid a red, white and blue starburst and the back is nearly all creamy white except for a hilarious view of Kel after his tackling the potty chair.

Matching endpapers done in a white and blue tint show family members in various facial forms of fright (except for grandma who's usually clapping) with an enlarged Kel, teeth gritted and fists raised in power.  No detail is overlooked by Santat when is comes to portraying a book about a kid for kids.  On the title page his name and Michael Buckley's are spelled out in wooden blocks beneath a full spread of Kel's handiwork.  Toys about the house, Kel's artwork on the walls and framed photographs are all part of the continuity.

When readers first meet Kel his look, one eye partially closed, the other with raised brow, cowlick in the back, looking straight out the page is downright laughable.  It never stops from then to the end.  Every look, every gesture by him and his family are an invitation to join in the fun.

Kel Gilligan's Daredevil Stunt Show written by Michael Buckley with illustrations by Dan Santat demands to be, has to be read, aloud.  My surefire prediction is once will not be enough.  No, this title will be read again and again and again amid giggles galore.