This will be my first time participating in what is now the third annual August 10 for 10 hosted by Mandy Robek of Enjoy and Embrace Learning and Cathy Mere of Reflect & Refine:  Building a Learning Community.  This is a time for people who love picture books to come together highlighting those books used in a classroom setting previously, those they intend to use this coming year, those with a common theme or those they would have to have with them in case they are stranded on a desert island.  Because my personal collection is extensive and after spending thirty-four years as a school librarian, picking only ten seemed impossible.  But as I tell my students start small and build up.

I love alphabet books and have been collecting them for quite some time.  My list includes ten (plus one)(shoulder shrug) some of which I have used in the classroom for lessons, some because their approach to the alphabet is innovative or clever and all for their illustrations.  I have listed them in order by publication date. 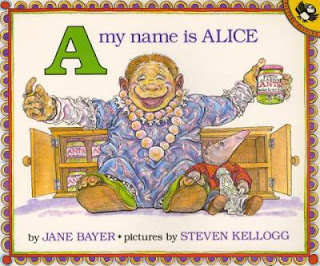 1.  A My Name is Alice (Dial Books for Young Readers, 1984) by Jane Bayer, pictures by Steven Kellogg
Students have loved this book for years and years.  The rhyming and rhythm are contagious.  It invites prediction on every turn of page.  As a follow up activity students work in pairs thinking of a letter, names for the wife and husband beginning with the same letter, a place to live using the chosen letter, what they might sell and an animal for each beginning with the letter.  They can then pick the place where they live or either of the animals to do further research. 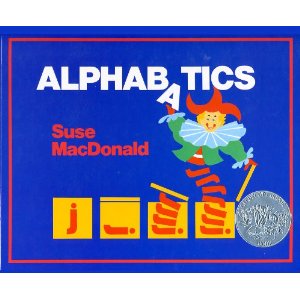 2.  Alphabatics (Simon & Schuster Books for Young Readers, 1986) written and illustrated by Suse Macdonld (Caldecott Honor Book, 1987)
Creativity abounds in this book where gradually a letter changes into a word beginning with the same letter.  Students love to figure out what the letter becomes as well as think up their own. 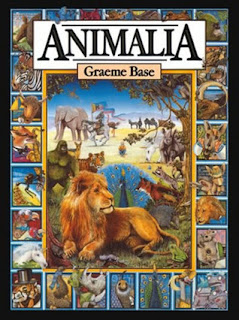 3.  Animalia (Harry N.Abrams, Inc., 1986) written and illustrated by Graeme Base
I will never forget the first time I saw this book.  I spent days looking at the illustrations searching for as many words beginning with each letter of the alphabet not to mention trying to find a small portion of the stripe-shirted boy hidden in each detailed picture (which Base states took more than three years to complete).  This is a wonderful volume to use when teaching alliteration, or extending vocabulary. I believe there are still posters available for each of the letters.  My favorite is, of course, Lazy Lions Lounging in the Local Library.

This is another of those books that invites readers to think outside the box; many times asking them to predict a less than tangible answer.  After a read through a class alphabet book is generated.  Every year I am impressed by the thoughtful pages designed by the students. 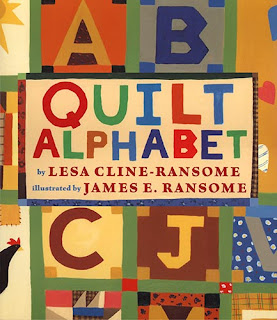 5.  Quilt Alphabet (Holiday House, 2001) by Lesa Cline-Ransome, illustrated by James E. Ransome
This is a collection of poems for each letter of the alphabet.  The poems are riddles which describe something which might be found in a country setting.  My favorite is for the letter "N":

The poems might be difficult for younger children; varying each year with a particular grade level.  This volume could be used for a study of country life, historical fiction, a themed unit on quilts, poetry or an alphabet study.  I use it with younger students having them create a quilt block (graphically) with a letter in the center.  In one corner goes the letter before the center letter and in the opposite corner the letter which follows.  In the alternate corners are pictures of items beginning with the center letter. 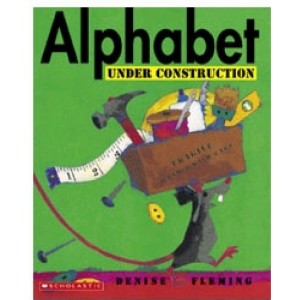 6.  Alphabet Under Construction (Henry Holt and Company, 2002) written and illustrated by Denise Fleming
This is used in conjunction with an author study of Denise Fleming, as a Caldecott Award winning author.  The same mouse appears in another of her titles, Lunch which acquaints readers with colors, fruits and vegetables.

7.  The Hidden Alphabet (Roaring Brook Press, 2003) written and illustrated by Laura Vaccaro Seeger
This book is an example of sheer beauty.  The students love the lift and look idea.

I cannot even begin to imagine the time it took to compile the art for this book.  Every time I look through it, I find something I have never seen before.  Each animal representing a letter of the alphabet is created with a compilation of those letters. Surrounding the animal are visuals of other words beginning with the same letter.  There are flaps to flip and folds to open.  Created on heavy paper it is bookmanship at its best.  (Is bookmanship a word?) If you do an image search in Google or Bing you can see other images found in the book. 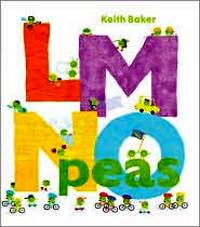 9.  L M N O Peas (Beach Lane Books, 2010) written and illustrated by Keith Baker
We are peas---alphabet peas!
We work and play in the ABCs.
I never would have thought to have peas act out occupations but this book is a boatload of fun.  Try it with a unit on possible careers or things people do outside of their daily work.

10.  Apple Pie ABC (Disney/Hyperion Books, 2011) written and illustrated by Alison Murray
This delectable volume follows a dog and his human during a pie baking adventure.  I reviewed this here.  I really like the idea of taking the letters of the alphabet to create short phrases when combined are a story.

10A.  Z is for Moose written by Kelly Bingham, pictures by Paul O. Zelinsky
I could not make a list without including this book.  Certainly it is one of the best alphabet books of 2012.  My full review is here.

Okay, I am sorry but I was about to close this post out when I remembered another that must, must be included.
The Z Was Zapped written and illustrated by Chris Van Allsburg.  Each year all the grades complete an author study of this phenomenal illustrator.

I will try to follow the rules better next year.