Through The Eyes Of A Child

Information, the right information, can be a powerful thing, now more than ever.  Having worked with students, helping them to access, evaluate, use and present relevant information in an engaging and collaborative manner has proven this to be true again and again. Creating independent learners (and avid readers) has been fun for my students and me. 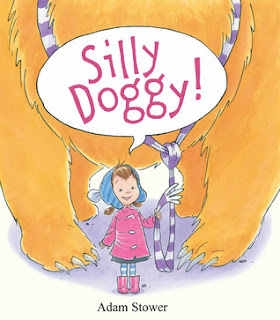 On the flip side of the coin, the final sentence of a poem, Ode on a Distant Prospect of Eton College by Thomas Gray (1742),

No more; ---where ignorance is bliss, 'Tis folly to be wise.,

has likewise proven to be true.  After twenty-one years working with middle and high school students, thirteen plus years at the elementary level has provided for countless memorable moments where innocence ruled the day.  It is because of a portrayal of ignorance and  innocence, I found myself laughing out loud in a bookstore last week reading Silly Doggy! written and illustrated by Adam Stower.


One morning, Lily saw something wonderful in her garden.

Peering out her bedroom window this wonderful something has all the attributes of her heart's desire; it's large, brown, furry, four-legged with a tail and a matching large nose.  That's why after she dons hat, coat, boots and a scarf, running up to this creature, she cries with all the exuberance of youth

As she eyes her new best friend she realizes that up close he is mighty big and kinda' cranky but perhaps, she reasons, he needs her as much as she wants him.

When she shows up with her pal at day's end, her Mom is fairly certain Doggy belongs with someone else.  Lily decides to make a poster enumerating all the qualities of her companion; his physical description, how he fails to eat the dinner set before him, how he likes going to the park as long as he doesn't have to walk, his lack of game-playing skills and obedience, how nice he looks after a bath, his favorite thing and Lily's favorite thing---him, of course.  With the poster posted, Lily hopes, truly hopes, no one will notice it.  But...

It's hard when your heart's desire is gone even though you know they're back at their forever home.  It's going to be a long night.  Wait!  What's that?  It's another morning and a new surprise awaits Lily in the garden; a BIG surprise.


Within the first two pages author Adam Stower has you hooked with his comedic narrative and character responses.  Impeccable pacing, use of the pregnant pause, creates an expectation of wondering how what is said and what actually happens will differ.  His descriptions of Lily's and Doggy's activities on a single day, when you consider Doggy is not really of the canine variety, are hilarious.


It's the artwork which increases the laughter factor to new heights.  This title received a position on the longlist for the Kate Greenaway Medal in 2012 (not published in the United States until April 2012) and the companion title, Naughty Kitty, not yet published here, appears on the longlist for 2013.  Stower begins with front endpapers in shades of blue zooming in on a table set for tea with a portion of a newspaper headline showing.  The text in the paper provides plenty of "punny" clues.

A variety of soft colors used in the illustrations, which look like ink and watercolor, are displayed either across two pages, a single page opposite a white page with minimal text, or as small insets with continual alteration in perspective. While the text says one thing the illustrations paint a whole new contrasting view; Lily says Doggy is silly for not eating his dinner, behind her he is going through the refrigerator eating everything in sight, Doggy doesn't like to walk to the park but he and Lily are shown heads hanging out of a speeding city bus or the text says Doggy is not so hot at playing fetch, Lily is peeking into his open mouth saying, Where did your ball go?  Lily's petite cuteness against the bulk of Doggy, both having a series of expressive facial looks, are guaranteed to garner giggles.  The closing endpapers, again depict a table set for tea with another newspaper showing portions of two separate but pertinent articles.


Sometimes, even before you've finished a book, you know it will be one of those titles that are read repeatedly.  Adam Stower's Silly Doggy! is one of those books.  I have not stopped grinning during the writing of this post and readers won't be able to stop either.  Get ready for gales of laughter during a read aloud.