It's Christmas Eve.  Cinnamon, herbs and evergreen scents perfume the air.  Lights reflect off an ornament-filled tree as carols softly play.  Stockings are hung by the chimney.  Nearby cookies cover a plate next to a glass full of milk, waiting for a nighttime visitor. 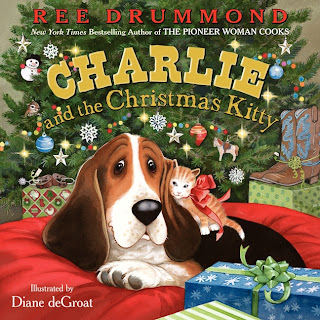 There are not many evenings where anticipation runs higher.  Those special creatures who share our homes sense something out of the ordinary is in the works; knowing exactly what to expect unless this is their first December.  But then again, surprises come in all shapes and sizes as one particular basset hound discovers in Charlie and the Christmas Kitty (Harper) by Ree Drummond with illustrations by Diane deGroat.

The ever-helpful (in his mind) Charlie is back with his energetic friend, Suzie, and his tiny, constant companion, a chipmunk.  More of a supervisor than a worker, the lovable, loyal, laid-back basset basically likes to sleep despite his title of King of the Ranch.  Overseeing the bringing in and decorating of the tree has him all tuckered out.

This new state of affairs has caught Charlie completely off-guard.  There's only one thing to do.  A nap should solve this problem; perhaps it's only a dream.

Well, it's not a dream.  Despite all his attempts to make the best of this situation he is persistently pursued by this feline who clearly wants to be his friend.  Kitty finally hits the right spot, finding what Charlie needs after a hard day's work on the ranch.  Ahhh...What?! Oh, no!


Charlie's first person narrative has a very distinctive voice as a canine member of a ranching family relating the events of a not-so-typical day.  Ree Drummond clearly understands Charlie, presenting his outlook with ample humor.  His thought processes and sleep-oriented solutions will elicit grins and giggles.


Illustrations created using Winsor & Newton watercolor paint over digital art by Diane deGroat capture the spirit of the season and life on the ranch.  The realistic, brightly colored front cover is a definite draw as is the photograph of Ree Drummond holding Charlie on the back with the added detail of the kitty batting the bowed bell attached to the barcode. Rich, red endpapers followed by Charlie clad in a Santa hat beneath the title get readers ready for some Christmas cheer.

Alternating between double page spreads, single pages and insets on a page, combining Charlie's perspective with more panoramic views, readers feel right at home.  All the added details enhance and extend the text; the cattle in the background, one looking right in the window as the tree is decorated, Christmas stockings with Charlie's and Suzie's pictures on them, the chipmunk sleeping with Charlie often under his ear.  The expressions on Charlie's face are portrayed so well even without the text we readers know his mood, his thoughts.


Whether you read the first book, Charlie the Ranch Dog (Harper, 2011) (reviewed here) or not, Charlie and the Christmas Kitty will be a Christmas favorite of dog and cat lovers and fans of The Pioneer Woman.  The combined talents of Ree Drummond and Diane deGroat bring the everyday happenings on a ranch, through Charlie's eyes, to life in a warm and welcoming way for all readers.  On the final page is Charlie's Favorite Christmas Cookies ( for human consumption). According to the publisher's website two more titles are in the works for the summer of 2013.
RRRROOOWW-OOOOOH!

Make sure to follow the embedded links in both Drummond's and deGroat's names to get to their websites.  There is a series of pages devoted to Charlie at The Pioneer Woman.  Here is a link to the Browse Inside feature at Harper to see more of the book.