Jovial Julia--A Jewel In The World of Cooking

There never has been and there never will be a personality as magnetic as that of Julia Child.  Greeting everything she did with gusto and gumption, she made impressions well-worth remembering.  Her impact on the world of cookery is the stuff of legend.

On August 15, 2012 she would have been 100 years old, having died in 2004 just two days before her 92nd birthday.  To commemorate her contributions and in celebration of her 100th birthday two picture books were released within weeks of one another in May.  The first, Minette's Feast:  The Delicious Story of Julia Child and Her Cat by Susanna Reich with illustrations by Amy Bates, a delightful blend of text, pencil and watercolor, is reviewed here. 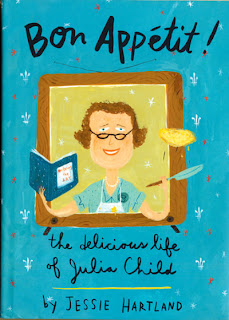 Bon Appetit! The Delicious Life of Julia Child penned and pictured by Jessie Hartland was featured at Jama's Alphabet Soup with an interesting and informative interview and numerous pages posted from the book.  Five days ago it received a nomination in the picture book nonfiction category of the 2012 Nerdy Book Club Award.  Jessie Hartland has given readers a book that is the essence of Julia Child.


She bubbled over with effervescence, spoke as if she had marbles in her mouth, and gleefully hammed it up in front of the camera.

Yes, that is the Julia Child people around the world grew to love...and still do to this day.  But she did not begin knowing she would be part of a spy mission, move to Paris (among other cities outside of the United States), write a cookbook, or have her own television show.  We are told when she was born and where as well as the number of siblings she had (all tall).

What really endears readers to this child with a mind of her own are the facts of her prankster side; throwing mud pies at cars, playing "hooking" on roller skates and being a tomboy in every sense of the word.  At an early age Julie's love of eating just about anything was evident as was the largeness of her feet---12 shoe size!  Her family's wealth allowed her to attend  private schools and Smith College in Massachusetts where pranks such as painting a toilet seat red continued.

After graduation several writing jobs left her feeling unsettled moving from the east coast back to the west.  It's when World War II starts, a shift starts for Julia too.  The nature of her job with the Office of Strategic Services introduced her to the world of travel and to the love of her life, Paul Child.

The first of many moves associated with Paul's work brings them to France and the Cordon Bleu cooking school.  It is there the recipe for the rest of her life, ingredients added year by year, is first realized.  Connections are made, some continuing for a lifetime, through her zest for bringing the ups and downs of cooking to all people everywhere.


Even without the bibliography at the book's end the writing of Jessie Hartland is spiced like the most flavorful entree with delectable tidbits from Julia Child's life indicating her thorough and complete research and....love of her subject.  The excellence is evident in her details and the way she conveys her information.  She gives readers insight into the personality quirks of her character making her more fully human and alive for us once again.

Here is an example.

What the heck is Welsh rabbit?

It's a mix of beer cheese mustard that is cooked together and served over toast.

Nothing to do with bunnies.  whew.


All of the book's illustrations were rendered in gouache.  The bright turquoise cover with Julia front and center on a old style television screen is an open invitation.  Red and white striped endpapers covered with black-etched doodle-like drawings of ingredients, cooking utensils, and memorabilia of all things Julia are labeled in English in the front and in French in the back.  Every single page is filled with images and accompanying text carefully pieced together like the most loving of scrapbooks.

All of the text is hand lettered varying in size and placement; next to, over, under and around her pictures.  A combination of colors, shades of green, blue, red, brown and gold, are complimented with black and white.  No detail is overlooked.  Hartland even includes a two page spread complete with a 32 step recipe for  a galantine!  An added bonus is her own personal recipe for crepes at the end of the book.


Bon Appetit!  The Delicious Life of Julia Child is so rich in narrative and illustrations you can almost hear the faints sounds of Paris in the background, smell butter warming in a pan and yes...the voice of Julia Child bright, bold, funny and warm guiding and instructing you in yet another cooking endeavor.  Whether you grew up with Julia Child or are meeting her for the first time, there is something in this title for everyone, something about her with which most readers can identify.

Here is a link to the publisher's website with extra images from the title.