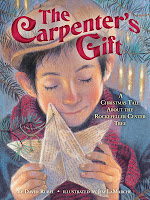 A week ago, Wednesday, November 28th, John Schumacher, teacher librarian and blogger at Watch. Connect. Read., Colby Sharp, fourth grade teacher and blogger at sharpread and David Rubel, author, historian and speaker, focused on a single significant book, The Carpenter's Gift: A Christmas Tale About The Rockefeller Center Tree (Random House, September 27, 2011).  Written by David Rubel with illustrations by Jim LaMarche this title depicts a beginning, a tradition continuing today, of the Christmas tree at Rockefeller Center.  It is a story of the circle of giving. 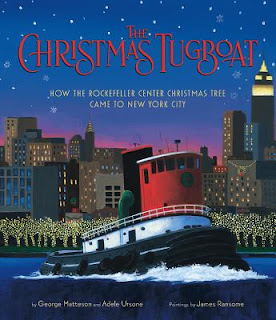 I can't help but think a perfect companion to this title would be the newly released (October 30, 2012) The Christmas Tugboat:  How The Rockefeller Center Christmas Tree Came To New York City (Clarion Books, Houghton Mifflin Harcourt) written by husband and wife, George Matteson and Adele Ursone with paintings by James E. Ransome.  Narrated by the daughter of a New York Harbor tugboat captain we are given an intimate peek into a past memorable moment.

Sometime in the middle of the night,
I wake to the ringing of my dad's alarm clock.

Normally her Dad would quietly get dressed and leave the house headed toward the harbor for his work, but on this day she and her Mom are going with him.  On this day the tugboat is heading up the Hudson River to bring back the Christmas tree for Rockefeller Center in New York City.  Through the darkness as the city sleeps they walk along the dock, boarding the tugboat with Mom tending the lines as she and her Dad go below to get the engine started.

Lines cast off, her Dad gently guides the tugboat away from the pier past the sights of the city.  Oatmeal breakfast in the pilothouse, storytelling, painting pictures as well as chores on board and even steering the tugboat herself, help the time to pass.  Near nightfall as they reach Stony Point, a huge barge appears laden with giant red ball ornaments, a truck and truck bed loaded with an enormous tree.

After securing the barge to the tugboat they begin the journey home, down the dark river navigating by buoys and lights on shore.  Dinner is eaten, the winter winds start to whistle but they are able to spend the night moored to an abandoned pier as planned. It seems as though her Mom has just finished singing her favorite barges song as they are lying in the bunks, when the rumble of the tugboat engine awakens them the next morning.

Traveling through the frosty air surrounded by the rose-colored dawn sky they get closer to their destination.  Approaching the George Washington Bridge, helicopters hoover noting their arrival.  Two police boats, a tour boat filled with school children and a fireboat escort them into the harbor. Her knowing Dad grants her a special honor until they dock beneath the Manhattan Bridge.  One final gesture of kindness completes this very special journey never to be forgotten by a girl, her Mom and her Dad, a New York Harbor tugboat captain.


Based upon a true story authors George Matteson and Adele Ursone bring an intimacy to this telling.  Specific sensory descriptions recall small segments of time; colder air in the engine room, shivering boat as the engine starts, the secure warmth of her Dad's embrace as she sits on his lap watching the river at night, the frosted branches on the tree at dawn.  Nearly poetic, often heartwarming details, bring the reader into the story.  Here are only a couple of examples.

A half moon glows high in the sky.  Stars begin to appear around it, and a cold wind rises with the darkness.  The water is black, and the pinpoints of light on shore are so bright, they seem to be set right in the pilothouse windows.


When you open the jacket and cover, identically illustrated, the acrylic paintings of James E. Ransome reach out in warmth to the reader capturing the beginning on the front and the splendid ending on the back, the brightly lit Christmas Tree in Rockefeller Center.  Opening and closing endpapers show the New York City skyline, buildings tall against a gray sky, snow falling as the tugboat heads up the river, the Statute of Liberty tiny in the distance.  A close-up of a bridge spans across the first two pages delegated for the title information tucked beneath on the right side with the tugboat chugging off the page.

The following two pages, for publication information and the dedication shows a segment of the family home, dawn breaking in the east. Throughout most of the book rich, colorful two-page panoramic views spread from edge to edge.  At times a closer, more personal view on a single page will be used with text framed on the opposite page.  Ransome's paintings beautifully portray and enhance the narrative.


The Christmas Tugboat:  How The Rockefeller Center Christmas Tree Came To New York City takes two very special days from a lifetime highlighting the extraordinary within the ordinary.  George Matteson and Adele Ursone give voice to their daughter's experience with a clear understanding of her memories.  James E. Ransome gives readers a pictorial perspective of those same memories.  The combination of the two is perfect.

Both George Matteson and James E. Ransome offer their comments at the story's end.


I believe both of these titles offer the opportunity for further investigations about, for example, Habit for Humanity, Rockefeller Center, the history of bridges in New York City or points of interest around and along the Hudson River.  Given the importance of pinecones in each I am reminded of the folktale from The Har(t)z Mountains in Germany, about the silver pinecones.    There is a silver pinecone on display in my own home year-round.
Posted by Xena's Mom at 7:36 AM