A Founding Father That Broke The Mold

Good biographical literature not only leaves the reader with a greater appreciation for the person's life but also for the biographer.  An author's commitment to presenting the truth, spending countless years on research, is akin to being on a treasure hunt; how fortunate for readers is their willingness to share their discovered riches. Their mastery in recreating a life is evident when readers are transported back to a place, a time and into the presence of person no longer living. 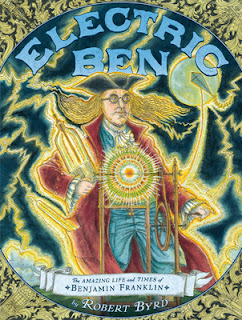 One of the titles listed in the 2012 Nerdy Book Club Award Nominees, Horn Book Fanfare 2012, and Kirkus Best Children's Books of 2012 is by author/illustrator Robert Byrd.  Robert Byrd's book, Electric Ben: The Amazing Life and Times of Benjamin Franklin, brings depth and width to this man's life.  Within forty pages we learn how truly accomplished Benjamin Franklin was then and how those achievements are a part of our everyday lives now.

A boy about ten years old was swimming in a pond in early colonial Massachusetts.  He was a strong swimmer, and after a while he floated on his back, looking up at the sky.

This is how readers are introduced to Benjamin Franklin.  We discover on this day he used kite flying(no storm clouds were present) to pull him across the water as his friends cheered from the shore. We discover he came from poor beginnings and remained a champion for the working class his entire life.  We discover no American was more well known in the world than he was during his lifetime.

Throughout the remainder of the book, as is this Introduction, two pages are devoted to a particular aspect of Franklin's life. Those sections are titled:

We see the city of Boston into which Benjamin Franklin was born, the last of fourteen children, on January 17, 1706 vividly described as a hub of activity.  If you're wondering why his family was so large, it's because all the members were needed to work and...only half the children born during this time period survived.

We read of Ben's aptitude for learning noticed by his parents early in his life but by the age of ten he was working in his father's soap and candle shop.  We read of his father sending him as an apprentice to his older brother, James, a printer, to curb his yearning for a life at sea.  We read it was here his love of books, writing and reading flourished much to the chagrin of his brother; they battled constantly.

We understand why Ben wrote articles for his brother's paper posing as a woman, Silence Dogood, which became very popular.  We understand when his ruse was discovered he had to run away, making his new home in Philadelphia.  We find it hard to, but we do understand on his first day there he walked by Deborah Read, his future wife, though neither of them had any knowledge of the other.

We learn Philadelphia would remain Benjamin Franklin's home until his death at the age of eighty-four.  We learn of his struggle to build a thriving printing business; going to England to obtain a printing press and being asked to stay to open a swimming school.  We learn how he was able to make a fortune printing his Almanack for twenty-five years.

We are amazed by the many firsts attached to the name of Franklin; key founder of the first hospital in America, introduced home delivery of mail for a penny a letter, the scientific method, what we know as the Franklin Stove, and the odometer.  We are amazed he practiced cold air baths sitting naked in a cold room reading to maintain his health.  We are amazed his discovery that every positive electrical charge has a matching negative charge is the foundation of electrical science today.

We admire his skills as a negotiator with the Native Americans, French and English before, during and after the Revolution earning him respect.  We admire his assistance in writing the Declaration of Independence but also being the only founding father to sign that, the peace treaty with England and the Constitution.  We admire despite being confined to his bed during the last months of his life, Benjamin Franklin wrote many letters; the last one to...Thomas Jefferson.

Robert Byrd writes with the heart of a storyteller weaving his discoveries of Benjamin Franklin's life into a narrative that flows like fiction.  Quotes from Franklin's work appear frequently within the body of the text or as insets within a page. His skill at including exactly what his intended audience may want or need to know about the man is flawless.  As an example, he begins the two page discussion about Franklin's interest in electricity with a general, two-paragraph overview of lightning. He concludes the second paragraph saying:

Even in Franklin's day, religious figures in America and Europe ranted that the ravages of lightning were punishment from God for sinful behavior.  But it was at this time that curious men were just beginning to understand the fundamentals of electricity.  Benjamin Franklin was one of these curious men.


Rendered in ink-line, watercolor and colored ink all the illustrations reach out and pull you into the narrative beginning with the eye-catching jacket and cover.  The back pictures a harbor scene in the same oval shape found on the front.  Above the scene is one of Benjamin Franklin's quotes,

"If you would not be forgotten
As soon as you are dead and rotten,
Either write things worth reading,
Or do things worth the writing."

Open and closing endpapers picture lines of famous sayings in an old style typeface.  Each of the two-page sections features a large painting placed in varied positions, sometimes crossing the gutter.  Depending on the topic, smaller visuals will be placed to complete the composition maintaining the two-column layout.  All of the illustrations are labeled with captions or explanations.

A creme colored background highlights all the text and images reminiscent of old newsprint.  Byrd elected to use a brightly, colored realistic palette conveying a keen sense of time, place and people.
Tiny, exquisite details add to the excellence.


Electric Ben:  The Amazing Life and Times of Benjamin Franklin written and illustrated by Robert Byrd is an unforgettable, entertaining and informative discourse on a life well-lived.  You may think you know Ben Franklin but when you finish this book you'll realize there was so much more to this remarkable man.  Thank you Robert Byrd for a title that rises to the top.

At the book's end is an author's note about Robert Byrd's writing and illustrating of this title, a timeline and bibliography.  If you follow the link to Byrd's website embedded in his name above he has included seven two-page spreads (beautiful)  from the book as well as the front and back jacket and cover.
Posted by Xena's Mom at 8:16 AM