Letter by Letter From A To Z, Dinosaurs Live From Prehistory

Spotting it on the shelf from the other side of the store, not even seeing the title yet, I knew I had to have it.  A distinctive design and signature style set it apart from the other books in the nonfiction section.  As I picked it up, looking at the front and back of the jacket reading the title, it was hard not to gasp aloud.  I know for sure I was grinning on the outside but jumping up and down on the inside. 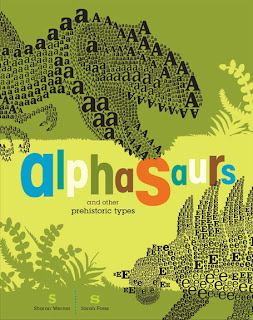 In July of 2009 the graphic design team of Sharon Werner and Sarah Forss, owners of Werner Design Werks, located in St. Paul, Minnesota, published their first book, Alphabesties: And Other Amazing Types (Blue Apple Books) bringing them the 2009 Oppenheim Toy Portfolio Gold Medal Best Book Award and the 2009 Parents' Choice Silver Honor Winner.  The equally impressive and entertaining Bugs By The Numbers (Blue Apple Books)(reviewed here) followed in 2011.  Alphasaurs and other prehistoric types (Blue Apple Books), their third and newest title, is an alphabetical look at creatures from prehistoric periods that, in a word, is amazing.


Scary and scaly,
lumbering and lumpy,
fast and ferocious,
big, broad and bumpy.
From up north to down south,
from west to east,
The earth was once home to magnificent beasts.

So begins the rhyming introduction that invites readers to step back in time, entering the world recreated by Werner and Forss.  For each letter of the alphabet a dinosaur name is written on the page with a phonetic pronunciation beneath.  In smaller type on one of the page corners readers will note the time period in which this creature belonged along with whether it ate meat or plants.

Usually along the bottom of a two page spread (ten are single page) alliterative facts focus on outstanding characteristics.  At times more notes will appear as if typewritten in a field notebook drawing attention to further specifics. Careful readers will see even more information displayed in the lines used to replicate a particular setting (leaves), the curve of spine or jaw.

What makes this book notable, as were the previous two, is the technique employed to illustrate the animals, insects and now, dinosaurs.  Letter by letter, using twenty-six unique typefaces for each dinosaur, their shapes are formed by the letter beginning their name.  Lower case, upper case, small medium and large letters are placed, some more bold than others drawing attention to a physical quality, with artistic care and flair.

Each small window of facts along the bottom also incorporates the letter of the moment in the pictorial design.  The words beginning with that letter in the statement or phrase will be darker.  There are eight fold-outs with die-cuts in each.

The front and back endpapers are a series of small lines in varying thicknesses which initially look like colored stripes but are in fact lines of information.  The two pages for the title have the publication information tucked in the lower left hand corner.  A large Tyrannosaurus Rex head is coming in from the right taking the "s" in Alphasaurs in its teeth.

For each of the featured dinosaurs they are placed on vivid, varied solid color backgrounds, to set them apart, surround by space and for some the outlines of their natural habitat.  None of the letters spelling out the dinosaur names are the same color; their palettes part of the color scheme for a particular page or pages.  To enhance interest the dinosaurs are facing in various directions at each turn of page; those on single pages may cross the gutter becoming part of another design.

For the letter "b" Werner and Forss selected brachiosaurus.  The prehistoric wonder is spread across two pages with the long neck curving from right back to left, the tail hidden beheld some foliage.  When the foliage is unfolded the tail is extended to its full length.  On the right side is another fold which lifts up highlighting the neck when fully extended to get leaves on a tree top.  Of the four small windows of facts along the bottom one, for example, says This big beast was as tall as a 4-story building.  The stories in the building are made of the capital letter 'b" with the spaces colored white to appear like lights


Alphasaurs and other prehistoric types designed, illustrated and written by Sharon Werner and Sarah Forss is another stunning entry in their body of work.  Dinosaur lovers will feel like they've struck gold as they read through the pages.  My guess is....everyone else will feel the same way too.  Now let's see...which one was the size of a muskrat gliding with four wings to move?

Werner's and Forss's main website is linked to the name of their business at the top.  For a peek at some of the illustrations in the book follow the link embedded in the title directly above.  Please note at the end of the book Werner and Forss list four other important things they learned in the making of this title.
Posted by Xena's Mom at 7:22 AM