Some of the most beloved stories, those most remembered into adult years, begin with, Once upon a time... and close with happily ever after.  In fact, in my experience, those seven words have an almost universal effect on listeners; people know something out of the ordinary is going to happen in-between.  When Once upon a time is read or said, anticipation grows, listeners lean in or move closer.  At the sound of happily ever after, there is always a collective silent or audible sigh. 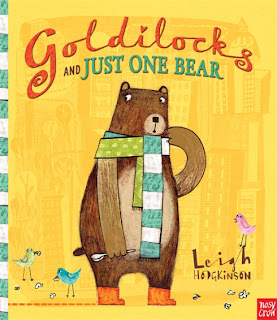 Have you ever wondered, though, what happens after happily ever after.  Do The Three Pigs start a construction company specializing in earthship homes?  Does Little Red Riding Hood become an activist for the protection of wolves?  Do Hansel and Gretel open a health food store? Or as in Goldilocks and Just One Bear (Nosy Crow, an imprint of Candlewick Press, August 14, 2012) written and illustrated by Leigh Hodgkinson does what you least expect happen?


Once upon a time, there was this bear.
One minute, he was strolling in the woods,
all happy-go-lucky...
The next minute, he didn't have a crumb-of-a-clue
where he was.

In fact, this bear has gotten so far off course, he is no longer in the woods.  He is smack dab in the middle of a noisy, busy city, standing on the sidewalk in front of an apartment building.  He's pretty shaky at this point so he strolls into the entrance of Snooty Towers only to be more confounded by the revolving door.

Seventeen-floors-up later he is glancing into someone's cozy penthouse.  The peace and quiet are exactly what he needs as soon as he satisfies his hunger cravings.  These people certainly have terrible taste in porridge.

Their chairs are prickly, screechy and not quite as comfy as a real bed. On the third try he finds the perfect spot, a bed fit for a lost bear, for drifting off into dreamland. As you can imagine when the daddy person, mommy person and little person return home the longed-for solitude is shattered.

Who could have been drinking from the fishbowl?  Who sat on the cat? And who, yes who, is sleeping in the little person's bed?  Picture if you can when recognition dawns on two members in this group.  The tables are turned in a most delightful way.


The upbeat, you'll-never-guess-what-happened-next narrative penned by Leigh Hodgkinson is a welcoming invitation into the bear's adventure.  Comparisons, descriptive words and phrases, and the grouping of threes leave little doubt in readers' minds, they have entered into the world of fairy tales, albeit a much more modern one.  Humor, the appropriate exaggerations, placed at the perfect point to compliment the pace are the crowning touch.


Unfolding the matching jacket and cover offers astute observers a possible hint of the story's outcome; the red line from the bear's boot moving left to the back, winding through the forest where we see a golden-haired girl eating a bowl of porridge. Opening and closing endpapers, done in shades of blueprint blue, each different, show maps of the bear's trips to, and from, the city, marked by dotted lines from points A to B. An opening page of leaves, in a variety of unusual colors (lime, pink, navy blue, turquoise) scattered around a tree stump, bear's empty boots on top, with three birds perched on them, surrounded by white space provides a peek into the color palette used throughout the book.

Hodgkinson's clever, masterful use of mixed media not only extends the storyline but tells a tale not told by the text.  This chair is too ouchy shows bear trying to sit on the arm of a cactus.  Although she alternates between two-page spreads, single pages (some crossing the gutter), singular close-ups of bear grouped together, the flow is flawless.  Exquisite detail can be found at every turn of page; the leaves on the first page are part of the pattern on the little person's bedspread, the stores in the city have names such as Wolf's Clothing Boutique, The Coffee Beanstalk and The Ugly Sisters Beauty Parlor, the bear is always carrying the spoon or it can be seen in the illustration, the special text types used with certain words and at the conclusion the look on the cat's face is definitely wary unlike the happy grins worn by others in the room.


Walk with bear into fractured, fairy tale fun of the first order in Goldilocks and Just One Bear.  Author/illustrator Leigh Hodgkinson's writing and illustrations work beautifully together in a bright, spunky, funky sort of way.  Links to Hodgkinson's website and blog are embedded in her name.  Follow this link to Nosy Crow's page for some inside views of the book.  This link is to the Candlewick Press website for another glimpse inside the book.  I knew the illustrations in this book were outstanding, so I checked the CILIP Kate Greenaway Medal longlist for 2013 and it was there!
Posted by Xena's Mom at 6:43 AM