It may be the middle of December, decades may have gone by, but the memory is as fresh as if it were yesterday.  One of the best days of my life was shopping with my Dad for my first and only baseball mitt.  Ever the practical man, not wanting my glove to get lost or blend in with the others, mine was black.  Many an hour was spent caring for the leather and placing a ball in the glove's pocket, fingers tied to form around the shape. 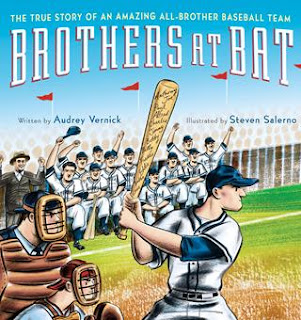 Softball season year after year made for sensational summers; me loving the thrill of throwing a ball to home plate from third to snag the out or running to catch a pop fly.  When Brothers At Bat:  The True Story Of An Amazing All-Brothers Baseball Team (Clarion Books, April 3, 2012) by Audrey Vernick, illustrated by Steven Salerno, garnered a spot on the 2012 Nerdy Book Club Award Nominees list, I knew I had to read it.  It boggles the mind to think all the team members were from the same family.


WHEN WINTER'S CHILL melts into spring, back doors swing
open and slap shut as kids just home from school run outside---
mitts, bat, and balls in hand.

At the Acerra house the back door did not open and swing shut once but twelve times as all the brothers ran outside for a game of baseball.  Four sisters were part of this family, but never played ball.  It was the 1930s.

With a family of sixteen children their outhouse was a three-seater, beds were shared and dinner was like a church potluck, each looking for the first available seat.  But baseball...baseball defined their lives.  After playing high school baseball, in 1938 the oldest nine started their own semi-pro team with their father as coach.

Game after game, year after year, members of the team, the brothers, made their mark in the annals of baseball history; hitting home runs into the Atlantic Ocean, having a knuckleball no one could hit, or never competing against each other, a team in every sense of the word.  During the 1939 New York World's Fair this incredible family from New Jersey was honored, flown to the fairgrounds.

The downside of life did intrude in the form of a bad accident on the field and World War II.  But the Acerra family endured supporting one another even when separated by distance and time.  Finally reunited again, playing again and making history again, the Acerras drew huge crowds for each and every game until their last in 1952.  In 1997 their accomplishments were recognized on a national level, much to their amazement.


In her author's note, Audrey Vernick explains how she came to hear of the Accera brothers' story, how one evening she found herself having a spaghetti dinner with Freddie and Eddie.  I can only imagine the excitement of spending time talking with two of these brothers.  Her passion for their story, her skill at recreating the past for her readers is clearly evident on each page.

You can almost hear the sounds of ball on bat or glove, a runner sliding into a base or the narration of an announcer as Vernick writes in a friendly, one-on-one conversational manner.  Her inclusion of perfect points is what makes this a standout biography, enjoyable for all readers. She makes the family, the brothers and their brand of baseball live again.


Looking at the illustrations rendered with black crayon, gouache, watercolor and pastel with added digital color using Adobe Photoshop, by Steven Salerno one word comes to mind---stunning.  His blend of mediums, color choices, layout and perspective make the reader feel like they are surrounded by the past.  It's as if you've stepped through a time portal.

Shades of blue, green and golden yellow are prominent but Salerno does not hesitate to modify this if the narrative requires him to do so. Opening the story with a two page spread, he follows with a grouping of four smaller pictures and then two single pages changing his size to enhance the text.  Most of his visuals go to the page edge except for the small insets found with the text.

Salerno's ability to create New Jersey neighborhoods changing with the decades is first-class.  His four pages about the six brothers going to fight in World War II are brilliantly conceived.  While I have many favorites in this title, the last two pages showing the three generations playing ball, like the background, is golden.


Brothers At Bat: The True Story Of An Amazing All-Brother Baseball Team written by Audrey Vernick with illustrations by Steven Salerno is an outstanding picture book biography for several reasons, the easy, familiar accounting, the design, detail and skill used in the illustrations, the blending of the text with the pictures but most of all for the warmth the reader feels when they become acquainted with these brothers.  Reading this title makes you want to read more about the Acerra brothers, baseball, World's Fairs, or World War II because the past is so vividly brought to life.  I know for a fact I'm going to try to find my baseball glove.

Please follow the links to the author's and illustrator's websites by clicking on their names.  Steven Salerno has a fantastic display of illustrations from this title on his site.  Here is a link to A Classroom Discussion and Activity Guide.  Audrey Vernick had a special day at The Baseball Hall of Fame; article is linked here.  The video below was posted on YouTube by Audrey Vernick. It is actual footage of the brothers playing a game.