Listen...did you hear a loud ka-boom?  Did a boy wearing a lab coat go running past?  Did that dog just talk? 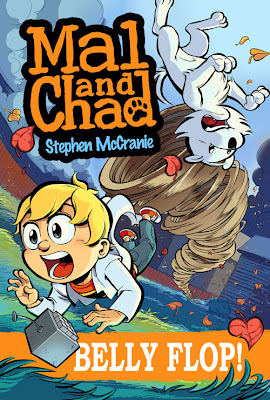 If you answered yes to all those questions you have entered the world of Mal and Chad, an inventive guy genius and his talking canine companion.  Creations of graphic artist, Stephen McCranie, their third adventure was released on December 6, 2012.  With every turn of page Belly Flop! (Philomel Books) brings readers closer into the lives of this perfect pair of pals.


This episode begins with one of Mal's inventions going slightly haywire.  The small arm meant to come out from the top of his alarm clock and wake him up with a gentle tap on the head, pops out swinging.  Luckily Chad hits the snooze button before Mal ends up all black and blue.

Barely making the bus on time, he arrives at Einstein Elementary to sit in his favorite spot, the base of the large bust of Albert E outside the school.  It seems that his major crush (who barely acknowledges him), Megan is handing out birthday party invitations.  By the end of the day it looks as if Mal's awkward social skills will prevent an invite until his chivalry toward Megan attracts attention.  He's going to the party!

The dilemma of the quintessential gift, how to afford the purchase price, the use of the weather cube to do chores backfiring, getting caught on a windmill blade, a too-close encounter with his super-duper glue and an embarrassing dip in a pond, leave Mal feeling very un-cool, down in the proverbial dumps.  Never fear...Chad to the rescue.  Satisfying his craving for snow cones, Chad has been busy with Mal's weather cube.  One snowball fight, snow angels and an ice castle later all is well...or is it?

Still trying to win Megan's attention, or more, Mal masters a magic act for an entry in the school talent show.  A fiasco ensues involving a tarantula named Susan, a levitation mishap and a blizzard. Will Mal make it home in time to save his best bud from the out-of-control giant snowflakes and lightning hail?  What's a Musketeer doing in the middle of the blizzard?  Friendship, the true-blue-forever kind, in all its shapes and sizes triumphs.


Stephen McCranie's skills as a writer are obvious in the dialogue between his characters exhibited realistically, full of life and emotion; each statement revealing the speaker's personality.  Through conversations between Mal and Chad readers are privy to the deep affection and loyalty they share, one for the other.  The pacing from one speech bubble to the next is smooth, fast and completely engaging.


McCranie is an absolute master at designing the layout of his panels.  The panels on each page are placed together like pieces on a puzzle, the pages becoming pieces in the larger puzzle of the story. Alternating size to accommodate the moments, events and action and shifting perspective generate a pleasing whole.

Portions of the items in a panel move outside the edges to add interest, movement and enhance the flow of the narrative.  Lines in the text and visuals increase in size, width and boldness for emphasis.  Liberal use of sound words, onomatopoeia, draw the reader into the story.


My new copy of Belly Flop!: Mal and Chad 3 written and illustrated by Stephen McCranie is filled with dozens of small sticky notes extending from the pages marking dialogue and visuals I deem as memorable, outstanding in their delivery.  To be sure, the action, even in the day to day events at school, is non-stop.  But there are moments that will touch your heart and leave a mark.  This particular inventive guy genius and his canine companion have become treasured characters in my literary life.  Well done, Stephen McCranie.