A very special place exists on our planet.  Of the mammals living there, eighty percent are found nowhere else on Earth.  It has been proposed these unique forms of life thrive due to geographic isolation and climate.

This special place, home to these unique mammals, is, of course, the continent of Australia.  Calling the island their home are wombats; small bearlike creatures with a backward pouch for holding their young, diggers and herbivores.  Australian author Jackie French and illustrator Bruce Whatley introduced Mothball to readers first in Diary of a Wombat (Clarion Books, 2003), followed by Diary of a Baby Wombat (Clarion Books, 2010). 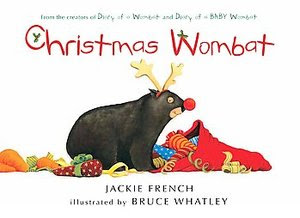 To the delight of fans of the two previous titles, Christmas Wombat (Clarion Books) was released in the United States two months ago in time for this holiday season.

Wombat's usual routine of sleeping, scratching, more sleeping, feasting on grass and taking a meandering stroll is interrupted by several new objects and unusual critters but most of all...by the smell of carrots.  These aren't carrots recently picked from a garden.  These are carrots specifically left for the strange creatures, reindeer.

Wombat is not in the mood to share.  No siree, Bob.  A battle is waged with Wombat the victor.  Full of the crunchy orange goodness she settles in for a nap...on the runners of Santa's sleigh!

Home to home, those tasty treats are all hers again and again.  Chimneys don't seem to make the best wombat holes though.  Touring the world, finding the strange creatures can come in handy and not quite believing there are so many carrots, Wombat is delivered back to her hole where she falls into a belly-filled, wombat-style deep sleep.


Demonstrating the power of a simple phrase or a single word, Jackie French immediately invites readers to follow Wombat on her extraordinary journey.  The succinct deadpan narrative is in character with French's real life observations of wombat behavior.  From page one the humor begins and continues until the final word.


Relying on extensive use of white space Bruce Whatley's acrylic paintings on watercolor paper highlight Wombat flawlessly as she moves through her daily routine.  Showing her various positions as she sleeps, scratches, eats, strolls and runs are downright hilarious.  Movement is shown by following her routine from left to right ending with only her back-body portion shown on the edge as she strolls on.  At the turn of page we see her front-body portion as she gets her first whiff of carrots before breaking into a speedy advance.

Attitude and emotion are conveyed with an ever so subtle change in the eyes of Wombat and the reindeer, a shift in the pupil or eyelids.  Rich colors add further warmth to the story as do the little details of autumn leaves on the sleigh runners, holiday patterns on stockings hung on the mantle, Wombat holding a toucan's beak and the ribbons and holly decorating the reindeer at the close of the evening's ride. There are only two pages, side by side, where Whatley uses full color bleeding out to the edges; a starlight sky above the Earth, a portion of the sleigh with Wombat fast asleep, feet raised, on the runners.  It is one of my favorite illustrations in this title.


This Wombat knows and goes exactly where her nose takes her in pursuit of carrot cuisine.  Beginning with the front and back jacket and cover with carrots of all sizes wrapped in paper and bows, Christmas Wombat by Jackie French with illustrations by Bruce Whatley is a seasonal delight.  A perfect marriage of text and illustrations makes it nearly impossible to read without grinning from ear to ear or letting out a giggle or two.  I'm also wishing Santa would leave me a stuffed toy Wombat in my stocking to cuddle when I'm reading this book.
Posted by Xena's Mom at 6:33 AM