Hours spent walking in the woods of northern Michigan, the past thirteen years with my canine companion, Xena, have taught me to be aware of her perceptions of our surroundings.  A sudden pause, nose uplifted, a refusal to walk in one direction or growling barks heighten my attention, my guard.  A unusual silence without insect chirping, frog croaking or birdsong is also a very clear signal. 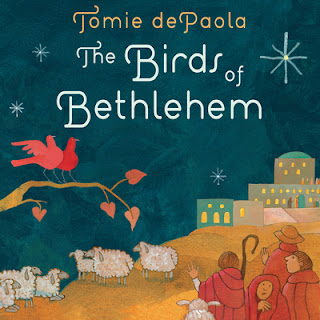 For the sake of preservation creatures in our natural world are instinctively aware of shifts from the norm; keen observers every one.  Thousands of years ago in a small town located in Judea our feathered flying friends knew uncommon events had transpired.  Author/illustrator Tomie dePaola has written and painted a profoundly respectful portrayal of The Nativity for younger readers, The Birds of Bethlehem  (Nancy Paulsen Books, an imprint of Penguin Group).

Every morning,
the birds of Bethlehem
gathered in the field to
glean any corn that might
be left from the harvest.

Pairs of birds, named for primary colors, a mix of same and the absence of color, have paused in their eating to share news much like their modern human counterparts gathered at the local coffee shop.  Yesterday extraordinary events were noticed, pieces of a greater whole.  Green bird and his mate relate how they have never seen such a long line of people walking along the hilltops.

Each bird in turn with their partner has a tiny tale to tell; yellow bird, blue bird, red bird, brown bird and white bird.  Perhaps due to the gathering of people it was noticed the town's inn was full; so full a man and his wife were taken to a stable.  According to red bird and his mate, an Angel appeared to a group of shepherd's tending their sheep, bidding them to go as fast as they could to Bethlehem to see a child lying in a manger.

Two more, roosting in the same tree, that same evening heard and saw a chorus of Angels proclaiming joyful news from the Heavens.  Amazed by the sight, the final pair of birds, the white birds, followed the shepherds to the stable.  Tied together, these tiny tales, create a remarkable story; a story which cannot be ignored by the flock who seek to see its ending.


If readers were to think of birds and their place in the scheme of the animal kingdom, they might assign them the duty of messenger; greeting the sunrise with song, sounding the alarm when predators approach young or their noisy chatter in flocks racing to their roosts at night.  Tomie dePaola's use of birds to tell his story feels exactly right.  His simple narrative is like a whispered conversation, an expectant hush falling over the gathering as each recounts the wondrous things they have seen and heard for the very first time.


Tomie dePaola's artwork is uniquely his own.  The silver foiled letters on the front jacket sparkle like the stars, the Star, on the Holy Night.  Rich shades of midnight blue, stars scattered across the pages, cover the endpapers.  Illustrations rendered in opaque acrylics on handmade watercolor paper have a texture to them; sand, wind, dry dusty heat.

Although his birds are green, yellow, blue, red, brown and white, the shades he has chosen for each are more those one might associate with the Mediterranean area.  All of the illustrations are two page, left to right, edge to edge, a panoramic sense, alluding to the greatness of this story.  The details of the arched window over the checkered base, the small figures of Joseph leading Mary on the donkey in the line of people on the hilltop, the heart-shaped leaves on the trees and the Star looking like a rose window over the stable contribute to dePaola's rich rendition of The Nativity.


Tomie dePaola's The Birds of Bethlehem shines as brightly as the stars on that night so long ago, eloquent in its simplicity.

Please follow the link embedded in Tomie dePaola's name above to enjoy all the extras at his website.  This is a link to the Community of Redwoods Monastery recipient of dePaola's dedication along with one of the residents, Sister Veronique.
Posted by Xena's Mom at 6:58 AM