Even before all the scientific studies, we knew in our deepest selves the power of laughter; feeling an overall sense of well-being the harder and longer we laughed.  Shared laughter with children, students, is the best of the best; the sound of their immediate joy, heavenly.  Having a sense of humor fine-tuned to the slightest nuance in a narrative or picture makes them the perfect candidates for the enjoyment found in a good story. 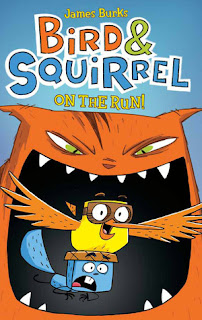 The popularity of graphic novels has thankfully grown by proverbial leaps and bounds in the past several years.  Their ability to hook those reluctant to read, with tightly woven narratives (some wordless) and artwork stunning in layout, design and detail, is a source of pleasure for all who want to bring more members into the reading community.  When looking through the nominations for the 2012 Nerdy Book Club Award for graphic novels, Bird & Squirrel On The Run! (Graphix, an imprint of Scholastic) written and illustrated by James Burks caught my eye; a title already on my TBR pile.

Zooming through the trees the delight of Bird is obvious as he extends joyous greetings to one and all.  Nearby Squirrel is on a mission scurrying with infinite care from point to point, ever alert to danger, to get one final acorn for his winter stash.  All is well until Bird swoops down and nearly scares him to death.

Speaking of death...Squirrel is sure vigilance is necessary to:  1. keep the Cat from enjoying him as a meal and  2. make sure he has enough acorns stored to fend off starvation during the winter. Squirrel turns down all invitations to fly with Bird determined to make it home with his last load.  But Bird flies back into his life much sooner than he thought he would.

Due to his devil-may-care curiosity Cat is now hot on Bird's tail.  Squirrel becomes a reluctant hero but looses all his food.  Circumstances have left Squirrel with no choice.  He has to travel south with Bird.

Neither the raging waters of a river and waterfall, the thunder and lightning of a ferocious storm, the deepest dark of an underground home, the vicious attack by a swarm of bees, the sudden cold of snow showers, the dangers of a slithering snake nor the horrors of a hungry hawk can dissuade Bird from his over-the-top optimism.  Squirrel, on the other hand, is nearly paralyzed by his persistent pessimism.  Of course Cat, in possession of at least some of those nine lives, is constantly prowling ready to pounce when they least expect it.

This clash of personalities with danger lurking around every corner leads to a humorous adventure that's an action bonanza.  The tenuous friendship of Bird and Squirrel (more on Squirrel's part than Bird's) is tested again and again.  Readers will be on the edge of their seats wondering if the two can, however briefly, assume some of the other's personality traits in order to complete their trip.  Will they be able to plunge with pleasure into the Great Unknown?


Within the first few pages the stark contrast of descriptive dialogue written by James Burks for his characters leaves no doubt in the reader's mind as to how each views life.  The non-speaking role (except for some loud meows) of Cat as an adversary heightens the differences between the two.  The playful, sometimes taunting, even sarcastic, verbal exchanges provide for laugh-out-loud moments.

Here is a single example after they've driven off a bridge into the river.  Bird begins the conversation.

ARE YOU INSANE?
WE ALMOST DIED.
AND NOW WE HAVE
NO SUPPLIES.

BUT WE GET TO
FLOAT DOWN THE
RIVER ON A LOG,
AND THAT'S
PRETTY COOL.
JUST LISTEN TO
THE SOOTHING
SOUND OF THE
RUNNING WATER.

ACORNS
TO OAKS!
IT'S A WATERFALLLL!


Using bright realistic colors Burks brings us panel by panel, page by page, into the madcap escapades of these two seemingly mismatched pals.  The first two pages with the goggle-clad yellow Bird zipping up and down and around the trees zooming in and out on his flight pattern sets the stage for the ensuing events. Following his pure delight is the furtive, frightened, overly cautious movements of the blue acorn-helmet wearing Squirrel intent on reaching his goal undetected.  Their squarish body shapes (not to mention Squirrel's head looking like a nut when he wears the helmet) add to the comedic effect.  When the plump feline enters the scene with the exaggerated mouth size, an emotional impact is guaranteed.

The looks on all the characters faces, the combination of eyes, mouths and general body language, are hilarious.  Extra details endear readers to the duo; Squirrel having a red bike with a cart attached for hauling nuts, Bird wearing a sink plunger as a hat when they begin their journey.  Then too, there's the faint trail of smoke coming from the Cat's tail hours after he's struck by lightning.  Lucky for Bird and Squirrel, without their knowledge, Burks has given him troubles of his own.


Who doesn't love to laugh?  Written and illustrated by James Burks Bird & Squirrel On The Run! is pure fun; perfect for readers of any age.  Shared troubles on the road south bring about changes, all for the good of a friendship founded and forged on differences.  This is one graphic novel not to be missed.

For more information about James Burks follow the link to his website embedded in his name above.  Here is a link to a page on his blog for drawing Bird.  I thought Bird's idea of a theme song for the friends was pretty cute, so here is a link to my version of his tune.
Posted by Xena's Mom at 8:07 AM