Strike Up The Band!

People like parades.  Whether it's on a grand scale like the Macy's Thanksgiving Day Parade in New York City or the Pasadena Tournament of Roses, The Rose Parade, or our smaller National Cherry Festival in Traverse City or the Venetian Festival in Charlevoix, people will gather days or hours in advance, lines of chairs marking their spots.  All you have to do is watch the children's faces along the route to know how much they are loving every minute of a parade. 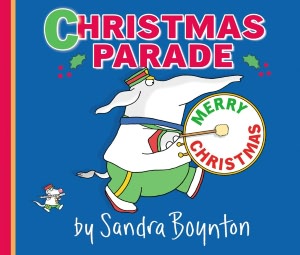 When a holiday coincides with a parade, it has the potential to become a tradition, a memory maker lasting a lifetime.  For decades I have enjoyed the uplifting artwork and witty writing of Sandra Boynton, first on her greeting cards, later in her books and in her music.  For the 2012 holiday season her newest release Christmas Parade (Little Simon, an imprint of Simon and Schuster Children's Publishing) continues, presenting her well-loved characters doing what they do best, making us smile or even laugh out loud.

Pig looks around, sounds are coming in from the street outside.  He runs to the window, delighted by what he sees. Stepping to the beat of his drum dressed in a Christmas uniform is an elephant, leading a line of musicians.

Tossing holly confetti into the air, red-nosed reindeer walk with a jolly ole' Santa rhino.  Saxophones, piccolos, trombones and one very loud tuba round out the group.  Our window-watching pig thinks all is past until he hears a knocking at his door.  It's a spectacular Merry Christmas surprise!


With a rhyming, rhythmic beat as jaunty as the parade of animals dressed in their Christmas best, Sandra Boynton's narrative describes an unexpected treat.  An array of critters not only spread holiday cheer but introduces readers to a collection of musical instruments.  Onomatopoeia abounds.


Who wouldn't want to follow a piccolo playing mouse trailing behind a determined elephant pounding away on a bass drum?  Sandra Boynton captures your attention immediately on the front cover with her signature characters.  Endpapers feature, on a dusty blue background, endless rows of snare-playing hippos marching out from the book.

Colorful shades, mostly of greens and blues, provide a bright engaging background for her members of the parade as they march through the pages.  Varied font sizes and types accentuate the musical quality of her text.  As always the expressive, intent expressions on her characters' faces provide for the underlying humor.  The detail of the pig sitting in his chair wearing white and pink bunny slippers, holding a teddy bear, is hilarious.


Christmas Parade written and illustrated by Sandra Boynton begins as seasonal cheer you hold in your hands, but I guarantee in a few moments readers and listeners alike will begin to move if not march around the room.  It's a happening holiday happiness (complete with hippos).

This is a link to Virtual Keyboard  which will pair nicely with the ending.  If you want to expand your interest in musical instruments head over to this BrainPOP video. Embedded in Sandra Boynton's name above is a link to her official website.  The video below is a CBS Sunday Morning interview which would be wonderful to use in the classroom.