Consistently, year after year, the most requested stories during storytelling units are the scary ones.  Before each session I'm careful to preface it with a discussion of the significance of this type of tale.  My students have come to know I will never tell a story beyond their ability to feel safe, despite their pleas of "tell us one that's really scary".  Due to older brothers and sisters they know when fourth grade rolls around they can finally hear "The Night of the Sasquatch". 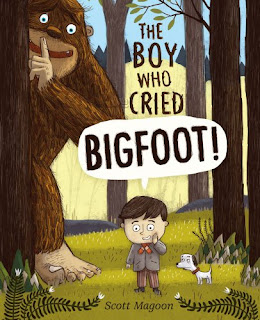 Even after they've heard it, when they've gone to middle school, they want me to tell it again and again.  Perhaps one of the reasons is the story of Sasquatch sits on the line between probable and improbable, true or false.  In his newest title, The Boy Who Cried Bigfoot! (A Paula Wiseman Book), author/illustrator Scott Magoon puts his very special spin on the Aesop fable, The Shepherd Boy and the Wolf.


This is the story of my friend Ben and how we first met.

The first thing readers discover about Ben is he likes telling stories; one particular story over and over.  (At this point you need to insert the word fibs in place of the word stories.) He's pretty creative in his use of gestures and sound effects.

Riding to the edge of the woods on his trusty bike, Ben, like the shepherd boy, is trying to convince people he is seeing something he, in fact, has not seen.  He even goes so far as to fabricate footprints.  As the narrator states:

What a tenacious little fellow he was.

People come once, twice, even three times when he claims to have seen Bigfoot but they finally realize they've been deceived.  Left alone Ben and his faithful canine companion are pondering their precarious position when the silence in the woods is broken by the sound of a stick snapping.  It would seem the teller of this tale has decided to make an appearance.

Not only does he reveal himself but he wants to take Ben's bike for a spin.  Guess who hops on for a ride?  Ben is beside himself, calling for help as loud as he can; his two treasures having vanished into the woods.

Alone in the dark, but not for long, Ben does some thinking.  He needs to convince his family (and neighbors) how his fabrications finally came true.  Ben's a clever little guy; perhaps this new scheme will work.


From the beginning the technique Scott Magoon uses to have an unseen narrator speaking to readers generates an inviting air of mystery.  This simple, conversational tone coupled with Ben's and the secondary characters' dialogues intensifies the interest.  Magoon explains, in a blog post here, how this particular twist on the fable developed.  Of course, even this essay does not explain the final delightful two pages.


Readers know immediately what Ben does not by opening the jacket and cover to reveal Bigfoot hidden, but not hidden, behind a tree in the woods. (The dog does, though.)  Opening and closing endpapers, green on green, feature a pattern of Bigfoot prints though careful viewers will notice a subtle difference between the two.  Digitally-rendered two-page spreads throughout follow Ben on this day to remember; the color palette reflecting the changing light.

Deft, fine lines designate physical characteristics, personality and emotions; especially in the eyes.  While the dog never utters a single sound readers are acutely aware of his reaction in each illustration through his facial expressions and body movements; in a word-hilarious.  It's this attention to details that elevates this larger-than-life legend of learning to excellence.


Travel with Ben on his bike with his best buddy in The Boy Who Cried Bigfoot! written and illustrated by Scott Magoon as he discovers truth really is stranger than fiction.  Readers will be smiling long before the identity of the narrator is divulged with laughter quickly following.  For more art and the process of bringing this book to publication follow this link to an interview at Seven Impossible Things Before Breakfast.
Posted by Xena's Mom at 7:40 AM