Whatever form it may take, there is nothing good about the word slavery; conjuring visions of horror in a person's mind when it is read or heard.  Thinking of one human stripping another of their basic freedoms; forcing them to live under the absolute control of another is unthinkable.  More than three thousand years ago, people numbering in the hundreds of thousands were freed from the bonds of slavery by a series of unprecedented events. 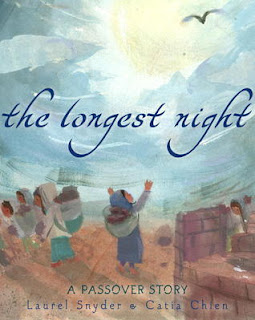 The deliverance of the Israelites from their oppression under the Pharaoh's rule in Egypt is observed by the Jewish people each year during Passover.  Last week during the #SharpSchu book club hosted on Twitter, books written by Laurel Snyder were the topic of discussion.  Her new picture book The Longest Night: A Passover Story (Schwartz & Wade Books) with illustrations by Catia Chien was part of the hour's conversation.  At one point Laurel Snyder said of this title, Jewish books are something I feel strongly about. I do them when I find what feels like a "hole" in canon.

Every morning with the light...
Came another day like night.

In the heat and blowing sand,
Each gray dawn my work began...

Through the narrative of a young girl, not privy to the workings of the adult world nor the conversations between Moses and Pharaoh, we readers get an intimate, immediate sense of the conditions in which the Hebrew people lived, especially the children.   It is a world of unspeakable hardship and toil; laughter, running and play were absent.  Wondering about freedom, however, was very much present.

One day everything changed.  With the intuition of a child she could sense it in her mother's voice. The water in the rivers and streams turned to blood.  The first of ten plagues had visited the land.

As each of the remaining nine plagues struck Egypt and the Egyptians, we experience it as she did; trying to catch one of the frogs, seeing those who caused her misery, miserable from the air filled with fleas, lying fearful in bed as beasts roamed the streets, watching as the cattle, lambs and goats sickened and died, wondering as an illness struck the masters too, comforting her sister as fiery hail fell, noticing her father whittle as locusts swarmed, sitting safe in her home filled with light as darkness stayed for days---the longest night.

When a lamb is killed, its blood is smeared above the door by her father.  This is new to her as are the piercing cries of grief filling the air that awakened them later.  Quickly now her family joined all the other slaves, fled the land, crossed the sand, until they reached the sea.  She and the others raced between the parted waters, hearts pounding as the other side is reached.  Oh the joy of freedom.  Oh the joy...

Laurel Snyder using rhyming couplets for nearly the entire narrative gives readers a truer emotional sense of being a Jewish slave girl during these significant events.  We are keenly aware of her physical surroundings, her family and her observations.  There is an underlying sense, despite the horrific plagues and true fear on the part of the girl and her sister, of peace and protection for her people; a strength shown by her mother continuing to sing and her father whittling.  As the plagues worsen an urgency builds in the telling until it bursts forth in the flight, the sea pulling back to create a pathway and in the unrestrained happiness these people feel knowing their escape, their freedom, is real.

This couplet is particularly telling.

How I danced along the shore,
Never having danced before!

When opening the jacket and cover we see images from the book; the girl wondering about the freedom of a dove on the front and on the back the family in flight with four lines from the story beneath.  The opening endpapers depict the shades of a darkened sky, the slavery of the people, but the closing endpapers picture a light, bright new day signifying the freedom of the Jewish people from the Pharaoh of Egypt.  A small square framed by white space appears under the title on that page, happy young girls hands clasped.

Rendered in acrylics by Catia Chien the illustrations alternate between two pages or a full page with a smaller inset on the opposite side.  Her color palette and image perspectives evoke as much emotion as the text within the context of the setting; we feel the dust and heat of the desert, we sense the desperation and pain of the slaves and the terror of the plagues; frogs jumping out of the pages, a close-up of the wolf face, the loss of the animals' lives spread over a gray bleakness or the small home, a single light burning, as it is enveloped in darkness.  The final illustration, hues of red, rose, bathing the landscape and people, a favorite, is as jubilant and glorious as the words written.

In preparation for this review I did read other books written for children about the celebration of Passover but none compare to The Longest Night: A Passover Story written by Laurel Snyder with illustrations by Catia Chien.  Laurel Snyder has given us her heart's desire; a title depicting how a Jewish child would feel before and during the Exodus.  In her Author's Note, at the book's beginning, she offers an explanation for this writing along with the definitions of a few words readers might not know.

Another comment made during the #SharpSchu book club chat to John Schumacher aka Mr. Schu was this, Explaining Passover is hard.  This was why I wanted to do the book so much.  Pictures can accomplish what words can't.  Yes, but these words are so lovely they make pictures in your mind.  I know, I've read this book again and again silently and aloud.  Please follow this link to an interview at Watch. Connect. Read. with Laurel Snyder as well as this link to an interview at Publishers Weekly.

Note:  Received a tweet today in my feed from Laurel Snyder about an interview at The Revealer.  This is an excellent audio conversation; her voice depicting her passion for this title and other topics of importance to her.
Posted by Xena's Mom at 6:09 AM