The Force Was With Us!

For nearly ninety weeks the virtues of Twitter have been extolled through the Saturday posts titled Twitterville Talk on this blog.  Twitter is a source of collective wisdom, inspiration, shared experiences and unconditional support.  Of the educators, publishing people, authors and illustrators who are followers and who I am following, there is a spirit of incredible generosity.

This was never more apparent than this past Monday morning when I saw this tweet.

Free SCHOOL Skype Visit Tomorrow? Due to a mix-up there is a free Skype slot open tomorrow at 10:30 AM EASTERN time. Let me know ASAP!
— OrigamiYoda (@OrigamiYoda) February 4, 2013


After a moment of stunned disbelief the following exchange took place.

I quickly contacted one of my fifth grade teacher colleagues. Before I knew it, a dream was on it's way to becoming a reality.

@loveofxena Excellent! Send me an email and I'll send you the details... tom (at) origamiyoda.com
— OrigamiYoda (@OrigamiYoda) February 4, 2013


As a fan of Horton Halfpott: Or, The Fiendish Mystery of Smugwick Manor; or, The Loosening of M'Lady Luggertuck's Corset, Fake Mustache: Or, How Jodie O'Rodeo and Her Wonder Horse (and Some Nerdy Kid) Saved the U. S. Presidential Election from a Mad Genius Criminal Mastermind, The Strange Case of Origami Yoda, Darth Paper Strikes Back: An Origami Yoda Book and The Secret of the Fortune Wookie: An Origami Yoda Book I was beside myself with joyful anticipation.  There is a reason authors and illustrators are called "rock stars" by educators. We've seen first hand the effect their books have on our readers.

As another sign of the huge hearts of many authors and illustrators, Tom Angleberger agreed to Skype with the entire fifth grade rather than a single class.  All three classes filed into the library and sat waiting for the connection.  What Angleberger did not know was all the students were wearing fake mustaches (so were one of the teachers and myself).

When he looked out at his audience and saw a sea of black paper mustaches he immediately tried to conjure up one for himself.  At this point the energy in the room was high and full of happiness.  Tom Angleberger then produced a parade of origami Star Wars figures to the delight of our students.

He held up examples of his books that had been published in other countries asking students which of them they had read.  (He tricked us once, which we laughed about along with him.) He then spoke about the process behind the writing of Fake Moustache and The Strange Case of Origami Yoda.  Our students hung on his every word.

Inviting students to come forward and ask him questions revealed the true spirit of Tom Angleberger.  Through his humorous and truthful responses he put every single student at ease.  For the moments they were speaking with him, he focused on them completely.  It was heartwarming to watch this best-selling author speaking to our students as if they were good friends.  As an educator these are the times you treasure.

Due to technical difficulties we were unable to complete the visit with each student making Origami Yoda but Tom Angleberger did message us with the final words of May the Force Be with You.  Trust me Tom, it was.  It was you.


Here are some of the comments from students about the Skype visit.

I thought the Skype visit with Mr. Angleberger was extraordinary.  I really loved when I got to go up there to the camera and he called me Larry.  Then some other kids went up there and he called them Larry too.  It was hilarious.   Maggie

First I love your BOOK and I would read it a million times.  Caeden

I am going to try to start the Fake Mustache.  That was one of my favorite video chats we have done this year and will probably always be.  Abby S

I'm guessing he really liked when we all had mustaches.  Catherine

I liked when he showed us the origami Star Wars figures.  Robin

It was great!  Tom Angleberger is a really nice person and has a good imagination.  Logan 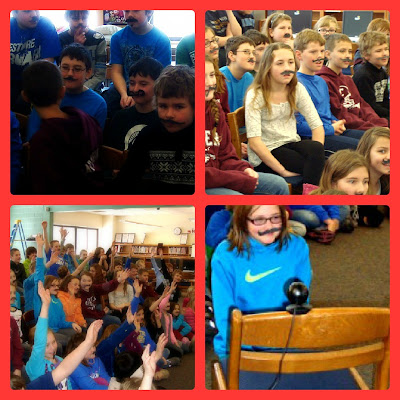 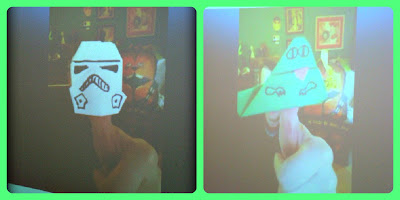 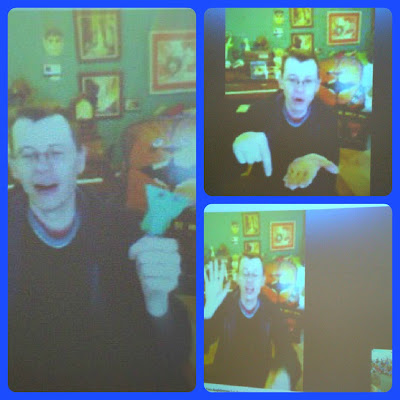 This was a morning which will remain in the memories of our students, their teachers and myself for a long time.  Tom Angleberger is as full of life, fun, and a keen sense of adventure as his books.  We all are grateful for his generosity.  The link embedded in his name above takes you to his website which, not surprisingly, is a world of wonder for his fans.

Enjoy the book trailers and origami instructions below.