What I remember of significant events in American history, being taught in my classrooms growing up, are a few dedicated paragraphs, names of important individuals and the accompanying dates.  It was through the reading of historical fiction, my father's favorite, that my attraction to American history grew.  The expanded, personal perspectives offered by this genre made it come alive; no longer a series of dry lists of events, persons and dates. 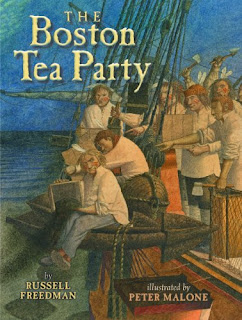 One individual author who consistently creates the same lure of historical fiction in his writing of nonfiction is Russell Freedman.  Freedman's 1988 Newbery Medal book, Lincoln: A Photobiography and his Newbery Honor in 1994 for Eleanor Roosevelt: A Life of Discovery altered what I knew to be true about both these individuals.  Through impeccable documentation he brings the past into the present giving readers a sense of reliving alongside the participants.  A new entry in the Russell Freedman Library of American History, The Boston Tea Party (Holiday House, August 1, 2012), with illustrations by Peter Malone, increases the reader's perception of the circumstances prior to and after the night's activities nearly 240 years ago.

Everyone knew there was going to be trouble when the merchant ship Dartmouth, carrying 114 chests of fine blended tea, sailed into Boston Harbor on November 28, 1773.

Within twenty-four hours of the ship's arrival thousands of colonists had gathered in protest, eventually meeting in the large Old South Church to voice their concerns.  Those gathered voted to not allow the delivery of the tea; no taxes should be paid when they had no voice in Parliament.  Governor Hutchinson, knowing his loyalties to be with the King, demanded the tea be unloaded.

Before that happened two more tea ships arrived, the Eleanor and the Beaver.  The governor ordered British war vessels to block the exit of those three until the tea was delivered and the tax paid.  With tensions rising and the twenty-day due date on the Dartmouth nearing, the people needed to take action.

Another meeting was called; so many people arriving they spilled out into the streets, the Old South Church packed to capacity.  Again the Governor would not honor their requests.  Sam Adams, a commanding member of the Sons of Liberty spoke and was answered from the back with shouts and phrases promising deeds of daring.

Freedman continues his description of the evening of December 16, 1773 in a compelling, narrative including more intimate details, remembrances of those involved; a schoolboy holding a lantern so men could disguise their faces with paint resembling the Mohawk Indians, another describing the reasoning behind the disguises and a rope maker's apprentice locked in his room who made his escape by constructing a rope from his bedding so he could participate.  A mate on the Dartmouth documented the crowd's arrival in the ship's log.  By the use of lanterns and torches as light as day the protesters emptied all the ships of their tea and only the tea.

He continues his conversation with his readers with further inside information; the use of shovels to spread the tea at low tide, the sweeping of the ship's decks when they were done, and the relative quiet which pervaded the night's accomplishments.  You can almost hear the whispered talking as the men made their way home moving through the night knowing the implications of their Boston Tea Party.  Freedman's ability to include the smallest incident with historical importance is what breaths life into his visions of the past; truth triumphs.

Here is a single passage from this title as an example of his writing style.

It was just before six o'clock.  Night has fallen.  The rain had stopped.  A thin young moon was rising over Boston.  A bunch of men disguised as Mohawk Indians, carry axes and hatchets, were hurrying down Milk Street toward the harbor, heading for Griffin's Wharf where the three tea ships were anchored.


Using two pages for all of his illustrations, Peter Malone elevates the text with his realistic, rich watercolor paintings.  A sense of the past is generated with the color palette and muted tones.  One can only imagine the amount of research needed to recreate colonial America; the details on the buildings, exterior and interior, the streets, the harbor and the ships.

By altering his layout we are either given an observer's view, a bird's eye view or a participant's view of the days during this time period.  The emotional mood is as carefully portrayed on individual faces as is the clothing of each person regardless of their station in life.  Freedman's words may make us feel like we are walking with the people in the past, but Malone's paintings bring the past into our presence.


An attractive portrayal in words and pictures invites readers to participate in The Boston Tea Party written by Russell Freedman illustrated by Peter Malone.  A two page introduction precedes the body of the book followed by a map of the town of Boston, an afterword, bibliography, comments about the importance of tea to the colonists, a timeline, source notes and an index.  Holiday House has provided a three page teaching guide linked here.  An earlier title in this series is Lafayette and the American Revolution.
Posted by Xena's Mom at 6:25 AM