For The Very First Time...

People, no matter their age, feel an attraction to, sometimes even the need to protect, baby animals. (Maybe not mosquitoes but you know what I mean.)  It's a frequent sight in my community surrounded by lakes for traffic to stop for a line of new "quackers" trailing behind mama, reminiscent of Robert McCloskey's Make Way for Ducklings. In the morning or early evening it's not uncommon, looking out the back windows of the library at the elementary school, to see deer including fawns in the spring.  If this happens during classes, twenty plus faces, noses pressed against the glass, will be oohing and aahing. 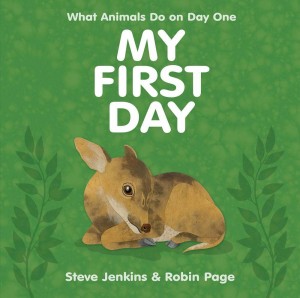 I was moved to tears when present at the birth of puppies; a marvelous miracle to watch.  For those without access to these events Steve Jenkins and his wife, Robin Page have collaborated in a new book, My First Day (Houghton Mifflin Books for Children).  Within thirty-two pages readers are introduced to twenty-two newborns.


What did you do on your first day---the day you were born?

As the introduction reveals, animals may be completely helpless, in need of some assistance or on their own as soon as they are born.  We start in New Zealand with the the kiwi, who after breaking forth from an egg, is ready for the world.  Traveling to the Russian Far East, we discover Siberian tigers are born with their eyes closed, dependent on their mothers.  With a habitat ranging over North America wood ducks climb out of the nest, jump from unbelievable heights to walk and swim right away.

From Africa to Antarctica to the North Pacific to oceans throughout the world, on to South America, then to Australia, and stopping over in the Arctic regions, we visit to find the first day facts of the known and not-so-well known animals on our planet. Readers are probably familiar with giraffes, emperor penguins, sea otters, zebras and polar bears.  How many have heard of a blue wildebeest, a sifaka, a Mexican free-tailed bat, a megapode or Darwin's frog?

You can't help but be intrigued by knowing a mother zebra memorizes the stripes on her baby to find them in a herd of thousands or by the baby megapode born in a huge pile of leaves who can walk, run and fly once they find their way out.  It's interesting to note other stand-out features of the animals selected for this title; the kiwi lays one, and only one, huge egg, the Siberian tiger is the largest living big cat in the world, sea otters are the smallest marine mammal in the world, and the leatherback sea turtle is the biggest on our planet.  These facts are not all mentioned in this title but when nonfiction is well presented, as this is, it invites further investigation.

The intended audience will feel a kinship with each creature as they speak in their own voice.  The array of first day experiences are as different or similar as the animals themselves.


Winning a Caldecott Honor Award in 2004 for What Do You Do With a Tail Like This? brought further attention to the notable torn and cut-paper collage used by Jenkins for his illustrations.  On the jacket and cover, mirror images of one another, readers see a baby muntjac nestled among leaves hoping to remain undetected.  The back asks the question, What did you do on your first day?, words above and beneath an adult and baby Darwin's frog (green on rusty red). Plain sky blue endpapers open and close the body of the book.

Each animal is given a different colored background, setting, highlighting their physical characteristics.  The details, eyelashes, reflections in the eyes, feathers, fur, shading on the bodies or surroundings, is astounding in its intricacy and accuracy.  As in other titles the text placement within the pictures is like concrete poetry imitating the actions depicted by the words.


As an introduction to animals in our world, My First Day written and illustrated by Steve Jenkins and Robin Page is highly informative and engaging in the best possible way, stunning visuals and the kind of facts children (of all ages) will want to know.  As a one-on-one or as a class read aloud I can think of no better new title in this subject area.  More facts, small paragraphs with thumbnail illustrations, about each of the animals are included at the end.

For further study of the animal kingdom head over to ARKive reviewed here on the blog or the kids section of the National Geographic web site.

For additional information on the work of Steve Jenkins there are several videos and slideshows at Teaching Books.net.  Here is an earlier interview of Jenkins at Seven Impossible Things Before Breakfast.  This is a link to Steve Jenkins Science Is Fun! A cross-curricular guide to books by Steve Jenkins developed by the publisher.
Posted by Xena's Mom at 6:46 AM