More than twenty years ago my nephew decided he wanted to collect comic books along with the cards.  I was his willing co-conspirator in this endeavor, not having been able to do this when I was his age.  We haunted comic and card shops, saving all our spare money to spend on the next, or elusive, issue or card needed to complete a set.  It was one of the best times of my life lasting for more than a decade.  My favorite titles were those featuring Batman, fueled by the 1989 film directed by Tim Burton with Michael Keaton in the starring role. 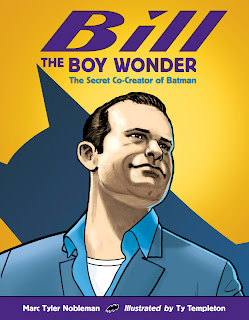 Without a doubt all the mythology books I read growing up contributed to my love of superheroes.  But the thing I found, and still find, intriguing about Batman is he has no superpowers.  He is a regular but extraordinary person able to accomplish amazing things. In that respect he is much like his co-creator, Bill Finger.  Without reading Bill the Boy Wonder: The Secret Co-Creator of Batman (Charlesbridge Publishing, July 2012) written by Marc Tyler Nobleman with graphics by Ty Templeton I would not know this to be true.

After Milton Finger graduated from high school he invented his first secret identity.

At that time, 1933, if you were thought to be Jewish, you might not get a job, so Milton became Bill.  Bill dreamed of becoming a writer.  His parents wanted him to pursue a career in medicine.  Selling shoes was where he started; the year was 1939.

Around this time, Bill met a cartoonist, Bob Kane.  After hearing Bill's story ideas Bob knew this young man's talents were, yes, extraordinary.  Initially they collaborated on some minor stories.  Superman had become a huge hit and an editor wanted another superhero from Bob Kane.  And Bob Kane knew just the man to make this come true.

Bill Finger created the costume, the lack of superpowers, and in time, foes and the backstory; many of the details we have come to know about Batman.  Between the editor and Kane and Finger a deal was made but Vin Sullivan did not know about Bill Finger being the writer nor did anyone else.  Steady work was scarce after the Great Depression, so Bill agreed to this secret.

Some secrets cannot be kept; other editors eventually discovered Bill was doing the writing.  They gave him his assignments now.  But the readers still did not know until 1964 when an editor, Julius Schwartz leaked it to the outside.

From there a particular fan, Jerry Bails, did his own sleuthing not only revealing Bill Finger as the writer but also as the co-creator.  In 1974 when Bill Finger died he did so without any official recognition as co-creator.  Jerry Robinson, one of the earliest artists working on Batman, championed for what today is known as the Bill Finger Awards for Excellence in Comic Book Writing.

Bill's personal writing techniques, a gimmick book, attaching pictures to his scripts for the illustrators and having his son, Fred, read over scripts are only a few of the insider glimpses Marc Tyler Nobleman includes in this enlightening biography.  His pursuit of the truth, unfolded for readers like a detective story, piece by piece, urges readers to turn the pages as quickly as possible, then go back and read it all over again, much slower marveling how this story came into being.  Nobleman's informative writing contains exactly the kind of specifics to completely involve the reader in this man's life story.  He uses specific words having reader appeal:  wowed, hightailed it, scrawled, or saddle a superhero.  He notes at the book's end:

The wordplay with bill, finger, and bat in this book is a homage:  Bill was known to use puns in his Batman stories.

An example of the wordplay is:

As for who was the man for the job, he put his Finger on it right away.

The use of the silhouette of Batman's outline on the cover, continues on the endpapers done in black with gray, white and yellow for text; mainly notable quotes.  In the style of comics Ty Templeton varies his illustrations in size, including panels of different shapes and sizes within his pages framed in black.  The narrative, black text on white, is framed in black too, amid the full color visuals.

Inked, then colored in Photoshop, the careful, detailed illustrations by Templeton evoke a true sense of the time period and the people involved in Bill Finger's life; signs on buildings, architecture, interior design, clothing, the comics and comic characters.  Emotion and motion are easily understood.  While I have several favorite layouts, the final two pages top the list, Batman spread across both, Bill Finger, head and shoulders prominently displayed in front.

Bill the Boy Wonder: The Secret Co-Creator of Batman by Marc Tyler Nobleman with illustrations by Ty Templeton is the kind of picture book biography so engrossing it will have readers humming the theme song to Batman expecting to see the signal light in front of them at any minute.  A six page author's note documents the process used by Nobleman to track down the truth presented in this title.  It is followed by more notes and a selected bibliography with an invitation to visit the publisher's website (linked here) for a more complete listing.  This site also includes a guide for educators.

A link to Marc Tyler Nobleman's website is embedded above in this name.  He also wrote a guest post at John Schumacher's, blog Watch. Connect. Read. as well as the Nerdy Book Club.  Follow this link to Nobleman's interview at NPR's All Things Considered---Batman's Biggest Secret (No, It's Not Bruce Wayne)

This is the book trailer.

This is a video of Marc Tyler Nobleman's TED talk.