To Catch Your Eye

Rarely when we are living life do we pause enough to think about the importance of  connections made based upon choices; choices made personally or those thrust upon us.  Of the picture book biographies I've read of late, the value of choosing to pursue one's passion regardless of any obstacles has been increasingly apparent.  You have to ask yourself how you would cope with life's detours big and small (some which were handed to them at birth) faced by the people whose life stories are being told. 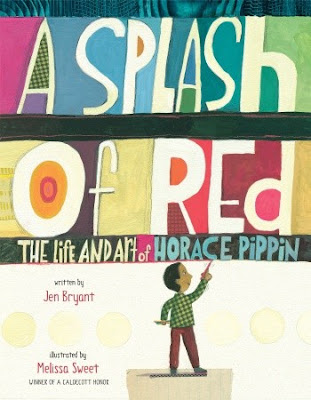 Then too, I continue to be amazed by the knowledge presented within the pages of this form of children's literature; the power not only to inform but to spark further learning is undeniable.  I have met people I never knew before as well as having my understanding of others strengthened.  Author Jen Bryant and Caldecott Honor-winning illustrator Melissa Sweet (A River of Words: The Story of William Carlos Williams, Eerdmans Books for Young Readers, 2008) have collaborated again in the brilliant biography, A Splash of Red: The Life and Art of Horace Pippin (Alfred A. Knopf, January 2013).


On February 22, 1888, the town of West Chester, Pennsylvania, celebrated a holiday.  That day, in that same town, Daniel and Christine Pippin celebrated the birth of their son, Horace.

Early on it was obvious Horace would grow to be a big man; being long of leg and having large hands.  He used his size and strength to help as much as he could with the work involved in raising a growing family.  In the evenings, chores done, he would gather paper and charcoal, recreating his world.

Horace found he loved to draw and people wanted him to draw for them; whether at school, later when earning money to support his family or in the trenches during World War I.  It wasn't just his family or friends who appreciated his drawing.  Before he left school in the eighth grade. he entered and won a contest for his artwork; the prize was two brushes, a box of paints and colored pencils.

As a result of being shot by a sniper when Horace returned home from serving in the war the use of his right arm was not the same.  He could no longer draw. Despite marriage and community service filling his time, the desire to make pictures was so strong one day...a red-hot fire place poker became his brush and a piece of wood became his canvas.

Because Horace chose to overcome his disability, because he chose to painstaking paint a picture over the course of three years, because he chose to display his work in a shoe store in town, someone noticed.  They chose to tell a famous painter.  More than his splash of red would now be displayed for all to see, then and now.


One thing readers notice about the writing of Jen Bryant in this title is her nearly poetic narrative.  Based upon careful research she weaves the true words of his life (quotations of Pippin) with warmth and intimacy into the span of years from 1888, his birth until he and his art became famous.  Her passion for bringing his story to a new audience is evident on every page.  Here is a single excerpt.

As he walked along the streets of West Chester, his fingers itched to draw all the colors and textures he saw:
lacy curtains billowing in the windows,
a splash of red geraniums blooming on a step,
a yellow cat sprinting down an alley,
deep green vines spiraling up a wall.


Using a blend of watercolor, gouache and mixed media Melissa Sweet dedicates this title by saying:

To Jen, whose words make pictures in my mind.

Her matching jacket and cover open to display Horace's winning box of paints on the back with one of his quotes beneath:

Pictures just come to my mind and I tell my heart to go ahead.

The opening endpapers, against a mixture of cream textures, highlight another of his quotes and the tools of his art, brush, pencil, color palette.  The closing endpapers are a stylized map of the United States, red stars marking where Pippin's work can be seen.  Four miniature originals are shown, too.

The merging of colors and textures coupled with a varied layout and design replete with meticulous detail are stunning in their recreation of Horace Pippin's life.  Looking through the windows in the two homes shown is nearly three-dimensional.  Hand lettering the quotations incorporates them seamlessly into each illustration.  In her author's note Jen Bryant remarks about a male cardinal appearing when she visits Horace Pippin's grave.  Careful readers will see the placement of red cardinals within this book by the hand of Melissa Sweet.


It is pure pleasure to read a picture book biography as beautiful as A Splash of Red: The Life and Art of Horace Pippin; text and pictures meshing together as if Mother Nature herself had a hand in it.  In the author's note, illustrator's note and an interview here, Bryant and Sweet discuss how they did extensive research together which is not usual.  This link is to a website dedicated to the book including a video about his work narrated by a child.  Random House has provided a Discussion Guide linked here.  The links embedded in Bryant's and Sweet's names are to their individual websites.
Posted by Xena's Mom at 7:00 AM