Recently, over the course of many days I've been on a journey from the bottom of the world to the top and back.  Places with names like Rio Grande, Tierra del Fuego, Argentina, Lagoa do Peixe National Park, Brazil, Delaware Bay, United States, Southampton Island, Canada, Mingan Archipelago, Quebec and Maranhao, Brazil, have been some of the stops on my itinerary.  For part of the trip I've gone nearly five thousand miles without rest, food or water in all kinds of weather.  And...I've done this all from the comfort of my own home. 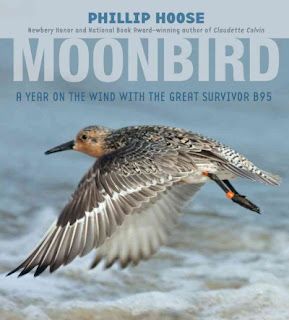 When reading Moonbird: A Year On The Wind With The Great Survivor B95 (Farrar Straus Giroux) written by Phillip Hoose I became, for more than 120 pages, intimately involved in a world within the world at large.  One particular bird, a red knot, who uses those geographical points as stepping-stones in his yearly voyage completely captivated my attention, as beat by beat of heart and wing I've been with him.  Rarely has filling my book gap challenge been so emotionally moving.

Meet B95, one of the world's premier athletes.  Weighing a mere four ounces, he's flown more than 325,000 miles in his life---the distance to the moon and nearly half way back.

On February 20, 1995 a team of scientists working in Argentina banded about 850 red knots.  Six years later one of them, the only survivor identified to date by black bands, was captured again.  He was given another band, a tiny orange flag, bearing B95.  When I turned to page 22 and read the account of his capture again in 2007, even with my limited knowledge, I found myself completely attached to this miracle of bone, muscle and feathers.

In the subsequent seven chapters (as in the first one) each are started with a relevant quote, followed by meticulously detailed but compelling documentation of all the stops along B95's flight for a given year.  We are privy to his physical changes, his flight patterns, the challenges faced in his diminishing food supplies, and how he protects himself from potential enemies. We follow he and his companions to their Arctic destination, the breeding grounds where growth and habitats of these astonishing winged wonders are related to us.

Between each chapter, which additionally informs us of the drastic decline in red knot population and possible causes, the precarious numbers of horseshoe crabs whose eggs B95 needs to survive, how to band birds and note statistics with care and caution, the explanation of a bellwether site (the first indicator of trends), geolocators and the long flight back to the south, readers are introduced to notable persons who have dedicated their lives to red knots.  We meet Clive Minton, Patricia Gonzalez, Brian Harrington, Amanda Dey, Guy Morrison and Ken Ross, and young Mike Hudson.


Phillip Hoose's writing style is informative, passionate and filled with personal details.  His descriptions of place and time bring us to those exact moments.  He endeavors and succeeds in bringing understanding of his subject to his reading audience.  Here are a few excerpts from this title:

But there was more to it than that. "He was alive," remembers Gonzalez, her voice catching in the telling.  "Still alive."...The bird remained calm in Gonzalez's grasp, even though her hands were trembling as she worked.  "I kept talking to him," she remembers.  "I kept saying, 'Forgive me, please, I won't hurt you.  I will release you soon.'  The heat of his tiny body was warming my hands and his heart was beating so fast.  As I was working, I kept wondering, 'How can such a fragile thing be so powerful?' "

Tonight, as the wind rises, B95 stands on one leg in the shallow lagoon, surrounded closely by his flock mates.  He tucks his bill under a wing, but he doesn't drop his guard.  B95 sleeps with one eye open.  So do the others.  A roosting flock of knots is like a single organism equipped with hundreds of eyes and ears.

If B95's birth year was typical, his parents had little to eat during their first few days in northern Canada.  Deep snow still banked against cobblestone ridges and blanketed much of the land, though bare patches of earth appeared and widened under the melting heat of the sun that hung low in the sky almost all day long.


Stunning full color photographs (most with explanatory phrases), captioned maps, added framed, featured topics, and diagrams are prevalent throughout this volume.  An extensive appendix, source notes (chapter by chapter), bibliography (books, articles, scientific papers, Internet and multimedia resources), acknowledgments, picture credits and an index are included in the back.  A list of Hoose's previous books and contents precede his narrative.


As evidenced by its numerous awards (The Robert F. Siebert Informational Book Medal Honor 2013) this year (follow the link to Phillip Hoose's website embedded in his name above) Moonbird: A Year On The Wind With The Great Survivor B95 is a stunning work of nonfiction.  All readers will become acutely aware of the important role each specie plays in the workings of our ecosystem.  We need them and they need us to be stewards of this planet.

Please go to Phillip Hoose's website to read and listen to many resources relative to this work.