Walking through rows of pines, perhaps planted during the days of the Civilian Conservation Corps, in any season is one of my favorite hikes to take, not only for the gentle whispering among those quiet sentinels but for the possibility of finding the perfect pinecone.  Leftover from years of making wreaths, a craft started in scouting, is the treasure hunter's eye, seeking unique shapes and sizes.  Tucked away too, in my storyteller's mind, is the tale of the woman gathering pinecones to sell as fuel, raising money for food for her family.  I am wondering if the elusive man from legend will turn one of my finds into silver as he did hers. 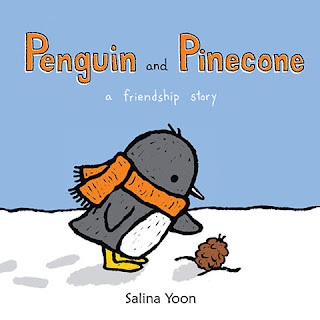 When you unexpectedly discover something for which you've been searching, the joy in the moment is swift and overwhelming, flooding all your senses.  Coming upon something new, something you've never seen before, triggers a different response, one loaded with questions.  In Penguin and Pinecone: a friendship story (Walker & Company, October 2, 2012) written and illustrated by Salina Yoon the questions asked and answered lead to surprising but truly touching results.

One day, Penguin found a curious object.
What's this?

Nestled in the snow is a single pine cone.  After a series of trials and errors, Penguin knows it is not a snowball, food or an egg.  What he does discover is this object is cold.

Immediately the reader can see into the heart of Penguin.  Knowing his new found treasure is chilly he knits him  a scarf; a scarf the same as his.  Now they can romp, roll and frolic until... it sneezes.

Grandpa explains to Penguin, Pinecone will never realize his potential in their frozen home.  Many, many miles away is where Pinecone needs to be.  As much as he loves his companionship, Penguin knows he needs to get his friend to the forest.

Sled packed, pulling through swift winds and swirling snow, Penguin holds tight to his pal, determination in his every step.  With the forest found, a needle nest on the ground, Penguin leaves the warm day and his best bud.  Time passes but the memory of the love between the two does not fade.

With an overwhelming desire to know how his friend has fared, Penguin treks toward the warmer clime.  Love, once planted, knows not of endings only beginnings.  It has plans of it's own.


Given that pinecones and penguins are found in opposite parts of the world, Salina Yoon takes the improbable, mixes in a little magic, and forms an enduring relationship which not only thrives but multiplies.  Her simple sentences using the right words invite even the earliest readers to be participants.  But least you think the spare text implies a simple story, the ending is wise and wonderful.


How can you not become attached to a penguin as cute as the one on the cover with his roly-poly dimensions, sporting the orange scarf to ward off the chill?  Opening and closing endpapers, white, feature small pinecones scattered across the pages.  The title page highlights an illustration from within the story, Penguin lying on pine needles in the shape of a heart.

Heavy black outlines make the pictures pop against the simple, cool white and blue backgrounds when in the frozen south and against the pale yellows, greens and browns of the northern forest.  By alternating the size of the visuals, across two pages, a single page, several smaller ones on a page, zooming in and out and some framed with the black line, Yoon controls pacing, enhances her narrative and reaches out to readers, tying them emotionally to the story.  One example is the two pages picturing the words:

"Good-bye, Pinecone.  You will always be in my heart.

Yoon has the reader looking down on the scene of Pinecone resting in the bed of pine needles surrounded by rocks in the shape of a heart.  Above the heart three sticks form the letter "I", beneath it small twigs form the letter "U".  Penguin looks on holding his scarf. 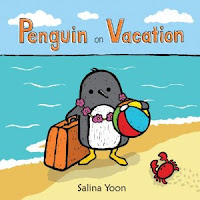 The link embedded in Salina Yoon's name is to her website.  For further unlikely adventures follow the link to Penguin's blog (adorable) enbedded in the title above.  And for making a pinecone penguin go to this link.  Penguin will be having further adventures in a new title, Penguin on Vacation.  Have fun!