When looking at all the deep snow surrounding my home now, I can feel my spirit soar thinking, thanks to Wilson "Snowflake" Bentley, there are no two snowflakes alike.  This diversity, not just in snowflakes, spreading over our entire world, is what gives us much rich beauty to enjoy.  Perhaps that's why people pause to watch a sunrise or sunset, a flock of geese or breezes ruffle leaves on a tree, it's never quite the same from time to time. 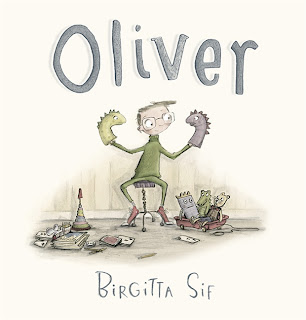 With people, each unique characteristic combined to make a whole, a whole not quite the same as any other, is what, in my opinion, makes life so interesting.  For some though, even if you've been raised in a home which encourages and embraces individuality, being distinct is not always comfortable.  Debut author/illustrator Birgitta Sif has created a heartwarming exploration of being different in her book, Oliver (Candlewick Press).

Feeling different to Oliver meant he could live in worlds of his own design.  He could include his puppets and stuffed animal pals.  Their amazing feats in places all over the world were legendary; camel-riding treasure hunters, ocean-jumping shark fighters or waterfall sliders.

Still Oliver knew there were times he had to do things alone.  Other times he and his friends preferred to be anywhere but where they were.  Playing his piano one evening to an empty room, except for his inanimate buddies, the weight of his difference settled and surrounded him with a heaviness.

Chasing a errant tennis ball the next day, friends in tow and racket in hand, lead to another exciting escapade.  Oliver discovered on this trek into the unknown a reality better than he had ever imagined.  Sometimes the best adventure has been there all along, if you knew where to look.

Readers will quickly feel at the very least empathy for, if not a kindred spirit in, Oliver.  Simple, single sentences, one per page turn, with one notable exception, are placed amid Sif's illustrations.  Her word choices provide the perfect canvas for her pictures which are an open invitation to readers.

Both the matching front and back jacket and cover acquaint readers with Oliver's gifted use of imagination.  Opening and closing endpapers feature an eclectic mix of green-toned funky framed pictures.  Birgitta Sif rendered her visuals in pencil with digital coloring in muted tones, evoking a softness to this tender tale.

Oliver's world is spread before readers in exceptional detail with every stroke of Sif's pencil.  Close inspection reveals the work of an observer of the world; cats in a basket on the back of a bike eyeing the mouse being pulled in the wagon behind, a skater tangled in a dog leash as his canine companion sees another dog coming down the street or a car waiting for a mother hen and chicks to cross the road.  Readers will be looking for that mouse to appear in all the pictures throughout.

It's the eyes on her characters (even the toys or on people's sweaters) with their expressive openness that add warmth and liveliness to her illustrations.  Upon completion of the story readers will want to go back to see what they and Oliver have missed.  I know I did...again and again.

It's hard to believe Birgitta Sif is a debut author/illustrator as Oliver is a beautiful blend of narrative and pictures.  Her story of young Oliver will resonate with a range of readers of all ages. It's a book meant to be shared.

Please follow the link to Birgitta Sif's website embedded in her name above.  There are more pictures there from this book.  Below is her video about the making of Oliver.