There is nothing better than sharing a fit of giggles with children.  When a particular line in a story strikes them (and you) as funny, their peals of laughter bursting forth are riches beyond measure.  Other times when an illustration extends, enhances or adds something new to the narrative, there will be a pin-drop-silent pause, glances will be exchanged, then like a stadium wave it starts and soon the room is filled with the sounds of hilarity.

Twelve years ago I purchased an audio CD, The Battle of the Mad Scientists and other tales of survival, filled with stories written and told by Bill Harley complete with musical interludes.  Two titles, The Great Sled Race and Mrs. Ammons And The Boys' Room, are perennial favorites.  Harley has a knack for portraying life exactly the way it is for guys and gals, getting to the heart of their feelings, their laughter, tears and fears. 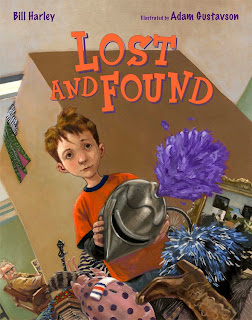 It's this gift of knowing, whether it's their family or friends, the neighborhood nuances or school days, which brings readers into his stories immediately.  His most recent picture book, Lost and Found (Peachtree Publishers), illustrated by Adam Gustavson, is about the location of Lost and Found in a boy's school, a place avoided at all costs by everyone.  Childhood fears, real or imagined, are hard to let go. (How long was it before you let your arms or legs hang over the side of the bed?)

Justin's hat isn't just any hat.  It was handmade by his Grandmother who is coming for a visit on the weekend.  It's a favorite of his; blue and white with stars of orange all around.  It no longer has the red ball on top.

His Mom wants him to look in Lost and Found the minute he gets to school but that's not going to happen.  Students would rather never recover their belongings than go to Lost and Found.  With the help of friends Justin combs the playground, in his desk, under the hamster cage and behind the bookcase in his classroom.  His hat has vanished.

Justin's pals gather around him the next day to brainstorm possibilities but there's only one thing left to do, go to Lost and Found.  Going to Lost and Found means walking down the scary hall near the cafeteria and worst of all, talking to old, grumpy Mr. Rumkowsky, the janitor.  With good luck wishes ringing in his ears, he heads after lunch to what he believes is his doom.

A knock, an invitation to enter and a box so big, Justin needs a ladder to get to the top.  No hat is found on the first day, but items belonging to his friends are.  He's only skimmed the surface.  He'll have to go back.  His bravery lands him other requests for items to locate.

It's not nearly as frightening when he returns the next day.  In fact Mr. Rumkowsky says he can have any of the stuff he pulls out; it's been there so long.  Deeper into the box he goes, still no hat.  But the stuff he keeps, his friends are crazy about all the bizarre items.

On the next day his visit reveals things stranger and stranger.  Pretty soon he's going to reach the bottom.  Where is his hat?

You can't stop time and Friday arrives.  His Grandmother will be with his Mom when she picks him up after school.  What exactly is Justin going to find?  He may surprise his mom, delight his grandmother and old Mr. Rumkowsky...well, he's not the guardian of Lost and Found for nothing.


Bill Harley's skills as an oral teller translate well in his written work.  He establishes a rhythm in his narrative by using the repetition of key phrases in similar situations.  Through his use of dialogue character personalities shine.  As a teller he knows how to interest his audience, surround them with story and manage to surprise them a time or two.


Every single time I read this book I discover some new detail in the realistic, full color oil paintings rendered by Adam Gustavson.  Stark white endpapers feature autumn leaves in motion across the pages, the opening and closing differ in the portion of an object featured on each...foreshadowing?  Gustavson continues to include leaves scattered across his illustrations whenever the characters are outside (even reflected in the car's mirror) as well as on a bulletin board in the hallway inside the school.

The majority of the pictures extend across two pages zooming in to emphasize the character's importance or an object relative to the situation.  Details in every visual invite inspection; objects under the hamster's cage, (has the hamster figured out a way to escape), the large CAUTION on the mop bucket, multiple locks on the janitor's office door, Mr. Rumkowsky's duck-taped desk chair, or the mermaid tattoo on Mr. Rumkowsky's arm.  There is a noticeable warmth to Gustavson's people, in their eyes, mouths, hands and movements.  His portrayal of the inside and outside of the school is so real the feeling you get around a schoolyard or walking down the halls (you know what I mean), it's there.


Childhood fears are faced with unexpected results in Lost and Found written by two-time Grammy Award winning Bill Harley with illustrations painted in oil by Adam Gustavson.  Whether sharing one on one or as a group read aloud, this is a winner.  It is a recipient of the Parents' Choice Approved award under Picture Books for Fall 2012.
Posted by Xena's Mom at 7:32 AM