Put Your Right Heart In

As I've stated here before, in my review of Jake and Lily, if Jerry Spinelli writes them, I read them.  I've laughed out loud during a wrestling match.  I've agonized with a boy dreading his tenth birthday.  I've been the girl who doesn't fit the mold, marching to more than her own drummer, eyes focused on a special star. I've run alongside Maniac and Penn racing for all their worth. 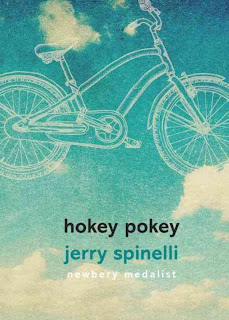 With his newest title Spinelli takes me to a place every reader visits and leaves, never staying.  In Hokey Pokey (Alfred A. Knopf) childhood is described so uniquely readers (myself included) are caught by surprise before being astounded by its brilliance.  In one day the marvelous, fantastical fun of this land is laid before us in all its innocent glory.


All night long Seven Sisters whisper and giggle and then, all together, they rush Orion the Hunter and tickle him, and Orion the Hunter laughs so hard he shakes every star in the sky, not to mention Mooncow, who looses her balance and falls--puh-loop!--into Big Dipper, which tip-tip-tips and dumps Mooncow into Milky Way...

Celestial antics begin the story of Jack as a teeny, tiny remnant of the night lands on his nose whispering it's...time.  He awakens with the belief the world as he knows it, has shifted.  Immediately he realizes his beloved bike, Scramjet, is missing.

Not only has his bike been stolen but it's now in the possession of his worst nightmare, a girl by the name of Jubilee. Sending the mightiest of his Tarzan yells over the land of Hokey Pokey he calls his amigos, LaJo and Dusty.  They quickly mount up and ride to his assistance, united in their determination to reclaim his black and silver stallion, as the day, the quest, the adventure unfolds.

In short chapters Spinelli alternates perspectives between Jack, his friends, Jubilee, a pint-sized bully named Destroyer and brief nods to characters important to Jack's life.  For this is not only a quest but through these chapters we are introduced to a world that never changes, day in and day out it remains the same; a world of dust, a herd of mustang-like bikes, tumbleweed-tossed plains, hills and valleys and places with names like Trucks, Doll Farm, Tantrums, Thousand Puddles, Gorilla Hill or Snuggle Stop.  We meet children of all ages, Newbies, Snotsippers, Gappergums, Sillynillies, Longspitters, Groundhog Chasers, and Big Kids whose lives revolve around all the playful possibilities in Hokey Pokey.  Oh, and one more thing...there are no adults in Hokey Pokey...well, except for the appearance of the Hokey Pokey man at noon every single day, providing each child a snow cone treat of their favorite flavor.

What also becomes readily apparent is this day is not really about reclaiming stolen property, it's about disappearing tattoos, walnut shells that tell stories, a small hut no one can enter, and a track with no train.  Jack's life on this day is topsy-turvy shrouded in mystery; being scared but excited, hanging on but letting go.  No one will admit to the truth of what is happening, whatever that is.  In a final stroke of genius, Spinelli ends the story as it began with whoop and a holler in the starry heavens.


As surely as he is the champion fisherman and we the hungry catch of the day, Jerry Spinelli moves the bait past us, closer and closer each time, until we bite.  He reels us deeper and deeper into the story depths until we are completely hooked. His poetic, descriptive writing, full of nostalgia and true-to-life dialogue, is the irresistible lure.

Dusty cries, "She's coming!"
"Off the trail!" barks LaJo.
They cannot see yet but they can hear:  the chittering chain and axles,
the stone-pocked crunch of rubber, the thief's crazed scream unfurling.
They can feel the speed, feel it accelerate with every wheelturn, feel the
hill snuffle and grin and stiffen its spine, feel the air split like a snapped
stick as into the bow-bend they lean.
"Yeeeeeeeeeeeeeeeeeee---"

Ana Mae goes bananas, apples, kumquats.  She screams, twirls, cartwheels.
This is what Jubilee loves most about bestfriendship:  when something great happens
to one, it happens to both.  She kickstands Hazel and joins the celebration.
They do their special fingermess handslap, their special shimmyshakejive buttbump.
Ana Mae thrusts her arms toward the bike:
"Yellow?"
"Albert did it!"
More howls.  The girls drop to their knees and bow grandly to the bike as if to
a Supreme Sultan of All.


What Jerry Spinelli has given readers in Hokey Pokey is a gift; the gift of going back in splendid remembrance or of seeing their place in life with greater gratitude.  His use of words is an example to readers of all ages of the potential power of creating a sensory vividness within a story.  I think I'll go bike shopping next week.  And when I find the perfect one, I'm naming it Scramjet.

Follow the link embedded in Jerry Spinelli's name above to his website.  This link is to an interview in which he speaks about Hokey Pokey.
Posted by Xena's Mom at 8:06 AM