Through the years we have been entertained by the lovable, laughable antics of dogs in comics and cartoons.  Beginning as early as 1930 Disney's Pluto was the perfect pal for Mickey Mouse.  Near the end of 1950 Snoopy appeared as the loyal friend of Charlie Brown in Charles Schultz's Peanuts becoming quite a prominent character in the series. 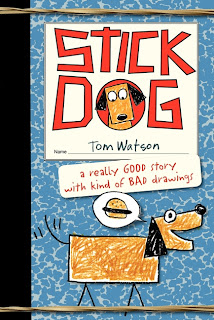 Mystery sleuths Fred, Daphne, Velma and Shaggy have been assisted by the ever loyal Scooby-Doo since 1969.  A fresh face was released into the world on January 8, 2013, Stick Dog: a really good story with kind of bad drawings (Harper) by Tom Watson with illustrations by Ethan Long based on original sketches by Tom Watson.  Readers are in for ten chapters, 189 pages altogether, of head-shaking, eye-rolling, rib-tickling fun.

On the first page, front and center, is a profile of Stick Dog, grinning away, tail wagging.

This is Stick Dog.
He is not called Stick Dog because he
likes sticks.  Although, now that I think
about it, he does likes sticks.  All dogs like
sticks, don't they?  I mean, what kind of
dog doesn't like sticks?

Our narrator begins with an explanation of the main character's name due to his inept drawing abilities which we are to agree not to point out as readers.  No, we cannot scrunch up our faces like his art teacher or make him follow any Good Writing Rules like his English teacher.  Fun is the story's goal here, after all.

Stick Dog has comfy canine quarters complete with an old cushion he dragged into an unused pipe running under a highway.  His pals, equally free on the streets, are a poodle named Poo-Poo, a Dalmatian called, of all things, Stripes, Karen, a dachshund and a mutt named, of course, Mutt.  The fearless five are gathered on a summer day when a delectable aroma drifts toward them from Picasso Park; someone is grilling hamburgers.

With the goal of obtaining the meat attached to that glorious smell firmly fixed in their collective minds, they set off.  It quickly becomes evident that Stick Dog is the brains of the bunch.  His well-intentioned comrades' character traits surface and slow momentum.

Poo-Poo is immediately distracted by the presence of a menacing, nut-throwing squirrel.  Who knew Stripes could run like a speeding train and strike terror in the group with her stories of sword-wielding warriors. With her ever-present need to feed on chips, potato chips, Karen disappears like a Ninja, albeit a very short one.

With the crew finally gathered together again ankle biting, car driving, cliff diving and superhero flying are not what Stick Dog considers good plans.  With the diplomatic skills of an ambassador he steers his friends toward his more sensible idea.  What none of them anticipate is the fulfilling results.

Author Tom Watson has a definite knack for packing page after page with words sure to elicit loads of laughter.  Shifting between the narrator's over-the-top, this-is-the-way-it-is observations and the dog's meandering thoughts, and what can only be imagined as typical dialogue, is seamless.  It takes no stretch of the imagination to believe that the events can and did occur as described which paves the way for absolute hilarity.  Here are a few passages.

"This is great, just great," Poo-Poo moaned.
"Here I have this devious, conniving
chatterbox practically within my grasp, and
I can't finish the job."


"Will it bother you if we bark at mailmen?
I mean, seeing as you used to have a
human mailman of your own?"

Mutt shook his head and smiled.  "Heck, no.
In fact, I used to bark at Gary all the time."

"You did?" Poo-Poo asked, "You barked at
your own human?"

"Umm, yeah.  I'm a dog---and he was a
mailman. What choice did I have?" Mutt
said, clearly regarding this question as
ridiculous.


Designed to mirror the qualities of a composition book complete with the faint lined paper for the text with larger print and wider spacing, the illustrations of Ethan Long fit nicely into almost all the pages.  With a minimum amount of detail he is able to convey the characters' personalities with his practiced skills.  Readers will be hard pressed not to be continually bursting with giggles. (I could not contain myself.)


Destined to be a hit with dog lovers but sure to garner a larger crowd with the hilarious narrative and drawings in this quest-for-food adventure, Stick Dog: a really good story with kind of bad drawings written by Tom Watson with pictures by Ethan Long wins best in show.  As a read aloud it would be great fun.  In fact I can see using this as reader's theater; it's easy to think of possible voices for each of the characters.

HarperCollins Children's offers the first 36 pages for reading along with a game at this link. If you would like to hear the beginning of the audio version follow this link.
Posted by Xena's Mom at 6:43 AM