For anyone who follows this blog it's a given I not only love dogs, especially my chocolate lab, Xena, but I am fascinated with reading and reviewing books about dogs.  I've often thought maybe I should have a separate space for talking about the many fiction and nonfiction titles with canine characters, real or imagined, released for readers each year.  In May 2012 a title was sent out into the world which immediately captured my heart but I wanted to wait, until the right moment presented itself, before posting my thoughts here.

Bright and early yesterday morning, I visited teacher-librarian (and 2011 Library Journal Movers & Shakers) John Schumacher's blog, Watch. Connect. Read.  His post, Video of the Day:  Remembering to be a Child, was a TEDx Beacon Street talk given by the winner of the National Book Award for Young People's Literature, The Penderwicks: A Summer Tale of Four Sisters, Two Rabbits, and A Very Interesting Boy, author Jeanne Birdsall.  I was captivated for every second of the fourteen plus minutes; her soft spoken words weaving a marvelous spell around her listeners.  The right moment had arrived. 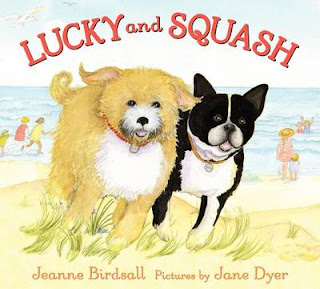 Jeanne Birdsall is the author of Lucky and Squash (Harper) with illustrations by her good friend Jane Dyer.  The title characters are based on two real-life canine companions, Scuppers (Tibetan terrier) who lives with Jane Dyer and Cagney (Boston terrier) who lives with Jeanne Birdsall.  Their friendship since puppyhood is the basis for this fictional story about two dogs who will do anything to spend the rest of their doggy lives as brothers.


Lucky and Squash were next-door neighbors and best friends.

The friendship between the two is limited though, by a locked gate separating their two properties.  Lucky's human is Mr. Bernard and Squash's human is Miss Violet.  Unlike their dogs the people are so shy they've never spoken to each other.  What are the odds of them falling in love and getting married?  The howling of the pup pals is the answer.

With Squash's brains and Lucky's daring they devise a surefire plan, running away to the ocean scattering clues along the way.  Without a doubt when they are found together, Mr. Bernard and Miss Violet will instantly be attracted to one another.  Alas, barely a glance is exchanged and not a word is said.

Hmmm...it's time for scheme two, a visit to the city with another trail of hints.  Hooray, they discover them playing together again!  Do they speak?  Was that a smile?

Oh, no!  This forest is not a nice place, not a nice place at all.  Lucky and Squash may have hatched their final escapade unless their people arrive immediately.  Love and friendship seek and find...finally.


There is a gentle rhythm to the telling of this tale.  Jeanne Birdsall, as she said in her TEDx talk, has watched, listened and remembered getting to the heart of how dogs might carry on a conversation with one another; an underlying humor is present in their persistence.  As they journey to the beach, the city and the forest, a phrase is repeated each time,

...they escaped and traveled for a day and a night, carefully leaving clues along the way.

For readers this connects each of their attempts but it also sprinkles a wee bit of magic into the narrative.  And that makes all the difference.


On the back jacket and cover readers can see the real Scuppers and Cagney sitting side by side in a garden looking right at them.  As their eyes shift to the right the two happy friends are running down the beach, side by side, looking at the readers.  Perhaps as foreshadowing Squash and Lucky are running along the fence, on the same side, on the title page.

Jane Dyer's watercolor pictures rendered in full color convey an welcoming warmth and charm.  She, too, captures the essence of dog showing them diligently digging under the fence time and time again or peeking between the slats.  When they make their escapes their activities mirror those of humans; building sand castles, snorkeling, a carriage ride in New York City or a visit to the Statue of Liberty.

Alternating between  double page, full page, or partial page pictures or small insets on a single page adds interest and invitation.  While the expressions on all the characters leave no doubt as to their personalities or current state of emotion, the close-ups of Lucky and Squash are total canine cuteness.  For an added touch of humor I particularly like the appearance of an "Absolutely No Digging" sign on the fence when they escape underneath for the third time.


What's not to love about Lucky and Squash written by Jeanne Birdsall with pictures painted by Jane Dyer?  This happily-ever-after modern day tale with match-making dogs will warm the hearts of readers of all ages; expect requests for repeat readings.

Embedded in Jeanne Birdsall's name is a link to her web page for this title.  By following this link you can browse inside the book at the publisher's website.  Just in case Mr. Bernard looks familiar to you, check out this blog post.
Posted by Xena's Mom at 7:24 AM