And Then The Sun Came Up

Twelve years ago I became acquainted with one of the first books written by Lauren Thompson other than her delightful Mouse's First series.  The title was One Riddle, One Answer (Scholastic Press, March 1, 2001).  One Starry Night  (Margaret K. McElderryBooks, October 4, 2011) is the first title she authored which I reviewed on this blog.  To me from those titles, plus others, I have come to believe Thompson truly has the gift of conveying much with a few carefully selected words.

Where's Walrus? is the first title (written) and illustrated by Stephen Savage clearly demonstrating his wordless wizardry with which I was familiar.  Again he charmed me with his newest title released this fall, Little Tug.  Whatever his medium, Savage depicts an invitation to his readers, a sense of warmth.

When these two notable artists first collaborated with Polar Bear Night (Scholastic Press, October 1, 2004) the results were, and still are, extraordinary; the title winning numerous prestigious awards.  On December 5, 2012 when Stephen Savage tweeted about a book trailer for a new work by he and Thompson, I quickly watched it.  For a person like me who enjoys picture books, understanding the process employed by either the illustrator or the author increases the bond between the creator(s) and the reader. 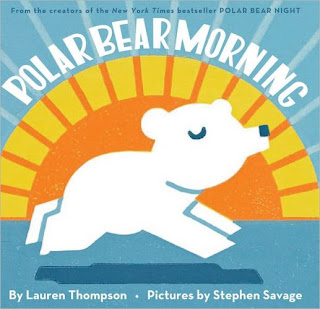 Within a week Savage tweeted about an interview explaining the steps taken in creating his various works given at the blog Pen & Oink.  At this point I had not held a copy of Polar Bear Morning in my hands but I could hardly wait; something told me it would be golden.  Like a sunrise on the new year on January 1, 2013 Polar Bear Morning (Scholastic Press) written by Lauren Thompson with pictures by Stephen Savage was revealed to the world.


THE MORNING IS CHILL AND BRIGHT.
From her cozy den, a polar bear cub peeks out
at the snow and ice and clear blue sky.

Serenaded by the calls of wheeling seagulls overhead the little polar bear continues on her walk over the icy landscape.  But wait...what's that tumbling down a hill?  It's a cub covered in snow.  A greeting is made in silence.

Much as the moon followed polar bear in Polar Bear Night, she follows this new little snow cub.  Climbing up and rolling down hills, they move toward the sea as fast as they can.  Seals, whales, and walruses each enjoying morning's first light are passed by in a rush.

Before they know it, the vast expanse of the sea is spread before them.  What's a polar bear to do?  Jump in, dive and swim in perfect tandem.  A floe is found for the friends.


Although I have never visited the far northern regions in which the little polar bear lives I have been a resident of northern Michigan for many years.  I have logged thousands of miles worth of walks in the snow along the shores of Lake Michigan.  With her spare text in this narration Thompson captures the sensory experience "to a tee."  As a reader you feel the cold, smell the water, and see the brightness of the sun's reflection on the snow and icy waves.  The descriptive exhilaration of the two cubs at play is irresistible.  Without rhyme Lauren Thompson instills a type of cadence in her writing bringing readers into the rhythm of life in the Arctic, into the rhythm of two-like minded creatures.


As is my custom when I first held Polar Bear Morning, I opened the jacket and cover.  The cheerful contrasting colors of the front, yellow and orange with the blues and stark white are tempered with the back illustration, blues and white feature the new cub, only head and feet showing beneath a snowy coating.  The title page in shades of turquoise has polar bear peering at the readers, his sleeping mother next to him, followed by the next two pages of him peeking out the darkened cave into the daylight.

All of Stephen Savage's linocut illustrations, printed on Thai mulberry bleached rice paper using water-based ink, span across both pages, a reflection of the extent of polar bear's habitat.  This is counterbalanced by the textures created through his illustrative technique which generate an intimacy with the reader; you want to touch every single page.  Most of the pictures are done in varied hues of blue and blue-green except for the coloring on the animals until Savage surprises with a background representing the morning sky touched by the rosy rays of the sun.


Author Lauren Thompson and illustrator Stephen Savage have collaborated to give we readers another endearing gem.  The setting may be chilly but the story is full of heart; the kind of heart that will warm you from the tip of your toes to the top of your head, through and through.  One can only hope polar bear might have another adventure.

Links are embedded in each of their names taking you to their respective websites.  Links attached to each of their titles provide my previous reviews.  Here is a link to an interview of Stephen Savage at Seven Impossible Things Before Breakfast with Julie Danielson on Monday of this week.  It is outstanding.
Posted by Xena's Mom at 7:30 AM