In ancient times it is written a sneeze was viewed as a good omen; believing, as they come unbidden, the gods must have caused it.  If a sneeze was heard when one was speaking then it must be the truth or if a new venture was being undertaken it would be successful.  Even though there is no definitive reason, the act of blessing someone who has sneezed dates back to the time of the Caesars. 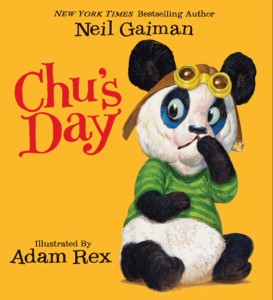 It seems certain superstitions are attached to sneezing depending on the culture from which they come. Certain Asian cultures believe one is being talked about if they sneeze; even the number of sneezes have meaning.  All these notions pale in comparison to the unexpected (at least from the reader's view) potential of a sneeze happening on Chu's Day (Harper) written by Neil Gaiman with illustrations by Adam Rex.

Chu, a little panda guy, begins his day with a trip to the library with his mother.  Everyone knows about the dust which loves to live in books.  Will this be the moment a sneeze pops out?

Midday he meanders into the diner with his father for a bite to eat.  People enjoying their lunch tend to spice up their meals with a bit (or more) of pepper.  Will this be the moment a sneeze pops out?

What a surprise!  Chu and his parents are going to the circus.  He tries to get their attention.  He really has to speak with them.

His final sentence is uttered with nary a soul hearing.  Then the bad thing happens because Chu sneezes.  He's truly sorry but what's a little panda guy to do.


Neil Gaiman has a masterful command of language and pacing.  Up until the circus when Chu wants his parents to listen to him, a single sentence suffices to tell the reader precisely what they need to know, not a syllable more.  (Although, a careful reader will wonder why his parents question whether he is going to sneeze.  Do they know something?) With the addition of more sentences, tension builds like blowing up a balloon until it pops.  When Chu speaks again, one word conveys complete comic relief to the point readers will be unable to restrain their laughter.  Again on the last page Gaiman uses one word, a word to close the day, the story and, in Chu's mind, his sneezing mishap.  All is right in Chu's world.


True to form, when I held Chu's Day in my hands for the first time, I opened up the jacket and cover; mirror images of each other.  Chu's attire, the green striped shirt and the pilot's helmet with goggles, coupled with his expression, immediately sets the stage for events to come.  On the back cover we see...the back of Chu with a snail behind him facing toward the reader.

Adam Rex surrounds most of his illustrations with white space with the exception of the colorful, bright scenes in the library, the diner, the circus, and the sneeze.  This contrast brings the reader right into those paintings looking over the intricate details.  I could happily frame the library scene to hang in my home; the mice on computers inside the card catalog drawers, the animal caricature for the national library symbol.

The features on the characters are lively and comic, especially the parents.  Even now, I'm unable to keep from laughing looking at the library and diner visuals during the sneeze and the circus after it has passed.  Looking for the snail throughout provides added interest and fun.


If you're looking for a lively story about a panda with a preposterous problem, then Chu's Day written by Neil Gaiman with illustrations by Adam Rex is exactly the book for you and your readers.  The pairing of the spare text with the expressive, full-of-life, illustrations is guaranteed to bring on an abundance of gleeful giggles.

Here is a link to a wonderful interview of Adam Rex on the Bookie Woogie blog several years ago.  The link embedded in his name is to his website.  UPDATE:  Since the release of this blog post, Adam Rex wrote a wonderful post, How I Make a Picture Book,  describing his process for this title.

Here is a link to a poster celebrating Chu's Day.  A four page activity guide for Chu's Day is linked here.  At this page you can see inside some of the pages in Chu's Day.

Embedded in Neil Gaiman's name above is the link to his website for children.  This link is to his blog post about Chu's Day.  At this site Neil Gaiman reads Chu's Day aloud nearly in its entirety.

Here is the book trailer for Chu's Day.


And finally I could not resist sharing this short clip of a baby panda sneezing.