To Bloom Where You Are Planted...

There is no question about the value of picture book biographies based on solid research written to inform and connect with the reader; illustrations evoking a culture, a historical climate and the person's place in each of those.  In the space of thirty-two pages a masterful author and illustrator can focus on the significant events of the selected individual's life making their struggles and triumphs relevant and timeless for any age.  It is the person who we may think has the least in common with us that is the most similar. 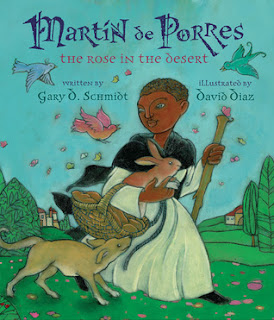 In May of 1962 a man who lived sixty years, born in 1579, was canonized, the first black saint in the Americas.  Author Gary D. Schmidt, two time Newbery Award Honor winner, and illustrator David Diaz, winner of the 1995 Caldecott Medal, compliment and enhance each other's skills in the summer 2012 release of Martin de Porres: The Rose in the Desert (Clarion Books, an imprint of Houghton Mifflin Harcourt).  This is a life to be remembered, a life which can give hope to many.

Anna Velazquez hurried out of the barrios of Lima and onto the plaza.  She carried a quiet baby, wrapped closely so that no one could see him---but no one was looking.

This woman, a freed African slave, is making her way to the cathedral to seek baptism for her child.  The boy's father, a Spanish nobleman, is not present.  Not pleased with this the priest nevertheless completes the christening.

Living in the abject poverty of the barrios of Lima, Peru, Martin and his younger sister Juana are haunted by hunger and illness until at the age of eight his father, Don Juan de Porres took them both to Ecuador.  Several years later back in Lima Martin becomes the apprentice of a cirujano, a type of doctor, per his father's arrangements.  It is during this time Martin's gifts begin to shine; his healing abilities, his capacity to make things grow quickly and well.

Due to his race, Martin is not allowed to study to be a Dominican brother but at the age of fifteen he is allowed to enter the monastery to serve the others doing menial tasks; sweeping and washing floors, cutting hair, opening doors and cleaning baths.  Father Lorenzana realizes through tales being told that Martin is no ordinary young man; his talents are increasing.  Martin's devotion to healing people in the barrios, spreading to include people from all walks of life, becomes legendary as does his care for dogs.

Within thirteen years that which was written was broken.  Miracles multiplied; being seen in two places at once, candle-carrying angels lighting his way and those trees he planted bore fruit all year long.  In 1639 voices floated from the monastery to be joined by voices in the streets of Lima, a Mother's belief, "He is a rose in the desert." was no longer blooming.

There is a particular, unique, quality to the writing of Gary D. Schmidt; drawing readers into a place so completely you believe you are there.  The easy flow of his narrative mirrors the spare life of Martin de Porres but there is also an undercurrent of richness to be felt in the telling, a richness revealed and received by all whose lives were touched by Martin de Porres.  Schmidt's technique of repeating what the slave boys, Spanish royals and priests see and say in a given set of circumstances places emphasis on the class differences but also highlights the faith of each, their willingness to believe.  It strengthens the importance of the saint's beginnings and the obstacles overcome to do what he did.

A young Martin de Porres simply clothed as a servant of the Dominican brothers surrounded by shades of green and followed by the smallest of creatures (spread across the front and back jacket and cover) begins the tale of a quiet, servant who rose to miraculous achievements.  Opening and closing endpapers, a vibrant but soft shade of rose, encase the mixed media illustrations of David Diaz. An older Martin head bowed, a golden-orange glow framing his face graces the title page.

All the pictures span two pages with the text set in various spots; never a distraction but a part of each.  On three of the visuals smaller illustrations showcase a particular part in the retelling; a baptismal font, a lemon tree and a rose. The color palette, the shades of green, blue, red, gold and brown, simply glow.      Perhaps my favorite illustration of all is Martin moving through the arched cathedral hallways at night, two angels flying by his side, lanterns in hand, as he carries bread to feed to the poor, a dog walking by his side.

With the richness of Gary D. Schmidt's writing matched by the peaceful, luminosity of David Diaz's illustrations, Martin de Porres: The Rose in the Desert is picture book perfection, a biography to be relished repeatedly.  Readers young and old alike will be able to identify with the barriers Martin faced in his life but can also take heart in knowing barriers can be surmounted in more ways than one.
Please follow the link embedded in Gary D. Schmidt's name to view his website.  This is a link to a Scholastic interview of David Diaz.
Posted by Xena's Mom at 5:17 AM