I recently reread an article in Psychology Today written by Pamela Brown Rutledge Ph. D., M. B. A. in Positively Media titled The Psychological Power of Storytelling.  Two phrases from six of her main points which resonate are:

Stories are about collaboration and connection.  They transcend generations, they engage us through emotions, and they connect us to others.

Stories are how we are wired. ... To the human brain, imagined experiences are processed the same as real experiences.

And more recently an article written by Leo Widrich titled The Science of Storytelling: Why Telling a Story is the Most Powerful Way to Activate Our Brains another interesting point is:

When we are being told a story, things change dramatically.  Not only are the language processing parts in our brain activated, but any other area in our brain that we would use when experiencing the events of the story are too. 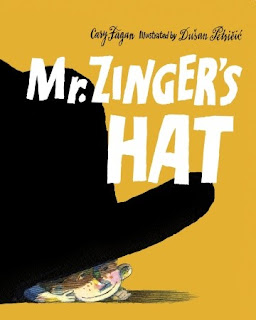 For these reasons coupled with personal experience, I am continually looking for books to excite listeners to the sheer power, the fun, of story.  Sometime during the month of December author Ame Dyckman, Boy + Bot (Alfred A. Knopf) (reviewed here), tweeted about a terrific title she had just read, Mr. Zinger's Hat (Tundra Books, a division of Random House Canada Limited) by Cary Fagan with illustrations by Dusan Petricic.  At the first reading, as each page was turned, I became more and more excited.  You could not ask for a better book about story and storytelling.


Every day after school, Leo took his ball into the courtyard.  He threw the ball high into the air.  It would hit the brick wall and bounce back, and Leo would try to catch it.

About the same time each day when Leo was throwing that ball, a neighbor, a writer of stories, Mr. Zinger would walk in circles around the courtyard where Leo was playing.  One day after school that ball bouncing got a little out of control; the ball soaring too high for Leo to catch it.  It flew toward Mr. Zinger knocking his hat into the air.

A breeze caught that hat, Mr. Zinger called for Leo's help and Leo scurried to get it.  Like a magnet to metal Mr. Zinger's hat settled right on top of Leo's head over his baseball cap.  This ordeal had Mr. Zinger a little frazzled so he asked Leo to sit a spell with him on the bench.

Mr. Zinger questioned why his hat took off like it did, peering to see what might be inside.  His reply was:

Through a series of questions, answers and imaginative musings Leo and Mr. Zinger made a story.  Should the story be about a man or a boy, will he be poor or rich, happy or sad and what exactly happened to this person?  With the story finished Mr. Zinger left to go back to his writing.

As Mr. Zinger walked away Leo's final question to him prompted a reply as true as time.  Least you think the tale is over, think again.  Leo went back to his ball and throwing it against the wall.

That ball went too high again.  A voice called out.  Play.  Bench.  Baseball Cap.  Guess what happened next?


Through word choice, dialogue between his characters, and pacing Cary Fagan manages to make the everyday magical.  The gap between generations is easily bridged through a mutual respect and the exchange of imaginative thoughts.  Using the hat as a receptacle for stories is a stroke of genius; capturing our thoughts, dreams, or ideas.


Choosing to make Mr. Zinger's hat the focal point of the front and back jacket and cover, the title page, verso and dedication page reinforces the title selection, its importance and, in the reader's mind, a question forms, "What is it about Mr. Zinger's hat?"  All the illustrations in this title are rendered in watercolor by Dusan Petricic.  Large amounts of white space act as frames around the different sized pictures, some single pages, others crossing the gutter, extending across two pages.

Readers cannot help being drawn to the animated features of the freckle-faced, red haired boy side-by-side the older gentleman with bushy white eyebrows, mustache and beard.  The casual bright play clothing, shorts, T-shirt, tennis shoes and ball cap of Leo contrast against those of Mr. Zinger, a dark suit and hat.  Petricic's technique of changing the style of the illustrations, more cartoon-like, to differentiate between the story within the story is a very nice touch.  These pictures, young and old, colorful and classic, soft and bold, enhance the idea of storytelling as a bridge between differences.  My two favorite visuals are the bench scenes; Leo looking inside the hat when Mr. Zinger holds it above his head and Leo holding his baseball cap so his new friend can look inside.


Mr. Zinger's Hat written by Cary Fagan with watercolor illustrations by Dusan Petricic is full of the might, the miracle, of making stories.  It's not hard to picture a group of students walking into an educational setting, being giving a hat as they enter and telling them that today "H is for Story".  The questions and answers will undoubtedly be as varied as the people themselves.  After hearing Mr. Zinger's Hat, I wonder what stories will emerge from inside their hats?