The Price of Getting Your Own Way

Though it's been decades ago I can still recall sitting in a large open air tent, the first hint of fall traipsing through the mountains of Tennessee, listening to the resonant voice of one of the finest Native American storytellers.  He held every single one of us spellbound with tales passed from generation to generation. Since that day there have not been many of his story compilations, picture books and novels that I have not read. 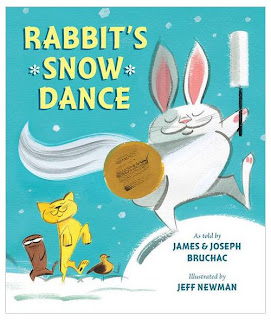 Master storyteller and author, Joseph Bruchac and his son, James Bruchac, author, storyteller and wilderness survival expert and tracker, combine their noteworthy talents in a new pourquoi tale, Rabbit's Snow Dance (Dial Books for Young Readers).  Illustrations for this telling are provided by Jeff Newman, author/illustrator of Hippo! No, Rhino and The Boys.  Together the three keep a traditional Iroquois story alive for readers of all ages.


Long ago, they say, Rabbit did not look the way rabbits do today.

The sweet little hare of field and forest known today for his or her cottontail, originally was the proud owner of a much longer version.  One might even go so far as to say, this pride contributed to an attitude of rude impatience.

It seems, even though it was the middle of summer, Rabbit wanted snow.  His big feet were perfect for walking on the surface allowing him to reach the more delicious morsels higher up in the trees.  With his gift of song and dance, he was going to make it snow.  Why wait for winter?

This was a huge concern for some of the animals unprepared for the colder months; chipmunk's, squirrel's, turtle's and beaver's fears were ignored.  Moose and Bear doubted he had the slightest chance of succeeding.  But he did.

Now, if you think Rabbit stopped his singing and dancing when the first flakes fell, think again.  He wanted more and more and more.  Some of his fellow critters were pretty happy about all this snow, others were definitely not.

Before too long, Rabbit is getting mighty tired of all this song and dance.  So he rests in the one place left uncovered by snow, the tip-top of the tallest tree.  All night and nearly all the next day, Rabbit slept.  But the sun, bright and warm, shined all day.  Near sunset this long-eared, long-tailed, large-footed ball of fur is in for a rude awakening; an awakening making changes that have lasted to this very day.


Even though the text is printed on the page, it speaks clearly, in a voice as rich and warm as if the story were being told aloud.  Joseph Bruchac's and James Bruchac's tradition as gifted oral tellers is equally evident in this written tale.  Perfect pacing, repetitive phrases, insertion of Iroquois words, and the rhythmic song chanted by Rabbit conjure up a picture of gathered listeners about a roaring fire, surrounded by silence except for the voice of one, as the snow swirls about outside on a wintry evening.


The first few snowflakes of that first snowfall pepper both the front and back endpapers, white on a deep turquoise blue.  Four small, different, dancing poses of Rabbit holding his drum grace the title page.  Rendered in watercolor, gouache and ink the illustrations vary in size and perspective.  One key element evident in all of them is the underlying humor; beginning on the cover with the four animals pictured.

Jeff Newman's visualizing of Rabbit, the setting and events is full of expression and motion; Rabbit stomping his feet when he wants what he wants, Rabbit's contemplative pose, or Bear and Moose watching him speed toward his home. His use of white space on four separate pages showcasing the song and the characters' reactions is absolutely delightful.  Reflective of the narrative his color palette is beckoning and bright.


Offering up an explanation for more than one truth found in nature, Rabbit's Snow Dance told by James and Joseph Bruchac with illustrations by Jeff Newman is a folktale treasure to be shared, remembered and passed on from reader to reader and reader to listener.  Trust me when I say, you need to read this out loud (I've tried it).  Before you know it your listeners will be repeating lines, singing and dancing along with Rabbit.