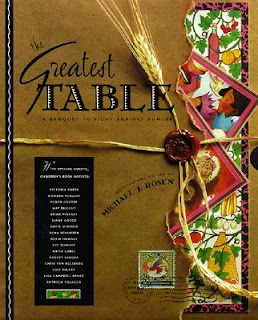 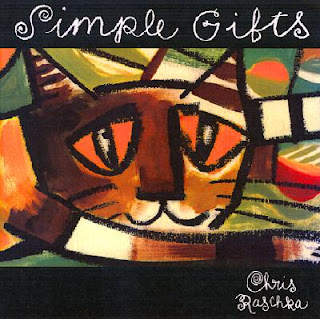 Last year in a post on Thanksgiving Day I spoke about two treasured titles I read every year for this day set aside to express our gratitude.  The first is The Greatest Table:  A Banquet to Fight Against Hunger (Harcourt Brace & Company, 1996) written and edited by Michael J. Rosen.  The other is Simple Gifts (Henry Holt and Company, 1998) by Chris Raschka.


This year the two titles I've chosen are lighthearted, full of fun, family and food.
The Most Thankful Thing (Scholastic, 2004) written by Lisa McCourt with illustrations by Cyd Moore explores an afternoon conversation with a mother and daughter while looking at a scrapbook.  A simple meal takes on huge proportions when the guests keep coming in Sitting Down to Eat (August House LittleFolk, 1996) by Bill Harley with illustrations by Kitty Harvill.

One morning, I found Mama sitting real still, all by herself.  Mama never did that.

Replying that she is thinking about all for which she is grateful, her daughter wants to know the one thing for which she is most thankful.  Of course the mother knows the answer to that right away, as readers will too, but she asks her daughter to guess.  Knowing all her mother's best moments are stored in her scrapbook, they sit down to peruse through the pages.

Summer camp, a soccer team championship, a guitar solo in a concert, yearbook editor, prom night, college play, first job and marriage are simply not Mama's most thankful thing whenever she's asked the question.  Even if each of them lead to bigger and better opportunities, they cannot compare to the most thankful thing.  Guessing this must be something pretty special, the daughter gives up and Mama...she gives in saying the final word, "Forevermore". 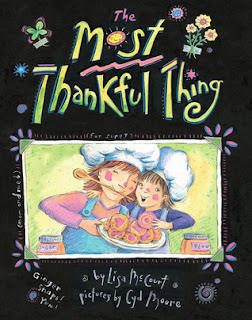 Using the tried and true format of her successful Stinky Face series Lisa McCourt provides a warm atmosphere of questions and answers between a mother and her daughter.  There is a comforting rhythm to the repetition of asking, commenting and the exaggerated probable future for each portion of the scrapbook.  McCourt's dialogue between the two demonstrates her gift of knowing family dynamics in a loving relationship.


Colorful, animated illustrations (watercolor?) loaded with life and laughter by Cyd Moore not only compliment but enhance the storyline provided by McCourt.  Her attention to detail and characters' expressions are delightful.  Two page spreads, single pages and small photographic insets create a pleasing arrangement; many times with the black background found in scrapbooks complete with photo corners and white writing along the edges.


I was sitting down to eat,
just about to begin,
when someone knocked on the door and said,
"Can I come in?"

A young boy is about to start his snack, opening the door what should he see, but an elephant.  This giant in the world of animals wants to share his meal.  Inviting him in, they are about to begin eating when there is another knock at the door.

And so it goes from one to nine.  Each knock adds another animal to the meal; elephant, tiger, bear, lion, hippo, rhinoceros, blue whale and crocodile are dining together.  The final knock, the ninth knock, reveals a very small caterpillar.  Will there be room or a big BOOM?


Bill Harley, songwriter and storyteller, a true master of both, has created a cumulative tale filled with critters having cravings, cravings for treats.  At each knock of the door a rhyming conversation follows until the next visitor arrives.  The rhymes flow creating a beat and...each dialogue ends with a thank you before the newest arrival sits down to eat.

When I opened up the door, what did I see?
It was a great big elephant looking at me!
I said, "Oh no! What can I do?"
"If you've got enough for one," she said, 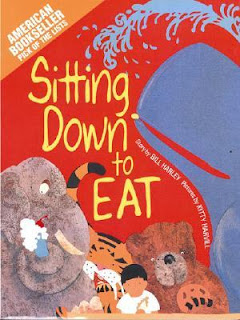 "you've got enough for two."


Cut paper collage illustrations skillfully arranged by illustrator Kitty Harvill, light up the storyline from cover to cover.  Various treats, popcorn, donuts, ice cream sundaes, Popsicles, pizza and cookies are scattered across warm orange endpapers.  A friendly, playfulness is evident on the faces of her animals and in their posture seated around the table.  Texture is added through her color selection and paper choices.  I really like the detail of the number of candles on the cake growing as more animals come to the boy's home.

These two titles are guaranteed to bring smiles and laughter.  Both make for a great read aloud, but Sitting Down to Eat is so much fun to do with voices and audience participation.  Be sure to follow the embedded links.