The closer it gets to December 24th the more children are checking their lists; probably more than twice.  On that night stockings will be hung, milk and cookies will be left, for one of the most anticipated visitors of the year, Santa Claus.  Oh, his name or attire may change as well as his method of delivery but his spirit of giving remains constant throughout the world.  His accomplishments are legendary. 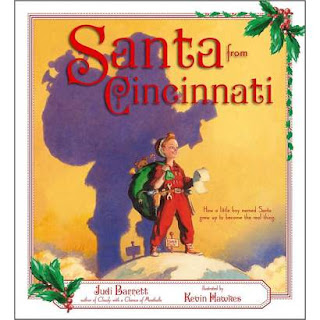 Have you ever been curious where Santa Claus was all those years before he went to the North Pole? Well, wonder no more.  Author Judi Barrett and illustrator Kevin Hawkes have teamed to tell the truth in Santa from Cincinnati (Atheneum Books for Young Readers).

I was born Baby Boy Claus at 12:02 AM at the Cincinnati General Hospital on December 25, many. many, many years ago.

Yes, we're going back, way back, to the beginning, getting the straight scoop from none other than the Jolly Old Elf himself.  You will not believe where Mr. and Mrs. Claus found the perfect name for the infant--in one of their bowls of alphabet soup!  As a first child and only child his adoring parents went nuts with the picture taking.

He was as typical as a baby could be except for one thing, his constant jolliness and...
his deep seated need for toys.  His favorite was a stuffed reindeer; not one but eight.  Having a dad with a toy-making workshop in the basement, was this boy's dream come true.

Imagine his excitement when he was old enough to assist and design his own creations.  The cleverness of these two, father and son, did not go unnoticed by the neighborhood kids.  Their requests were numerous and lists were made.  (Are you starting to see a pattern here?)

Despite giving to the local boys and girls, the piles of their artistic products grew and grew. What was the Claus family to do?  Santa has the gear and a plan which spreads from Cincinnati to the entire state before you can say, "Ho, Ho, Ho".

In between these annual deliveries Santa remains as normal as can be, going to school, keeping up with his homework, attending college, falling in love and getting married.  But all these life events are done with his own special twist; a college in the far, far north allowing him to major in toys and minor in business.  Step by step, year by year, Santa reveals how his love of playthings grew with all its twists, turns and traditions into the familiar figure known and loved today.


With little stretch of the imagination one can almost believe that author Judi Barrett found some hidden diaries penned by the hand of Santa Claus, the voice she gives him rings so true.  Using a straightforward, conversational tone filled with humor she has him tell his tale.  Ingenious specific explanations for each memorable moment enhance the story's flow.  Here's a sample below.

My mom and dad helped me load them onto some sleds I'd tied together.  Just as I was about to leave, I found more toys under my bed.  So I stuffed those into my pillowcase, flung it over my should, and I was off!


Using open acrylics and Prismacolor pencil on bristol board Kevin Hawkes takes the narrative giving it depth and breadth through his illustrations.  The front jacket and cover are loaded with hints, nearly a synopsis of the boy who becomes the man, feet firmly planted on the North Pole.  The shadow of the fully grown Santa behind the youth is brilliant.

The first page has only the title with a birth announcement underneath, the second contains more information with sleigh bells on ribbons framing the words.  Rich in color, extensive in detail the pictures throughout the remainder of the story are spread across two pages.  Hawkes ability to extend the storyline is impressive; the babies in the hospital ward are all crying in their caps but not Baby Claus, his wrap is red with snowflakes and his cap is bigger with a small white ball on the end as he lies there grinning.

Every chance offered by the text is used to its fullest.  Sometimes Hawkes chooses to do so using snapshots of Santa in a collage across more than one page, each carefully labeled with parental handwriting or his pages may be filled with a cast of characters in an array of expressions.  The text is placed in various positions in order to blend with the visuals; at times appearing as if on scraps of notepaper.  What Barrett does not disclose in the writing Hawkes completes in his laughter-inducing illustrations tinged with nods to the North Pole.  While there are many pages to appreciate in this book, my favorite is the last two-page spread, a close-up of Santa in his twenty-first century sleigh flying near Big Ben, a stuffed toy reindeer sitting on the gadget laden dashboard, with another live reindeer hanging upside down, looking out at the readers as Santa turns to give us a smile.


Santa from Cincinnati written by Judi Barrett with illustrations by Kevin Hawkes is filled with all the joy one would expect in the life of this remarkable man of mystery prominent in many cultures.  Their combined efforts will have readers believing this to be true and loving every minute of the story.  "Who knew?" will be replaced with "Well, that makes perfect sense." as readers laugh out loud.  Most assuredly this will be a holiday favorite for many years to come.
Posted by Xena's Mom at 7:04 AM