When you've lived your entire life in the State of Michigan, chances are you will either be on, in or by water much of your life.  Countless hours walking beaches, swimming until your skin turns prune-like, tracking freighters or strolling through marinas are the order of the day in more seasons than one.  Sailboats, kayaks, canoes, pontoons, small fishing boats and even a 1957 wooden Chris Craft have been a part of my boating life. 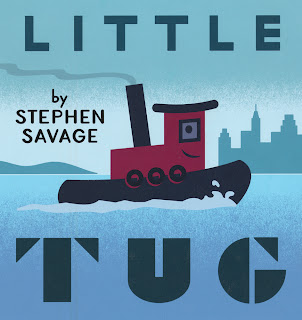 To be sure looking across the water, no matter the expanse, watching boats of every conceivable shape and size capable of a myriad of tasks, is not only interesting but for me peaceful.  It's also a way of imagining who or what might be on those boats or from where they've come or are going.  Stephen Savage, illustrator of Lauren Thompson's Polar Bear Night (Scholastic Press, 2004) and author/illustrator of Where's Walrus? (Scholastic Press, 2011)(reviewed here) showcases for younger readers possibilities in his newest title, Little Tug (A Neal Porter Book, Roaring Brook Press).

As readers are introduced to this cheerful, little red tugboat passing by the green light buoy, he is greeting the day as dawn colors the sky.  Sailboats, powerboats and ocean liners all are more than he is in height, speed and size.  He just keeps chugging along as if he knows something special, perhaps his place in this watery world.

But what can a sailboat do with no wind? What happens when the motor no longer goes on a powerboat? Traversing the harbor can be pretty tricky for those huge sea vessels.

Bright-eyed, grinning from bow to stern Little Tug knows exactly what he can do and he does it.  As the sun sets in the background after a day of pulling, pushing and guiding, one cheerful, little red tugboat is clearly feeling the effects of his hard day's work.  The tallest, fastest, and largest each repay his efforts with a kindness of their own as stars come out and the crescent moon rises.


With a minimal amount of text, easily understandable by the youngest of listeners and readers, Stephen Savage tells his tale.  He presents to readers the advantages of height, speed and size as well as the predicaments which may arise.  Through his word choices, taking readers through a day in the life of Little Tug, he paves the way for showing it's not about focusing on what you lack but how you use what you have to benefit those around you.


Unlike Polar Bear Night done using linocuts printed on bleached rice paper using water-based inks or the artwork...drawn and created in Adobe Illustrator for Where's Walrus?, Little Tug according to an interview with Stephen Savage in Publishers Weekly was drawn in charcoal.  Savage desired to add warmth to these illustrations which he accomplished to perfection.  Except for the title page white is used only to accent detail in the text and illustrations thus enhancing the mood of the story.

All of the visuals extend across two pages bleeding to the edges beginning with the publication information and dedication pages showing a port cityscape, a lighted bridge in the foreground, as the tiny red form of Little Tug glides over the water at night's end.  The small touches of animation on the boats, eyes, mouths, and mustache on the tall ship, endear readers to the characters.  Savage employs a color palette appropriate to a tale on the water but includes other shades to continue with the cozy feel of the book, pink, red, coral and salmon.  Little details, motions lines, shading, and the reflection of the sailboat in a calm sea, accentuate the overall storyline.


Stephen Savage's adept use of language and softly, textured illustrations in Little Tug reach out to readers; you want to hold it in your arms and give it a hug.  I encourage you to follow the link to Savage's website embedded in his name above as well as the interview linked to Publishers Weekly.  This link is to the publisher's website highlighting more illustrations from the book.  Head over to Watch. Connect. Read. to get the inside scoop on a Skype visit another teacher librarian had with Stephen Savage as well as Mr. Schu's comments about this title.