When you grow to love the characters in a book, the news that the author and illustrator are collaborating to create a second is cause for jubilation.  If the second title is as good as or even better than the first, a reader begins to hope, hope for yet another.  When the third volume appears you want to  climb the tallest tree with a megaphone and shout out the good tidings to anyone who will listen. 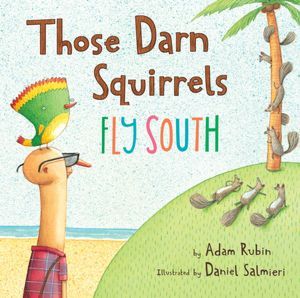 Since their initial entry into the world of children's literature with Those Darn Squirrels, followed by Those Darn Squirrels and the Cat Next Door, the duo of author, Adam Rubin, and illustrator, Daniel Samieri, have become known for their absolute hilarity.  Third in the series, Those Darn Squirrels Fly South (Clarion Books) is no exception. There is a marvelous magic in the number three.

Old Man Fookwire lived at the edge of town in a beautiful forest full of birds and squirrels.

If you looked up the definition of cranky, crabby and cantankerous in the dictionary, I give you one guess as to whose picture would be there.  Yes, indeed...Old Man Fookwire.  That guy seems to find fault with nearly everything except for the birds in the forest.  Seasons permitting, he paints pictures of them for hours each and every day.

With winter in the offing, he is not looking forward to the snowy, blowy days without their company.  Of course, he won't be entirely alone.  Oh, no, those darn squirrels will be wreaking havoc as per usual.  Unbeknownst to Old Man Fookwire, the inventive fluff-tailed creatures are hard at work on another of their ingenious plans.

Mr. Never Smiles is flabbergasted to hear strange sounds following the faint cries of his birds fluttering southward.  It's those darn squirrels in all sorts of flying contraptions!  Why should the birds have all the fun of frolicking in the sunny climes?

Weeks go by with Old Man Fookwire settling in for a long winter.  He is suddenly wakened by the strangest phone call.  It would seem that a trip needs to be made in his 1957 sports car.

It's doubtful anyone will ever be able to explain what happened at the end of that journey south.  Maybe it was because of those darn squirrels but when Fookwire arrived, he did something that even surprised him.  A word of warning, whatever you do, keep the squirrels away from your car.

Witty, declarative sentences string together to form an outlandish story told matter-of-factly which in turn induces loads of laughs.  Adam Rubin's gift of gab is further exemplified in the names of his bird types (not to mention the name Fookwire), his keen descriptions of place and events and sometimes in his use of a repetitive form for emphasis.  His ability to speed up, slow down, shift from one character's scene to another without losing the flow makes for jim-dandy reading.  Here is a single passage.

Fookwire pouted as the sound of flapping wings
faded into the distance.  He turned to go inside---
and heard a rustling in the trees.  A rustling
followed by a whir.  A whir followed by a buzz.

Rendered in watercolor, gouache and colored pencil, Daniel Salmieri's illustrations truly heighten and extend the prevalent humor.  His cover and jacket clearly predict the eventual "family" gathering on the warmer southern sands.  His title page features blue sky and a sandy beach with the bottom portion of a chunky tree in the center, showcasing a carved title, author and illustrator names with the "Fly South" written on paper tacked to the tree, six squirrel tales sticking out from behind.

Old Man Fookwire is characterized with long skinny arms and legs, bald head, glasses propped on a pointy nose and a mouth which from time to time appears almost beakish.  Perhaps he is assuming the qualities of the feathered friends he so admires.  Incredible detail in the squirrels' workshop as they perfect their modes of flight, following their take-off, travel, landing and celebration are fantastically funny.  Salmieri most definitely creates motion and mood expertly.

The only thing better than laughing out loud when you are reading a book by yourself, is to read it aloud with others, sharing in the laughter.  Those Darn Squirrels Fly South by Adam Rubin with illustrations by Daniel Salmieri is guaranteed to provoke gales of giggles and glee.  I dare you...I double dog dare you...to read this and not have an ear to ear grin plastered on your face more than once.
Posted by Xena's Mom at 6:45 AM