For The Very First Time

There are memories with emotional attachments so strong they will never fade, being permanently as vivid as the day they were created.  On the day a new puppy chooses you, for most children (and adults), this is a moment firmly planted and nurtured by our minds.  Even though the bond is fresh and new, its strength is assured. 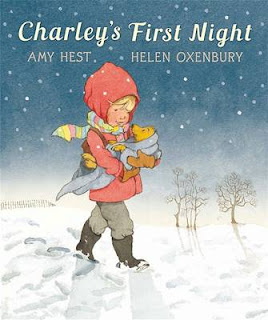 Despite their desire to be with you, puppies are used to being with their other brothers and sisters, a pack, gathering around and needing their mother.  Being freshly separated from what is comfortable, natural, to them is not easy.  In Charley's First Night (Candlewick Press) written by Amy Hest with illustrations by Helen Oxenbury, we are given an intimate, insider view of a boy's budding love, his understanding, of his new canine companion.

It was snowing that night, and Charley wanted me to carry him home.

Henry is out walking with his new puppy when it's clear the little guy is totally tuckered out.  With a gentle tenderness the puppy is wrapped in an old baby blanket, cradled in his new human friend's arms, who is ever so careful not to slip in the snow on the way home.  Once inside Henry introduces Charley to all the unique nooks and crannies in his house, reminding him that this is home.

His parents are very specific about who will be walking and feeding Charley.  Henry can hardly wait to

Mr. and Mrs. Korn also remind Henry that Charley will be sleeping in the kitchen even though Henry is sure he would rather sleep in his bedroom.  He can not imagine how his puppy will like being there at night...forever.  They fix up a large, soft, cozy bed for Charley under the table next to the heat register complete with Henry's old stuffed bear, Bobo, and a ticking clock.

Even though Henry waits for his pal to fall asleep before heading upstairs to bed, a crying awakens him in the middle of the night.  Quickly he runs to Charley, picking him up, comforting him and giving him another tour of the house.  It isn't until the puppy's soft snoring is heard that Henry leaves him in the kitchen once more.

When the whimpering starts much later, Henry runs to his friend showing him the moonlight, holding him close as they walk through the house ending up in his bedroom.  Amazingly enough Charley wants Henry to put him on his bed.  In the morning when a mother peeks her head in the bedroom door, guess what she sees?


With every turn of page it becomes abundantly clear that Amy Hest knows how a young boy thinks and feels about a new puppy under his care.  Through Henry's voice we walk in the snow, tour his home, listen to his parents and his unspoken thoughts in response, kneel down with him next to Charley's bed and run with him as he goes to comfort Charley.  Sentence by sentence, word by word,  Hest draws us into Henry's and Charley's first night together.  Here is but one example.

Charley curled up in a ball and I put my
face next to his and I waited for Charley
to fall asleep, and I thought about how my
mother and father sometimes used to wait
for me to fall asleep and soon Charley fell asleep.


Setting the tone for the entire book is the jacket and cover picture of Henry carrying Charley through their first snowy evening walk together.  Soft, warm brown on brown smaller versions of Charley in various poses are placed across the opening and closing endpapers.  Pale gray arching lines create a series of interlocking scallops acting as larger frames against the narrow gray lines around the text boxes on the left side and the illustrations on the right.

Helen Oxenbury's watercolor and pencil pictures paint a world as dear and charming as does Hest's text.  Within each of the text boxes she places a small significant visual enhancing the narrative.  She has captured with a sure, practiced hand the essence of a puppy and his human pal.  Every single one of her illustrations are worthy of framing.  My two favorite pictures are of Henry kneeling under the kitchen table to place his red wind-up clock next to Charley who is laying on his back, four paws extending in the air, with the stuffed teddy bear next to him.  The other is of Henry holding Charley in the darkened kitchen both of them looking out the window at the moon.


With the feel of a classic Charley's First Night with words by Amy Hest and illustrations by Helen Oxenbury is in every way a perfect picture book.  Every single reader who has every had a puppy or longed for one, will see themselves in this story.  The second most beautiful three words, coming after I love you, Read it again will be heard more than once...without a doubt.

To gain access to Amy Hest's website follow the link embedded in her name.  By following the link within Helen Oxenbury's name you are taken to a Reading Rockets video interview.  This link takes you to the publisher's website for a peek at a two page spread and a story hour kit with some possible follow-up activities.
Posted by Xena's Mom at 7:26 AM